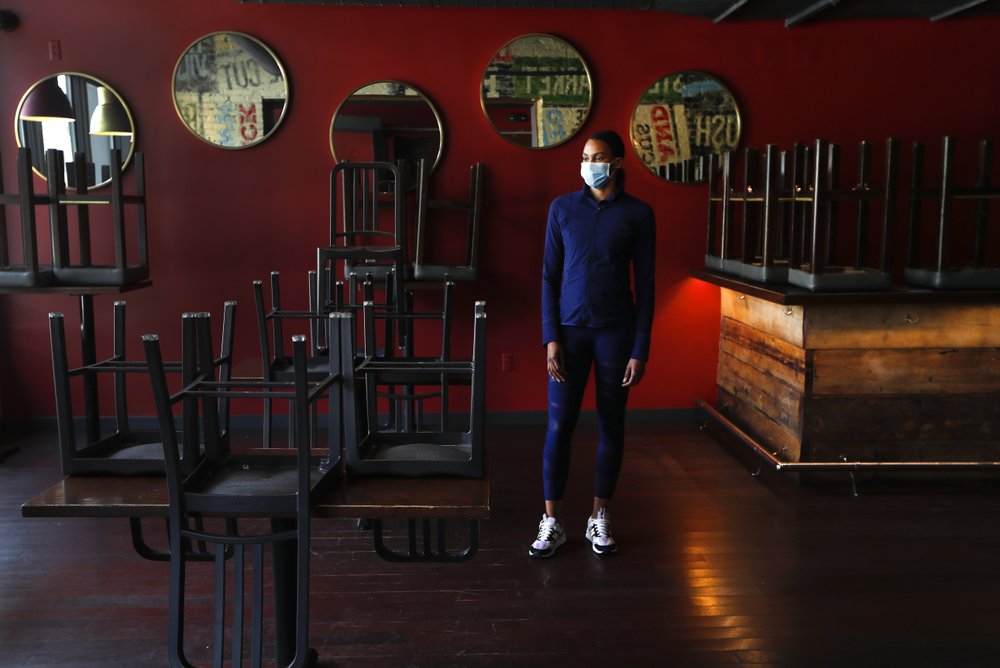 Stephanie Byrd, co-owner of The Block, poses for a photo with chairs on the tables while the restaurant is closed due to the coronavirus in Detroit, May 21, 2020. She’s worried other black-owned businesses will struggle to withstand another wave of economic uncertainty during the pandemic, following decades of inequity that made it hard for many to flourish in the first place. (Photo: AP)

Stephanie Byrd agonized over temporarily laying off nearly the entire staff at her family’s trio of Detroit businesses when the coronavirus pandemic hit.

But she’s not just concerned about the impact on their bottom line.

She’s worried other black-owned businesses will struggle to withstand another wave of economic uncertainty, following decades of inequity that made it hard for many to flourish in the first place.

“Most of the people I know who have businesses and are black are terrified right now,” said Byrd, whose family owns Flood’s Bar & Grille, The Block restaurant and the city’s Garden Theater. “There could be a new wave of black businesses that are able to reinvent themselves post-pandemic, but black businesses could also be wiped out for the most part within a black city. What would it look like without black-owned businesses?”

COVID-19 has disproportionately impacted black Americans, infecting and killing them at higher rates across the nation. But experts say the pandemic has also exacerbated existing economic disparities and raised fresh concerns about the survival of black businesses, many of which have been the backbone of cities like Detroit and Atlanta for years.

They also worry the pandemic could widen the existing black wealth gap. According to the Federal Reserve’s 2016 Survey of Consumer Finance, the median white family net worth of $171,000 is about 10 times greater than that of a black family’s, which is $17,150.

Black businesses historically have struggled to gain access to financing due to discriminatory lending practices and a lack of relationships with big banks. But civil rights leaders and historians say their struggles are also rooted in the simmering effects of racism and Jim Crow-era laws that enforced racial segregation and denied black people equal opportunities.

“Structural racism has created an environment where black businesses are starved for capital,” said Marc Morial, president and CEO of the National Urban League, a civil rights and urban advocacy organization.

Juliet Walker, founder of University of Texas at Austin’s Center of Black Business, History, Entrepreneurship and Technology, said black enterprises existed even prior to the Civil War. They especially thrived during a “golden age” from 1900 to 1930 in areas such as Tulsa, Oklahoma’s Greenwood District, known as Black Wall Street. But those moments were short-lived.

Tulsa’s once-thriving African American business community was destroyed in 1921 when a racist white mob killed hundreds of black residents. Black residents attempted to rebuild in the decades that followed, only to see their work erased during urban renewal of the 1960′s.

Detroit was once home to Black Bottom and Paradise Valley — two predominantly African American neighborhoods, the latter of which had more than 350 black-owned businesses and a music scene that drew the likes of Louis Armstrong and Billie Holiday.

Both were wiped out in the 1950′s and 1960’s, when a nearly all-white city government allowed the construction of a freeway system through the heart of the neighborhoods.

Jamon Jordan, a black historian based in Detroit, said the pandemic could have a similar crushing impact on black American businesses.

“Each time this happens, the amount of energy and time it takes to recreate something that’s even as simple as what was destroyed is monumental,” Jordan said. “Even though the coronavirus isn’t the fault of a single person or leader, the impact of the devastation on the African American community is part of a long legacy of discrimination and segregation for black people and black businesses.”

Some black business owners have also expressed frustration with the Small Business Administration’s $659 billion Personal Paycheck Protection Program, which was meant to provide small businesses with loans to keep employees on their payrolls during the COVID-19 crisis. The initial round of funding ran out in just 13 days, with complaints over lag times and confusion over the application process. However, the SBA made improvements in its second round and more than $100 billion remains available.

But the Center for Responsible Lending, a nonprofit group that works to end predatory lending practices aimed at low-income communities, said challenges remain.

“This is just a new public health crisis and economic crisis that is coming after so many decades and centuries of structural inequality,” said Ashley Harrington, the center’s federal advocacy director and senior counsel.

National Business League President and CEO Ken Harris said his team has been fielding hundreds of questions from members who are struggling to survive. The league, founded in 1900 by Booker T. Washington, is launching its own $1.8 million digital platform to help business owners gain access to funding.

“It’s going to be a rebuilding process and we’re going to have to focus on economic recovery,” Harris said.

“Black-owned businesses, we’ve always landed at the bottom of the totem pole as it relates to resources,” Cole said. “We put our blood, sweat and tears into these businesses and everything you’ve worked hard for can be lost in a matter of days.”

Several business companies and entrepreneurs, including Facebook, Magic Johnson and Mark Cuban, the billionaire owner of the Dallas Mavericks, have announced plans to help businesses owned by people of color, but some worry the assistance might come too late. 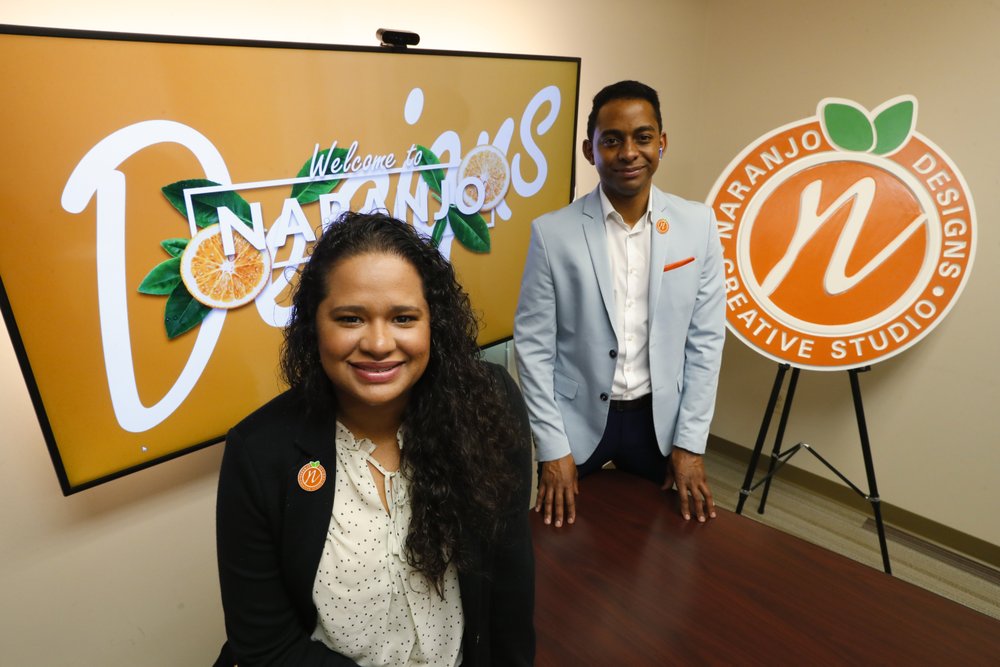 Jessika-Katherine Naranjo Colina, left, and Bernard Kanjoma, who co-own the graphic design and marketing firm Naranjo Designs, pose for a photo in Detroit. Kanjoma, who emigrated to the US from Malawi, said their 12-person team has seen an 80 percent drop in business but they’re identifying creative ways to weather the crisis, May 21, 2020. (Photo: AP)

The Michigan Minority Supplier Development Council, which represents minority-owned firms that serve the country’s automotive industry, took matters into its own hands and worked to identify lenders willing to help small firms.

“The difference for minority businesses is they can’t walk into a bank and get the same treatment and if anything, I believe COVID-19 has exposed much of our disparity,” said Michelle Sourie Robinson, the council’s president and CEO.

“A lot of our customers as well as businesses who are in the community, I’ve counted on one hand the number that actually applied and got funded,” said Teri Williams, president and chief operating officer. “Our community was really getting shut out.”

On Thursday, the SBA announced it was setting aside $10 billion exclusively for Community Development Financial Institutions, which work to expand economic opportunity in minority and other under-served communities.

Bernard Kanjoma and his fiancée Jessika-Katherine Naranjo Colina, who co-own the graphic design and marketing firm Naranjo Designs, said they received an $8,000 loan May 5.

Kanjoma, who emigrated to the United States from Malawi, said their 12-person team has seen an 80% drop in business but they’re identifying creative ways to weather the crisis.

“We have been heavily impacted and it’s been challenging but I felt like all the hardships that I went through with immigration and everything else to be where I am now, this is something that is just going to blow over,” Kanjoma said.