Tens of thousands of women gathered outside Australia's parliament and towns and cities across the country on Monday to take part in rallies calling for gender equality and justice for victims of sexual assault.

The March 4 Justice rallies were spurred by a recent wave of allegations of sexual assault, discrimination and misconduct in some of Australia's highest political offices. 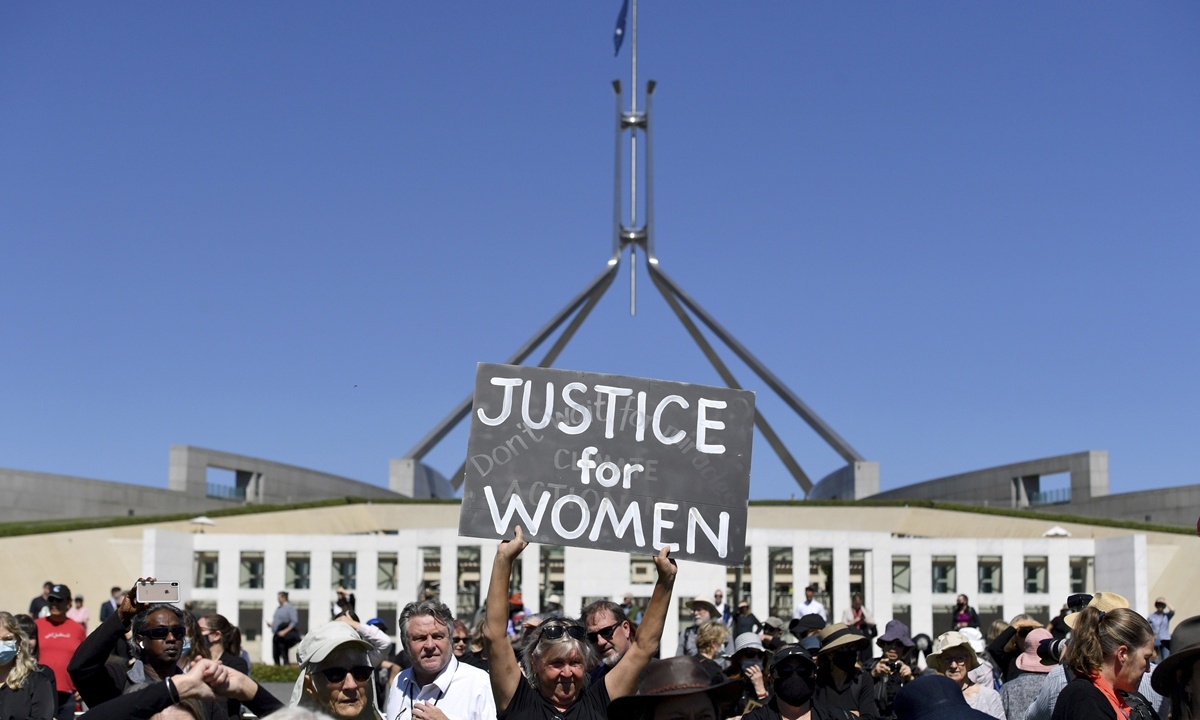 A protesters holds a placard during the Women's March 4 Justice in Canberra, Australia, Monday, March 15, 2021. The rally was one of several across Australia including in Sydney, Melbourne, Brisbane and Hobart calling out sexism, misogyny and dangerous workplace cultures. (Photo: VCG)

Women wore black to signal "strength and mourning," carried banners with slogans including "Shatter the silence. Stop the violence" and joined "We will not be silenced" chants. Protestors in Melbourne carried a meters-long white banner bearing the names of all the women killed in Australia from gendered violence since 2008, while those outside Parliament House in Canberra prepared to deliver two petitions demanding change.

A delegation of organizers rejected an invitation to meet with Prime Minister Scott Morrison in private, while leaders of the major opposition political parties came out to join the crowds. "We've come to his front garden," Janine Hendry, one of the organizers, told Reuters outside Parliament House. "We are 200 meters from his office and it's not appropriate for us to meet behind closed doors especially when we are talking about sexual assault which does happen behind closed doors."

A spokesman for Morrison said there was a standing offer for a private meeting and declined to comment further.

Recently reported scandals include rape allegations against Attorney-General Christian Porter, who has strongly denied the alleged 1988 assault, saying it simply did not happen.

Porter lodged defamation proceedings in Australia's Federal Court on Monday against the Australian Broadcasting Corp over a news article on the alleged rape, his lawyer said.

A senior political adviser for Morrison's Liberal Party has also been accused by several women of rape or sexual assault. The man has not been named, nor commented publicly on the allegations.

The public anger over the government's handling of alleged incidents of sexual assault mirrors the sentiment on display in London over the weekend, where protests were held following the killing of 33-year-old Sarah Everard, who disappeared while walking home at night-time.

In Australia, women gathered not only in major cities, but also in smaller centers like the seaside town of Torquay, where protesters lined up on the beach to form the word "justice."

Deirdre Heitmeyer, aged 68, said she drove for more than six hours to attend the protest outside Parliament House. "I can't believe we have to still do this. We were out in the 1970s calling for equality and we are still here," she told Reuters.

The allegations are expected to dominate parliamentary proceedings over the next two weeks.