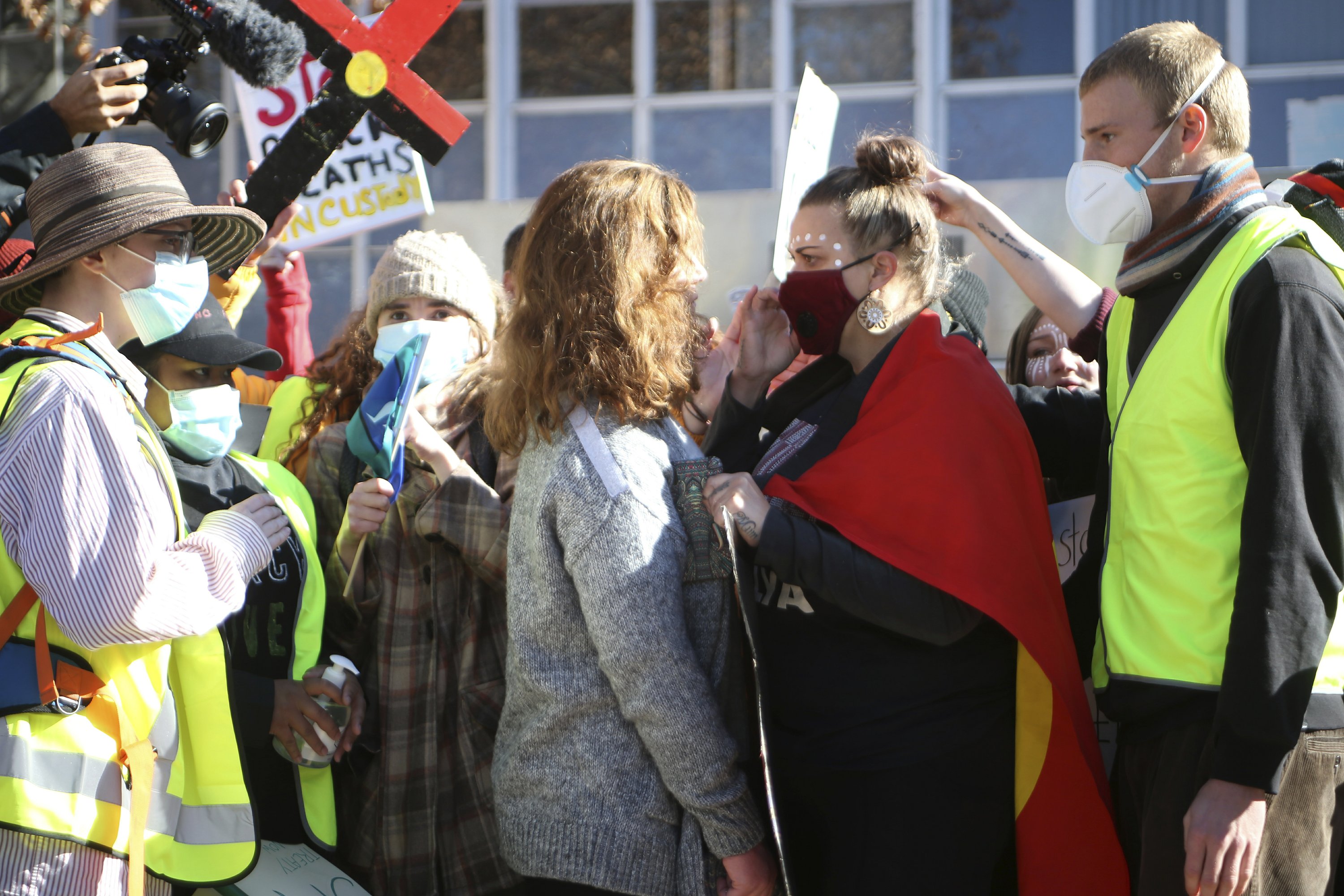 Protesters face off after one protester, center, interrupted a speech during a rally in Canberra, Australia, on Friday, June 5, 2010, prompted by the death of George Floyd, who died after being restrained by Minneapolis police officers on May 25. (Photo: AP)

Black Lives Matter protests across Australia on Saturday proceeded peacefully as thousands of people in state capitals honored the memory of George Floyd and voiced their anger at the deaths of indigenous Australians in custody.

Organizers of the Sydney protest got a late reprieve when their appeal against a Friday ruling declaring the rally unauthorized was granted. The New South Wales Court of Appeal, just 12 minutes before the rally was scheduled to start, gave the green light, meaning those taking part could not be arrested.

It appeared to be a moot point as up to 1,000 protesters had already gathered in the Town Hall area of downtown Sydney ahead of the decision.

Floyd, a black man, died in handcuffs while a Minneapolis police officer pressed a knee on his neck even after he pleaded for air and stopped moving.

In Sydney, there was one early scuffle when police removed a man who appeared to be a counter protester carrying a sign saying, “White Lives, Black Lives, All Lives Matter."

Crowds filled Victoria Square in Adelaide after police gave special permission for the event to proceed despite COVID-19 restrictions. The march through the city was held after Commissioner Grant Stevens approved the rally on Friday.

“This is a unique and extraordinary event. There is a sentiment that suggests people should have a right to protest on significant matters,” Stevens said.

In Brisbane, the Queensland state capital, organizers said about 30,000 people gathered, forcing police to close down two major streets. The rally appeared orderly as police handed out masks to protesters and other officials provided hand sanitizers.

A Maori group did a traditional haka, or war dance, during the Brisbane protest. The large crowd later marched to a local police precinct, some chanting “They say justice, we say murder.”

On Friday, 2,000 demonstrators gathered in the national capital Canberra to remind Australians that the racial inequality underscored by Floyd’s death was not unique to the United States.

“Australians have to understand that what’s been going on the United States has been happening here for a long time,” said Matilda House, an elder of the Ngambri-Ngunnawal family group who are the traditional owners of the Canberra region.

A demonstrator who interrupted House, arguing that the rally’s focus should be on “what’s happening in the United States” rather than Australia’s colonial history, was shouted down in a heated confrontation with several protesters. The demonstrator eventually followed the crowd’s advice to leave.

Indigenous Australians make up 2% of the Australian adult population but 27% of the prison population. They are also the most disadvantaged ethnic minority in Australia and have higher-than-average rates of infant mortality and poor health, as well as shorter life expectancy and lower levels of education and employment than other Australians.