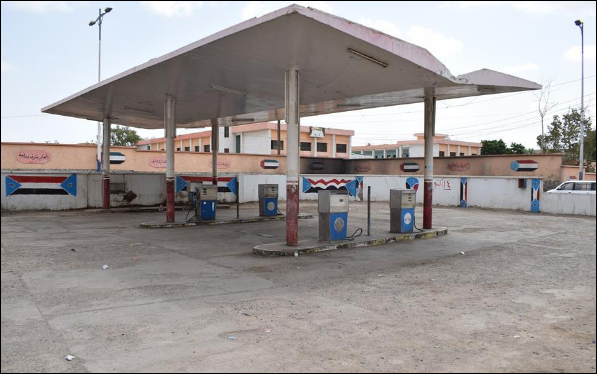 The situation in Aden, where Yemen's government is based, led some petrol vendors to exploit the crisis through a thriving black market to sell fuel subsidies with skyrocketing prices.

Hopeless Yemeni citizens were forced to buy petrol from black market traders to continue their life despite exaggerated prices.

Arwa Abdullah, a female accountant at a local bank in Aden, expressed her desperation as a woman to use the balckmarket oil.

"I refuelled my car from the black market because I have work and cannot join the long queues to get fuel like men," she complained.

Abdul-Raqeeb Musa, another Yemeni ordinary citizen, said the country's recent fuel crisis is "a fresh curse" added to the already miserable life of Yemenis in the war-torn Arab country.

"The cost of basic commodities, transport, and many other things have gone up sharply as a result of the fuel crisis," he said.

"All aspects of life in Aden are affected badly by the severe fuel crisis and citizens can do nothing about it," Musa concluded.

In the Yemeni coastal city, the main streets appeared empty, as vehicles and motorcycles formed long lines outside petrol stations, waiting for their turn to refuel.

Meanwhile, thousands of Yemeni citizens, including students and employees, found it more difficult to reach their destinations or workplaces.

Frustrated drivers and motorcyclists expressed their anger, calling government authorities to provide solutions to the fuel crisis at the soonest.

"Instead of struggling to meet livelihood and other basic needs for my family, I have been waiting in the queue since last night to refuel my car," Ahmed Rashid, an Aden-based driver, told Xinhua.

"The oil crisis aggravated at an unbelievable rate and getting 20 liters of petrol has become a dream in these days," Rashid said, standing behind his vehicle.

"The role of the government authorities is totally absent and the citizens are left alone to confront numerous crises," he lamented.

Some Yemeni citizens blamed the Ministry of Oil and Minerals for refraining from explaining the severe nationwide fuel shortage.

"Fuel shortage in northern provinces is caused by the ongoing fighting and blocking main roads there, but in Aden we actually don't understand what's going on," said Saleh Mohammed, a Yemeni citizen in Aden.

He demanded reasonable explanations from the government about the current fuel crisis and even worse economic situation in Aden where "no fighting is taking place."

Many southern citizens said Aden and other main neighboring provinces, controlled by the internationally-backed government, witnessed no progress in living conditions.

The government-controlled southern provinces seem to have not economically benefited from the interference of the Saudi-led Arab coalition, and remain as destitute as their northern counterparts ruled by Iran-backed Houthi rebels, they said.

Yemen has been locked into a civil war since Iran-backed Shiite Houthi rebels overran much of the country militarily and seized all northern provinces, including the capital Sanaa, in 2014.

Saudi Arabia, along with several other Arab countries, intervened militarily and began pounding the Houthi-controlled capital Sanaa in March 2015 in response to an official request from Yemeni President Abd-Rabbu Mansour Hadi to protect his country.

The internal military conflict between Iran-backed Houthis and the Saudi-backed Yemeni government recently entered its fourth year, aggravating the suffering of Yemenis and deepening the world's worst humanitarian crisis in the country.

Three quarters of the Yemeni population, or more than 22 million people, urgently need humanitarian assistance, including 8.4 million people who struggle to find their next meal.