A refrigerator out of power is seen at a bakery, during a massive blackout in Caracas, Venezuela December 18, 2017. Photo: REUTERS/Marco Bello

A blackout hit parts of the Venezuelan capital Caracas as well as the nearby states of Miranda and Vargas during the afternoon on Monday, in what critics said was another sign of the oil-rich nation’s economic meltdown.

Authorities blamed the outage, which began around noon (1600 GMT), on the collapse of an important cable linking a power plant and a transmission tower. Energy Minister Luis Motta said service would be fully restored by late afternoon.

The fault affected some phone lines and parts of the Caracas metro. Local media said the main Maiquetia airport just outside the capital was also impacted.

Many workers had no choice but to walk home, shops and restaurants closed, and Venezuelans grumbled that another day was disrupted by tumult.

The country is already grappling with the world’s fastest inflation, rising malnutrition, and disease as the state-led economic system grinds to a halt.

“Venezuela has fallen apart,” said David Garcia, 38, as he queued for a hotdog at a stand in the wealthier Chacao neighborhood. He had spent two hours looking for an open restaurant because he could not cook at home. 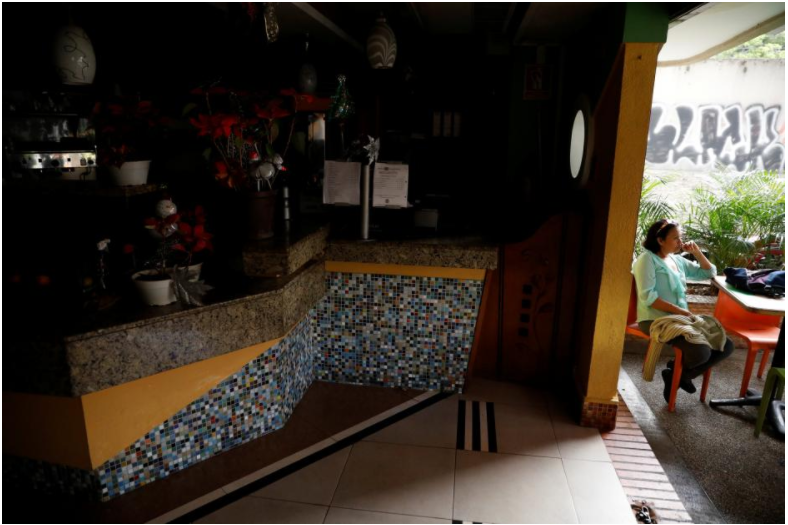 A woman sits outside a restaurant, during a massive blackout in Caracas, Venezuela December 18, 2017. Photo: REUTERS/Marco Bello

Venezuela has in recent years suffered frequent blackouts that critics attribute to insufficient investment following the 2007 nationalization of the electricity sector. The government has in some cases attributed the blackouts to sabotage.

“This is a symptom of a country collapsing due to the negligence of those in power,” tweeted opposition lawmaker Tomás Guanipa.

Energy minister Motta said crews had identified the problem and were working to solve it quickly. “Once we’ve fixed the cable we need to wait to stabilize the system,” he said during a brief interview on state television.

He did not give figures for how many homes and businesses had been affected.

Shopkeepers complained that the outage had hurt business, and worried about what would happen if it continued past dusk, given the country’s high crime levels.

“It’s a lost day,” said Armindo Gomes, 24, whose Portuguese family runs two bakeries, as he pointed at dough, cheese and meat that should be refrigerated.