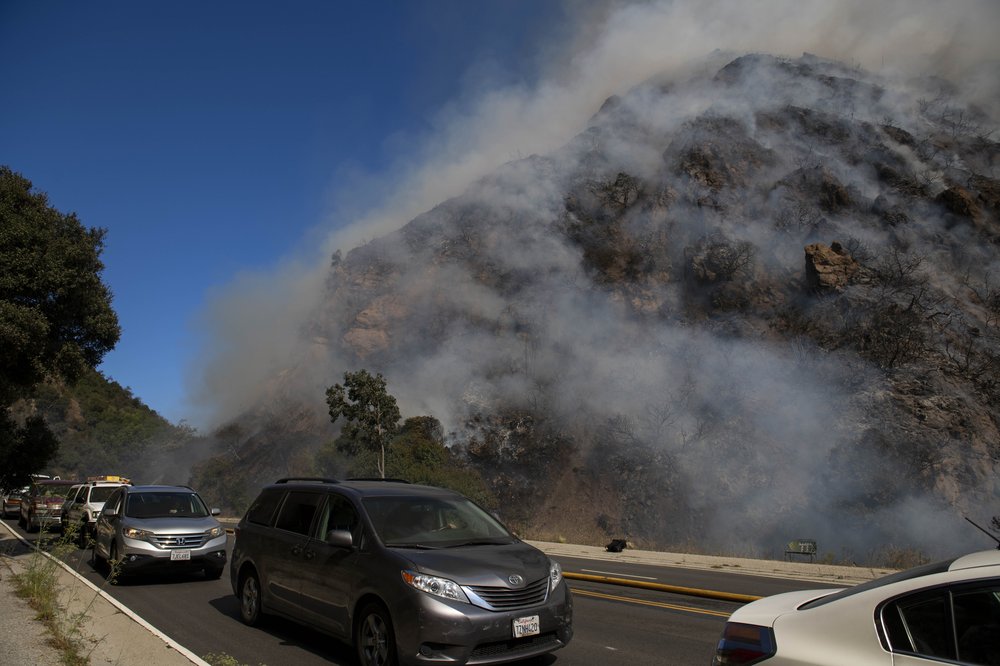 Residents flee the area as a wildfire erupts in the Pacific Palisades area of Los Angeles, Monday, Oct. 21, 2019. (Photo: AP)

Hundreds of thousands of California residents braced for another possible power outage as the state’s two largest utilities warned that a return of dangerous fire weather could prompt shut-offs across the state.

The warning from Pacific Gas & Electric about a possible blackout Wednesday in Northern California prompted a feeling of resignation among residents and business owners and renewed rushes to stock up on emergency supplies.

“I think it’s not panic per se, just ‘Eh, we gotta do this AGAIN?’” said Kim Schefer, manager of Village True Value Hardware in Santa Rosa.

Schefer was busy Tuesday directing customers to gas cans and batteries as they prepared for what many see as a costly, frustrating new routine.

It would be the second blackout in two weeks for much of the state.

PG&E cut power to more than 2 million people across the San Francisco Bay Area in rolling blackouts from Oct. 9-12, paralyzing parts of the region in what was the largest deliberate blackout in state history. Schools and universities canceled classes and many businesses were forced to close.

PG&E gave 24-hour notice Tuesday to 189,000 customers, or roughly a half-million people, that it could begin a new round of precautionary shut-offs in 16 counties mostly in the Sierra foothills and north of the San Francisco Bay Area. The decision will be made Wednesday morning and the blackouts would begin Wednesday evening and last about 48 hours, the utility said.

Meanwhile Southern California Edison said it could cut power later in the week to about 132,000 customers in six counties

The utilities say it’s concerned that winds forecast to top 60 mph (97 kph) could throw branches and debris into power lines or topple them, sparking wildfires.

At Murphy’s Irish Pub in Sonoma, co-owner Dermot Coll groaned at the thought of another power outage. The watering hole kept its doors open during the last 48-hour shut-off, but it wasn’t easy because generator power to the walk-in coolers kept failing.

Coll said he fears that precautionary blackouts will become a regular occurrence now that fire season in California is a year-round phenomenon.

“It’s going to be an annual event, I’m afraid. I hate to say it, but I believe it’s probably true,” he said.

PG&E has cast the blackouts as a matter of public safety to prevent the kind of blazes that have killed scores of people in California over the past several years, destroyed thousands of homes, and ran up tens of billions of dollars in claims that drove the company into bankruptcy.

California Gov. Gavin sent a sharply worded letter Tuesday to Bill Johnson, CEO of the utility, blaming the unprecedented mass outage earlier this month on the company’s failure to maintain and upgrade its equipment.

“I believe the unacceptable scope and duration of the previous outage — deliberately forcing 735,000 customers to endure power outages — was the direct result of decades of PG&E prioritizing profit over public safety,” Newsom wrote, referring to the number of businesses and households affected, not the total number of people.

PG&E says the shutdowns are not about money.

The only goal “is to prevent a catastrophic wildfire,” Johnson said in a Tuesday briefing.

A huge portion of California is under high fire risk amid unpredictable gusts and soaring temperatures this week. PG&E forecasters are also keeping an eye on another possible wind event that could lead to preventative blackouts over the weekend into early next week, Johnson said.

In Sonoma, Coll said he dreads having to deal with another outage but said Murphy’s would likely stay open again.

“People were looking for somewhere to go,” he said. “One day sitting at home in the dark is tolerable, but by day two you’re itching to get out of the house.”

Customers used the opportunity to have a cold beer or two and complain about PG&E, he said.