WASHINGTON, May 10 (Xinhua) -- U.S. Secretary of State Antony Blinken on Monday urged all sides to de-escalate in Israeli-Palestinian clashes while recognizing Israel's right to self-defense in the face of rocket attacks. 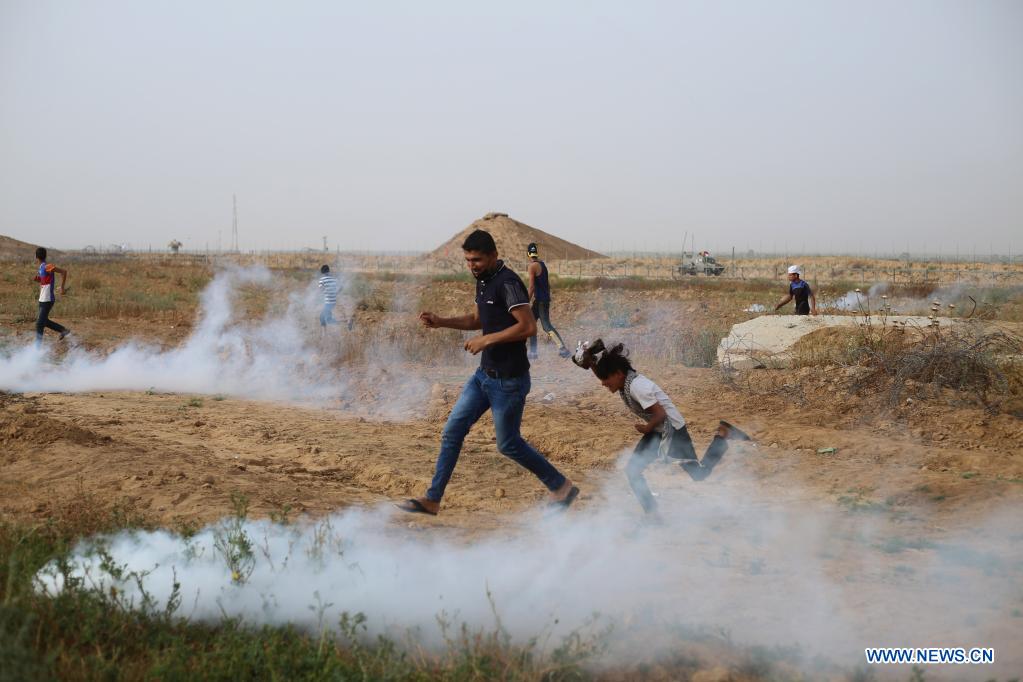 Palestinians run to take cover from tear gas canisters fired by Israeli troops during a protest against the violence in Jerusalem, on the Gaza-Israel border east of southern Gaza Strip city of Khan Younis, on May 9, 2021. (Photo: Xinhua)

"We're very focused on the situation in Israel, West Bank, Gaza, very deeply concerned about the rocket attacks ... that need to stop and need to stop immediately," Blinken said before his meeting with visiting Jordanian Foreign Minister Ayman Safadi.

He also expressed concerns about "the violence and provocative actions in and around the Haram al-Sharif/Temple Mount."

Blinken welcomed Israel's decision to reroute an annual nationalist flag parade and postpone a decision on the eviction of Palestinian families from the Sheikh Jarrah neighborhood in East Jerusalem.

"It's imperative that all sides take steps to de-escalate and calm the situation," he stressed.

The top U.S. diplomat also voiced deep concerns about rocket attacks against Israel, saying Israel has a right to defend its people and its territory from these attacks.

Safadi in his remarks highlighted that Jerusalem is a "red line" and maintaining peace and stability in Jerusalem is the key.

"Our focus right now is ensuring that the escalation stops ... we do believe that all immediate provocative measures against either the peoples of Sheikh Jarrah or in terms of violations into al-Haram must stop, status quo needs to be preserved, and the rights of the Palestinians need to be respected," he added.

After hundreds of Palestinians were injured in clashes with Israeli police in East Jerusalem on Monday morning, Hamas launched a rocket attack at Jerusalem in the afternoon, which drew a heavy Israeli response.

The tension between Israelis and Palestinians has been flaring up over the past few days amid the escalating violence in East Jerusalem between Palestinian demonstrators and Israeli forces.

Israel seized the West Bank, East Jerusalem, and Gaza Strip in the 1967 Middle East war. It annexed East Jerusalem shortly after the war, claiming it as part of the Israeli capital.