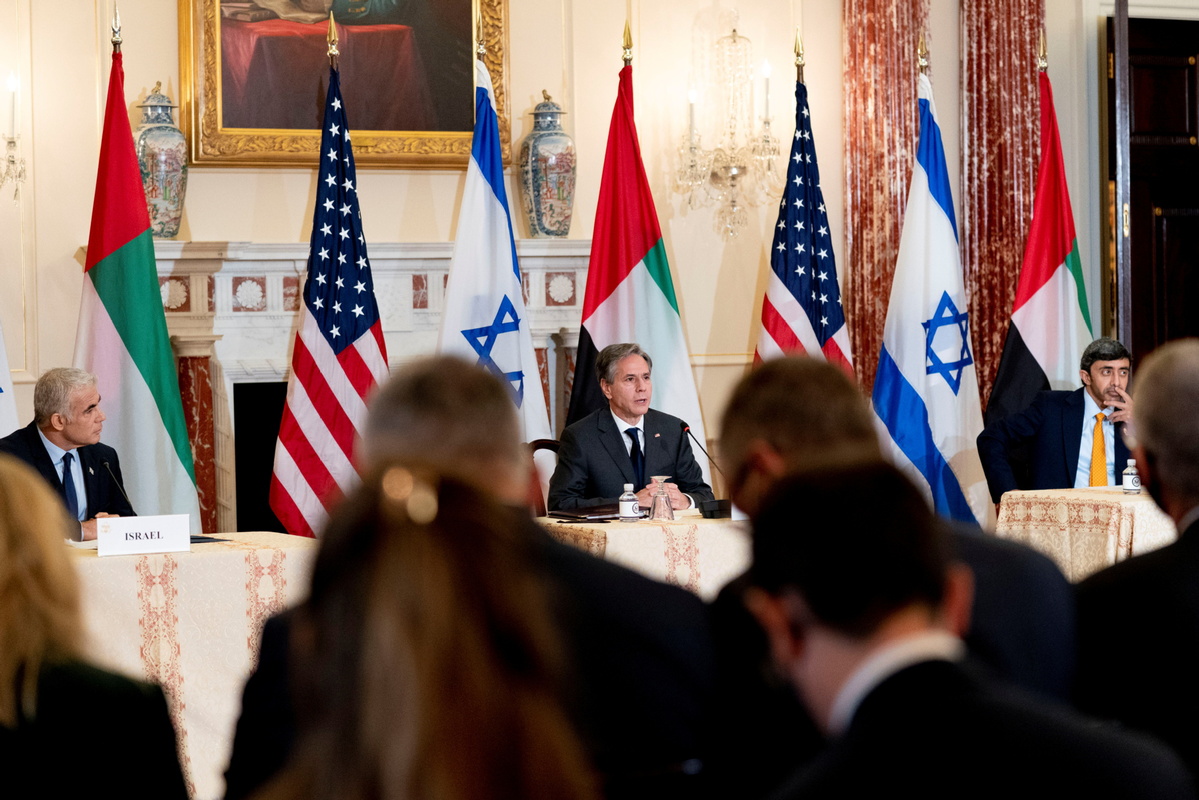 US Secretary of State Antony Blinken on Wednesday warned that the United States would turn to "other options" if diplomacy fails to curb Iran's nuclear program, saying "time is running short".

Blinken on Wednesday met with his counterparts of Israel and the United Arab Emirates (UAE) in the State Department over bilateral and trilateral cooperation as well as regional security issues, including Iran.

During a joint press conference after their trilateral meeting, Blinken reiterated that diplomacy is the most effective way to ensure that Iran would not develop a nuclear weapon.

"We are prepared to turn to other options if Iran doesn't change course," he said

The United States and Iranian officials began indirect talks in Vienna this April to restore the 2015 nuclear agreement, formally knowns as the Joint Comprehensive Plan of Action (JCPOA). The two sides still have significant differences after six rounds of negotiations, which have been suspended since June.

"I'm not going to put a specific date on it, but with every passing day and Iran's refusal to engage in good faith, the runway gets short," he said.

Israeli Foreign Minister Yair Lapid told reporters that the concern about Iran's nuclear capability was at the center of his visit. "Israel reserves the right to act at any given moment in any way" to stop Iran from acquiring a nuclear weapon, he said.

The former Donald Trump administration withdrew from the 2015 nuclear deal in May 2018 and unilaterally re-imposed old and new sanctions on Iran. In response, Iran has gradually stopped implementing parts of its commitments to the deal since May 2019.

Iranian Foreign Minister Hossein Amir Abdollahian said on Tuesday that Iran's actions "will be commensurate with the steps of other parties" in future talks aimed at reviving the nuclear deal.

The Wednesday meeting of the top diplomats came shortly after the first anniversary of the normalization between Israel and the UAE, which was brokered by the United States last summer.

The three countries are launching two trilateral working groups on religious coexistence and water and energy issues, according to Blinken.

He also reaffirmed that the Joe Biden administration supports a two-state solution between Israel and the Palestinians and will move forward with its plan to reopen a consulate in Jerusalem to deepen ties with the Palestinians, a move that the Israeli government opposed.