Blistered and hungry: Afghans walk hundreds of kilometres for peace 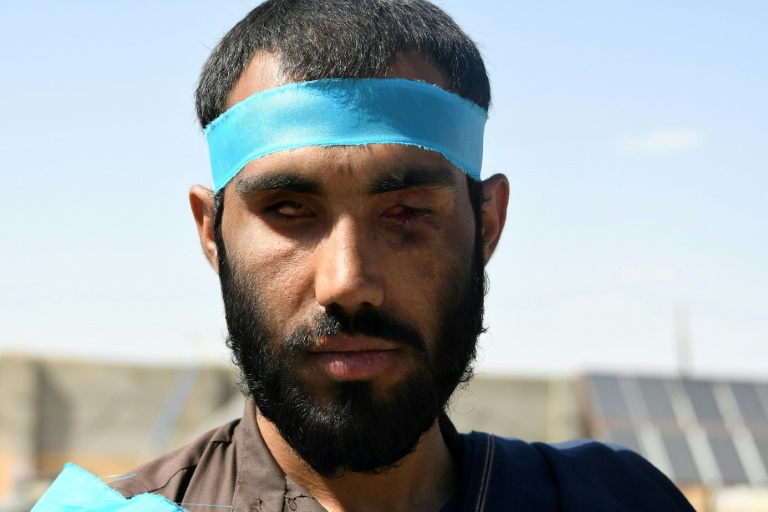 Among the protesters is Zaheer Ahmad Zindani, who was blinded in a roadside explosion several years ago that also killed his sister (Photo: AFP)

Hobbled by blisters and stalked by hunger, dozens of Afghan protesters are marching hundreds of kilometres across the war-torn country demanding an end to the nearly 17-year conflict.

Nine people began the weeks-long anti-war march in May, but their numbers have since swollen to around 50, organisers say, as their demands for an end to fighting gain traction among ordinary Afghans increasingly fed up with years of bloodshed.

The arduous journey began in the southern province of Helmand, a Taliban stronghold.

The group hopes to reach the capital Kabul, some 700 kilometres (430 miles) away, before the end of the holy month of Ramadan this week where it plans to present a list of demands for peace to Afghan leaders.

Among the protesters is Zaheer Ahmad Zindani, who was blinded in a roadside explosion several years ago that also killed his sister.

"We are tired of this war and bloodshed," Zindani told AFP as the group arrived in Ghazni, the capital of the southeastern province of the same name, over the weekend.

"Both sides should sit down for peace talks. We want a permanent and sustainable peace."

The group is also calling for a ceasefire -- but longer than the ones announced by the Afghan government and Taliban for the Eid holiday that follows Ramadan -- and a timetable for the withdrawal of foreign troops from Afghanistan.

After weeks of walking along asphalt roads in the heat, sleeping under trees or in mosques, and weakened by fasting for Ramadan, the group is now within 200 kilometres of the Afghan capital.

Initially ridiculed for their plan to walk to Kabul, the protesters now enjoy growing support as more Afghans pay attention to their cause and take to social media to cheer them on.

"Your every step gives us hope for peace, continue your march until we have peace," Jamilurahman wrote on Facebook.

A user called Hamidullah posted: "May Allah give you paradise for every step you take for peace. May peace prevail in every part of our country."

The march, which is believed to be the first of its kind in Afghanistan, emerged out of a sit-in protest and hunger strike in the Helmand provincial capital Lashkar Gah.

That demonstration, which began spontaneously after a car bomb attack in the city on March 23, triggered similar movements by war-weary Afghans around the country.

But when the Taliban and security forces failed to heed their demands to stop fighting, some of the protesters decided to take their message directly to the country's top leaders.

It has been a physically gruelling and dangerous journey as the Taliban and Islamic State group step up attacks against Afghan and foreign forces.

Every day the protesters run the gauntlet of roadside bombs, armed robbers and militants.

But they accept the risks.

"There is no safe place left here," Sardar Mohammad Sarwari, who uses crutches to walk after polio weakened his legs, told AFP.

"I can be killed if I stay home or if I go to my shop, so I have decided it is much better to die for peace so the next generation of my family can enjoy peace."

Abdullah Malik Hamdard told AFP he felt that he had nothing to lose by joining the march.

"Everybody thinks they will be killed soon," he said.

"The situation for those alive is miserable. If you don't die in the war, the poverty caused by the war may kill you, which is why I think the only option left for me is to join the peace convoy."

The protesters, wearing matching blue bandanas and sashes with the message "We want peace", have received help from ordinary Afghans along the way.

They are provided with food and drink for their pre-dawn and post-sunset meals, but during the day they battle hunger and fatigue.

Drivers honk their horns in support and some stop to praise them.

Even Afghan security forces and Taliban fighters have taken a break from the battlefield to urge them on, Iqbal Khaibar, one of the leaders of the group, told AFP.

Zindani, who was blinded several years ago by pieces of flying glass after a roadside bomb struck the bus he and his sister were travelling in, holds a fellow protester's hand for guidance as he walks.

"All the marchers have suffered in this war," he said, noting that his own sister, father and uncle had been killed in the conflict.

"One lost a father, another lost a brother, sister, mother -- everyone has lost loved ones.

"My only wish and demand is stop this war and fighting."