WORLD Bloomberg : 3 women can be released on non-disclosure deals

Bloomberg : 3 women can be released on non-disclosure deals 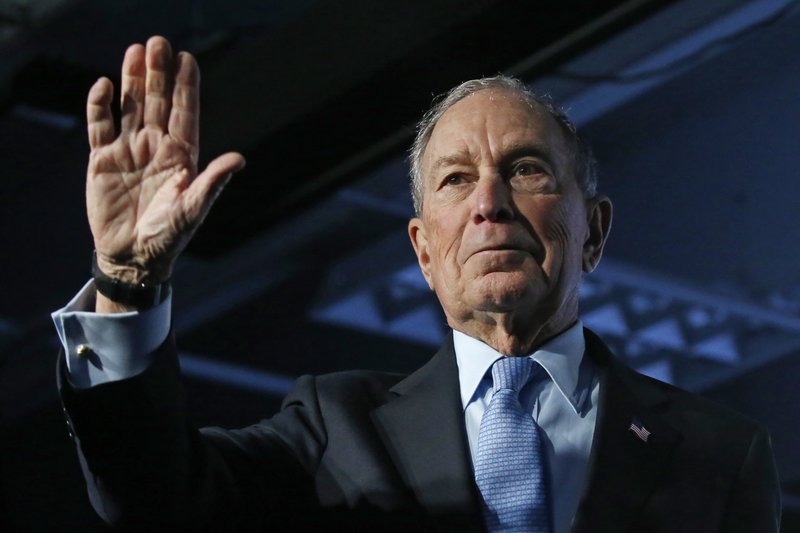 Mike Bloomberg said Friday he’d free three women from confidentiality agreements that bar them from speaking publicly about sexual harassment or discrimination suits filed against him over the last three decades.

The billionaire former mayor of New York also said his company, Bloomberg LP, will no longer use such agreements “to resolve claims of sexual harassment or misconduct going forward.”

His remarks come after days of intense scrutiny over the treatment of women at the company he’s led for three decades, and amid pressure from Democratic presidential rival Elizabeth Warren to allow the women to share their claims publicly. Warren hammered Bloomberg over the issue in the recent debate, his first time facing his rivals. The announcement Friday highlights his efforts to remove a vulnerability ahead of the next debate, on Tuesday in South Carolina, and refocus his campaign ahead of March 3, known as Super Tuesday, when he will be on the ballot for for the first time.

Bloomberg didn’t automatically revoke the agreements, but told the women to contact the company if they would like to be released. The three agreements he’s willing to open up relate specifically to comments he’s alleged to have made. His company reportedly faced nearly 40 lawsuits involving 65 plaintiffs between 1996 and 2016, though it’s unclear how many relate to sexual harassment or discrimination.

Bloomberg said in a statement he’d done “a lot of reflecting on this issue over the past few days.”

“I recognize that NDAs, particularly when they are used in the context of sexual harassment and sexual assault, promote a culture of silence in the workplace and contribute to a culture of women not feeling safe or supported,” it continued.

But his move only prompted more criticism from his rivals.

“That’s just not good enough,” Warren said while campaigning Friday in Las Vegas, a day before the Nevada caucuses. “If there are only three, then why didn’t he sign a blanket release?”

“If Mayor Bloomberg wanted to release all current and former Bloomberg LP employees from NDAs, he surely could have done so — and he still can and should,” Biden’s deputy campaign manager, Kate Bedingfield, said in the statement.Bloomberg’s Friday statements mark a stark departure from his remarks about the agreements in this weeks debate. He called the agreements“consensual” and said women who complained “didn’t like a joke I told.” The remarks were viewed by some as out-of-touch with the post-#MeToo era, which has prompted far more serious scrutiny of sexual harassment and innuendo by men in the workplace. Bloomberg is one of the country’s richest men, worth an estimated $60 billion.

It was the first time Bloomberg was truly put on the spot in an otherwise choreographed campaign, where he’s been promoting his message via television advertising and scripted speeches rather than debates and town halls with voters.

One of the women covered by Bloomberg’s announcement is Sekiko Sekai Garrison, 55, who filed a complaint against Bloomberg and his company in 1995. She did not respond to a phone message seeking comment on Friday.

Garrison’s complaint, reviewed by the Associated Press, was filed when she was about 30 and alleged Bloomberg told her to “kill it” when she told him she was pregnant with her first child. The lawsuit details several other alleged personal interactions with Bloomberg and describes a misogynistic corporate culture where women were typically paid less than men, subject to routine sexual harassment and demoted or fired if they complained.

In the alleged incident, Garrison said Bloomberg approached her near the office coffee machines and asked about her married life. When she told him she was pregnant with her first child, he said “kill it,” in a serious monotone. He allegedly then repeated it and called her “number 16,” a reference to the number of pregnant women employees.

Bloomberg has denied making the remarks. But Garrison said he left her a voicemail apologizing and calling the remark a joke. She resigned from the company.

Lawyer Bonnie P. Josephs, who filed the 1995 complaint on Garrison’s behalf, told AP on Thursday that she later handed the case off to another attorney. Josephs said she was then told that Garrison had settled the case against Bloomberg for a “six-figure sum” and signed a nondisclosure agreement.

A longtime Bloomberg aide confirmed that case was one of the three agreements Bloomberg mentioned in his statement, in which an NDA was signed that directly related to Bloomberg. The other two cases never went to court and are not public.

Bloomberg also said his company would undertake a review of its policies on equal pay and promotion, sexual harassment and discrimination and the use of “other legal tools” that prevent cultural change. He also pledged to push policies if elected president that expand access to childcare and reproductive health and guarantee 12 weeks of paid leave.

“I will be a leader whom women can trust,” he said.