Bloomberg at UN: US president must end fossil fuel subsidies 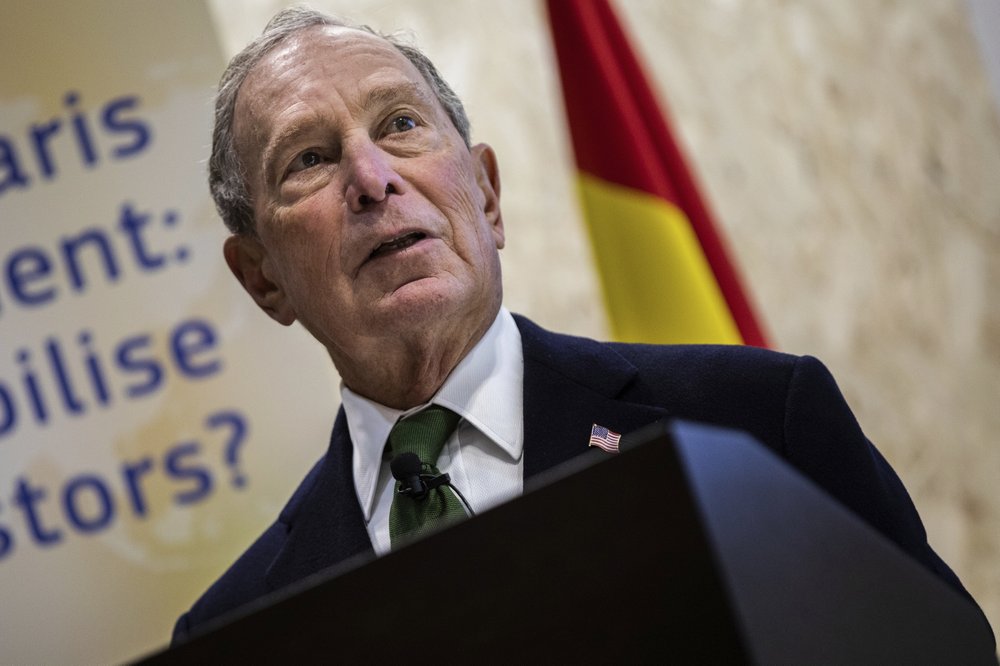 The next US president should stop subsidizing fossil fuels to help tackle climate change, billionaire Michael Bloomberg said Tuesday, highlighting an issue that is the central pillar of his bid for the Democratic nomination in the 2020 presidential race.

Bloomberg, who launched his presidential campaign less than three weeks ago, spoke during a whirlwind trip to the United Nations global climate conference in Madrid.

By taking aim at fossil fuel subsidies, Bloomberg is challenging both a powerful American industry and Republican President Donald Trump, who has championed the extraction of oil, gas, and coal.

Fossil fuels such as oil, gas, and coal are one of the main sources of greenhouse gas emissions warming the planet. Scientists say their use needs to end by the middle of the century if average temperatures on Earth are to rise no more than 1.5 degrees Celsius (2.7 degrees Fahrenheit) by 2100, the target set in the Paris climate accord four years ago.

“The next president of the United States should end all subsidies for fossil fuel companies and fossil fuel extraction, and that includes tax breaks and other special treatment,” Bloomberg said during an event on sustainable finances organized by the conference host, Spain.

“He or she should reinvest that funding into clean energy, which will also create a lot of new jobs,” Bloomberg added.

According to a report by the International Monetary Fund, effective fossil fuel subsidies in the United States amounted to $649 billion in 2015. Only China spent more tax money — $1.4 trillion — to keep fossil fuel prices low that year.

The IMF report calculated that if prices reflected the true costs of fossil fuels, including the environmental damage they cause, consumption would have dropped so much that global carbon emissions would be 28% lower.

Discussing measures to curb emissions, such as an end to fossil fuel subsidies, is one of the reasons that officials from nearly 200 countries meet each year at the climate summit. Bloomberg has been a regular visitor to these talks but his attendance this year stands out because of his presidential ambitions.

The 77-year-old businessman and former New York mayor has helped support and fund a private push to organize US states, cities and businesses to abide by the terms of the 2015 Paris accord, a treaty the Trump administration is working to abandon.

“Americans are willing to continue to work even with a climate change denier in the White House,” Bloomberg told a packed audience in Madrid.

“The White House matters, but sometimes not too much,” he added.

Bloomberg, like other Democratic hopefuls, has vowed to rejoin the Paris accord if he’s elected president next year. The US remains a party to the climate pact until Nov. 4, 2020 — the day after the US presidential vote.

The Trump administration has sent a low-level delegation to the talks, led by a career diplomat, Ambassador Marcia Bernicat.

John Kerry, the former Secretary of State under the last Democratic administration, is also attending events on the sidelines of the Madrid climate conference. He said the absence of any representative from the White House at the talks “speaks for itself.”

“It’s an absence of leadership,” Kerry told The Associated Press. “It’s a tragedy.”

The talks in Madrid shifted into higher gear Tuesday as ministers arrived to tackle some of the thorny political issues still remaining, including finalizing the rules for international carbon markets — which economists say could help drive down emissions — and getting help for poor countries to cope with the effects of rising temperatures.

Despite growing awareness of climate change and warnings from scientists that drastic action needs to be taken to avert extreme temperature increases by the end of the century, only a handful of countries will be represented at the UN climate summit this year by their prime ministers or presidents, worrying some observers.

“It shows that there has not yet been an internalization of the emergency situation that we are in, that so few heads of state are coming to Madrid and ready to roll up their sleeves and do what it takes to actually respond to the science,” said Jennifer Morgan, executive director of Greenpeace International.

She also accused some governments, such as Brazil and Saudi Arabia, of trying to weaken the agreements, and called on the European Union to work with vulnerable nations to counter those efforts.

Environmental activists are hoping the EU will present an ambitious plan this week to cut emissions in the medium- and long-term that would send a message of hope to weary negotiators in Madrid.

The new head of the EU’s executive Commission, Ursula von der Leyen, has backed a call for the bloc to stop all net emissions of greenhouse gases by 2050.

Climate change has become a growing political issue in Europe, especially for the young, over the past year. The region has seen rising support for environmental parties, driven in part by young people staging regular mass protests in favor of faster actions to combat climate change.

Two of the youth movement’s most prominent figures, Swedish teenager Greta Thunberg and Luisa Neubauer of Germany, used their platform at the UN talks to champion the scientific understanding of climate change.

“As it is now, people are not fully aware of what is going on,” Thunberg said.

Her comments were later echoed by Bloomberg, who recently stepped down as the UN’s climate envoy.

“There’s new evidence every day that the climate crisis is only getting worse and that should redouble our efforts,” he said. “Our children’s future really is at stake. We have an obligation to act now.