WORLD Bloomberg creates a parallel presidential race. Can he win?

Bloomberg creates a parallel presidential race. Can he win? 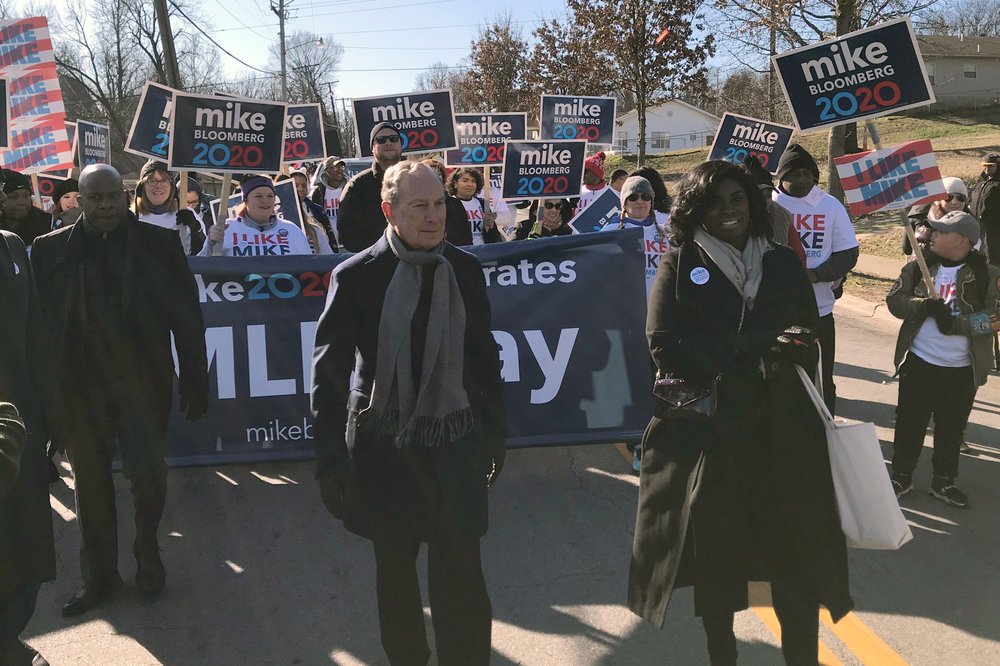 The former New York mayor was instead in Arkansas, tossing out candy at a King Day parade and enjoying his status as the only presidential hopeful in town.

“Mike Boomerang?” a woman asked, as the billionaire businessman walked by.

Bloomberg is running, but he’s on his own track, essentially creating a parallel race to the nomination with no precedent. While his competitors are hunkered down in the four states with the earliest primaries, Bloomberg is almost everywhere else — a Minnesota farm, a Utah co-working space, an office opening in Maine. He’s staked his hopes on states like Texas, California, and Arkansas that vote on March 3, aiming to disrupt the Democratic primary right around the time it’s typically settling on a front-runner. Or, should Vermont Sen. Bernie Sanders, a self-described democratic socialist, be that front-runner, Bloomberg could be a backstop to Democrats still looking for a moderate choice.

Skipping the early voting states and banking on success in later delegate-rich contests has never been done successfully. But no candidate has ever brought the financial firepower that Bloomberg can — he is worth an estimated $60 billion and has already spent more than $200 million building a campaign in more than two dozen states, taking him well past Super Tuesday.

“Every other campaign thinks about this as a sequential set of contests. They spend time in Iowa and New Hampshire ... hoping that they’ll (get a) momentum bounce from one to the next,” said Dan Kanninen, Bloomberg’s state director. “We’re thinking about this as a national conversation.”

But interviews with voters and party officials across the Super Tuesday states show Bloomberg is still just starting to make an impression. While officials marveled at the inescapable ambition of Bloomberg’s advertising, many voters still do not know who he is or know only what they’ve seen on television. Others noted they were interested but were still waiting to see who emerged as a clear leader in earlier contests.

“I’ve been trying to read up on him to figure out if he’s going to be my key player,” said Cassandra Barbee, a hotel worker who watched Bloomberg in the Arkansas parade. She said his ads about helping people access health care appeal to her.

Bloomberg isn’t the sole candidate campaigning beyond the first four states. Elizabeth Warren’s campaign said it has more than 1,000 staffers, the same number Bloomberg has been touting, across 31 states. All the major campaigns have operations in California, the biggest delegate prize, and several are up and running in states like Texas and North Carolina.

But no candidate’s reach matches Bloomberg’s. He had spent more than $225 million on television and digital advertisements as of mid-January, according to the tracking firm Advertising Analytics, and he’s run television ads in at least 27 states. That’s 10 times what each of the other leading candidates has spent, according to the firm’s tracking.

Bloomberg has already campaigned in every Super Tuesday state, in addition to states like Florida, Michigan, and Ohio, which vote later but are major general election battleground states where Bloomberg thinks his message will resonate. Meanwhile, his campaign pushes out a steady stream of endorsements, policy plans, and ads that keep him in the headlines as Iowa’s caucuses near.

“He’s definitely piquing my interest,” said Erica Moore, a guidance counselor at Little Rock schools. Moore said she’s aware of Bloomberg because his ads air constantly but said she wasn’t sure whether she’d vote for him.

How exactly Bloomberg plans to win enough delegates to capture the nomination is unclear. The campaign acknowledges public polls show he hasn’t hit the 15% threshold he will need to win delegates, which are awarded proportionally statewide and by congressional district. Kanninen would not set hard targets for what success looks like on Super Tuesday when a third of all delegates are awarded. Bloomberg needs to win some delegates, Kanninen said, but regardless of performance, “we’re prepared to move on and compete vigorously.”

But winning a share of delegates isn’t enough, said Democratic strategist Bill Carrick, who argued that Bloomberg needs to win several Super Tuesday states to be credible. And Bloomberg’s anti-Trump advertising may not move voters his way in the primary, Carrick said.

“I think that people are going to separate out whether they want him to have a robust effort in the general election taking on Trump versus him being the candidate,” he said.

The best boost to Bloomberg’s chances may be what happens in the weeks leading up to Super Tuesday. As national and early-state polls show Sanders in a strong position, Bloomberg could emerge as a moderate alternative should former Vice President Joe Biden or other candidates look weak. While Bloomberg has said he would support Sanders if he were the nominee, the two differ sharply on the policy.

Winning the primary isn’t Bloomberg’s only aim. He hopes his ads and organizing soften the ground for whomever Democrats pick to challenge Trump and help Democrats in down-ticket races. Bloomberg has committed to continue to spend millions — keeping offices and organizers in battleground states — regardless of whether he is the nominee.

One of those states is North Carolina, where the campaign announced this week it had more than 100 paid employees. That’s a staffing benchmark more typical for a general election campaign. Hardly a local newscast or game show passes by in a major TV market that a Bloomberg commercial isn’t airing.

Those ads tout his record on issues like health care and gun control and attack Trump, branding him a “dangerous demagogue” and calling for his removal from office. “Mike will get it done” is the former mayor’s slogan.

A former Republican and a businessman, Bloomberg believes he’ll appeal to moderates and conservatives frustrated with the president. But he has clear competition on that argument from both Biden and Buttigieg.

Judy Eason McIntyre, 74, who attended a Bloomberg speech last week in Tulsa, Oklahoma, thinks he would match up well against Trump, but that’s not enough to win her vote.

“I’m one of those older black folks that are going to stick with Biden,” said McIntyre, a former state senator, and longtime Democratic Party activist. “But out of the candidates I see, being practical, he and Michael Bloomberg are the ones who could beat Trump, and that’s what I’m after.”

Bloomberg’s campaign says it’s not focused on comparison with other Democrats.

Bloomberg recently brought his anti-Trump message to Utah, where Democratic presidential primary ads are “relatively unheard of,” said Jeff Merchant, chair of the Utah Democratic Party. Speaking in Salt Lake City last week, Bloomberg appealed to left-leaning voters who feel overlooked in a state that hasn’t supported a Democrat for president since 1964.

“We shouldn’t be writing off any state no matter how red people think it is,” Bloomberg said while speaking at a modern co-working space.

In some Super Tuesday states, Bloomberg is coming with a history that won’t necessarily help him court moderates and disaffected Republicans. In Virginia, which offers the third-most Super Tuesday delegates, he helped Democrats win full control of the state legislature for the first time in a generation last year through spending by his gun control group, Everytown for Gun Safety.

Democrats are now set to pass a slate of gun control measures, prompting the National Rifle Association to put Bloomberg’s face on a billboard. Such notoriety could serve to bolster his credentials with Democrats but turn off voters in gun-friendly southern states.

Perhaps the biggest question of Bloomberg’s candidacy is whether an ad blitz is enough to win over primary voters. In California, Republican businesswoman Meg Whitman lost statewide in 2010 after spending nearly $100 million, losing to the better-known Democrat Jerry Brown.

And in Texas, it wasn’t a barrage of TV ads that laid the groundwork for Democrat Beto O’Rourke to nearly win a Senate seat in 2018. It was his up-close-and-personal campaign that took him to every single county that captured voters’ attention.

So far, no major Texas officials have backed Bloomberg, even after he finished a five-city bus tour through the state earlier this month.

But Garry Mauro, who was the Texas chairman for both Clintons’ presidential campaigns, sees Bloomberg’s strategy as sensible. Mauro, who supports Biden, says no candidate but Bloomberg has the money to saturate Texas’ many television markets, and there’s no guarantee that a clear front-runner will emerge before Super Tuesday.

“He’s betting on nobody’s getting the momentum, and he can get his own momentum on TV,” he said. “That’s a totally different approach than what we’ve ever seen before.”