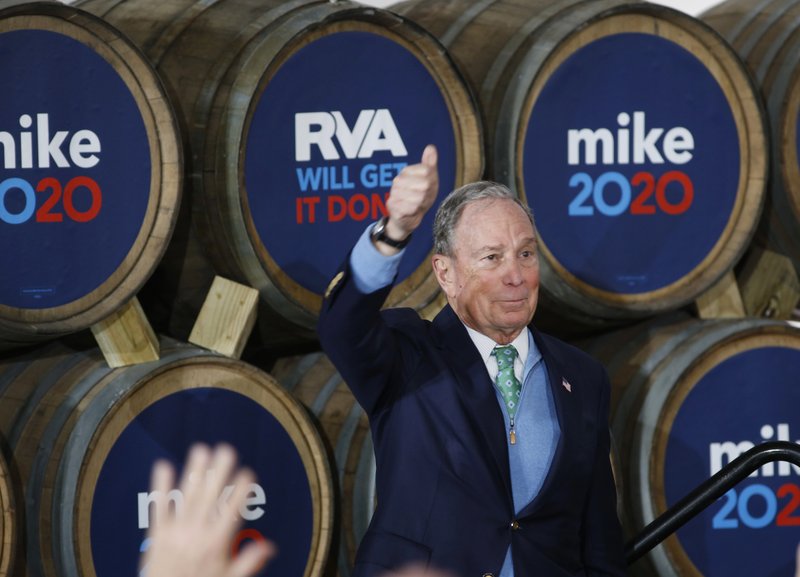 Billionaire Mike Bloomberg has qualified for the upcoming US democratic presidential debate, marking the first time he’ll stand alongside the rivals he has so far avoided by bypassing the early voting states and using his personal fortune to define himself through television ads.

Bloomberg's campaign said that it was seeing “a groundswell of support across the country” and that qualifying for Wednesday's debate “is the latest sign that Mike's plan and ability to defeat Donald Trump is resonating with more Americans.”

“Mike is looking forward to joining the other Democratic candidates on stage and making the case for why he's the best candidate to defeat Donald Trump and unite the country,” Bloomberg campaign manager Kevin Sheekey said in a statement.

The Democratic National Committee recently changed its rules for how a candidate qualifies for the debate, opening the door for Bloomberg to be on stage and drawing the ire of some candidates who dropped out of the race for failing to make prior stages. The candidates were previously required to receive a certain number of campaign contributions to qualify, but Bloomberg, who is worth an estimated $60 billion, is not taking donations.

The prime-time event will be a stark departure from Bloomberg's highly choreographed campaign. He’s poured more than $300 million into television advertising, a way to define himself for voters without facing criticism. While he’s campaigned in more than two dozen states, he does not take questions from voters and delivers a standard stump speech that lasts less than 15 minutes, often reading from a teleprompter.

He encounters the occasional protester, including one who jumped on stage recently in Chattanooga, Tennessee, yelling, “This is not democracy. This is a plutocracy!” But his friendly crowds usually quickly overwhelm the protesters with chants of “We like Mike!”

Bloomberg is likely to face far more direct fire in the debate. His fellow Democratic contenders have stepped up their attacks against him in recent days, decrying him for trying to “buy the election” and criticizing his support of the “stop-and-frisk” tactic while mayor of New York City that led police to target mostly black and Hispanic men for searches.

Bloomberg has barely crossed paths on the trail with his fellow Democrats. He decided to skip the first four voting states of Iowa, New Hampshire, Nevada and South Carolina in favor of focusing on the 14 states that vote on March 3 and the contests that come afterward.

He rarely mentions his rivals by name, though his campaign is centered on the idea that none of them can beat President Donald Trump. And Bloomberg, more than anyone, has predicated his campaign on a potential Biden collapse. He's been aggressive in targeting African American voters in the South, a core demographic for Biden's campaign.

Biden said he doesn't think “you can buy an election.”

“I'm going to get a chance to debate him on everything from redlining to stop and frisk to a whole range of other things,” Biden told reporters last week.

The poll released Tuesday shows Sanders leading in the Democratic primary contest, at 31% support nationally. After Bloomberg at 19%, Biden is at 15%, Warren at 12%, Klobuchar at 9% and Buttigieg at 8%. Steyer is at 2%, and Rep. Tulsi Gabbard is at less than 1%, with 5% undecided.

The telephone survey of 527 Democrats and Democratic-leaning independents was conducted by the Marist Poll at the Marist Institute for Public Opinion. It has a margin of error of plus or minus 5.4 percentage points.