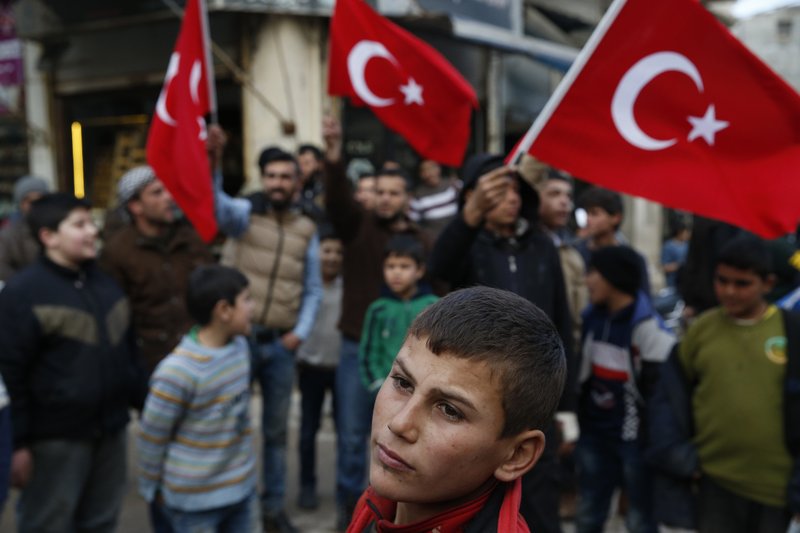 A newly paved road links the Turkish town of Elbeyli to the Syrian town of al-Bab, across the border. In al-Bab, Turkish and Syrian flags line the streets, and signs on government buildings are in Arabic and Turkish. One of the first billboards honors Turkish soldiers killed in the battle to liberate this town from Islamic State militants.

Al-Bab, still scarred by war, is busy with construction. A large Turkish-funded hospital is nearly complete. A huge tree-encircled plot on the main highway will be the town’s first industrial zone. A census and registration of land deeds are underway.

Overseeing the beehive is a veteran Turkish provincial official, Senol Esmer, deputy governor of the Turkish city of Gaziantep, sent here to direct al-Bab’s development. His office is in the local police station which swarms with Turkish security alongside construction workers building an extension.

The main reason for Turkey’s support “is humanity,” Esmer said. “We call it ‘justice of fraternity’ because we have been living together with these people for 600 years, since Ottoman times. And after that, as neighbors,” he said, referring to Syria’s longtime place in the Ottoman Empire, which fell with World War I.

Turkey is growing long-term roots in its northern Syrian enclave, nearly two years after its troops moved in, modeling the zone on its own towns and bringing in its own administrators and military, financial and security institutions.

Turkey now holds sway over more than 4,000 square kilometers (1,500 square miles) of Syrian territory. Almost a quarter of Syria’s population is under Turkish control indirectly or directly — including 3.6 million refugees in Turkey, around 600,000 people living in the enclave, most of them displaced from elsewhere in Syria, and the 2 million people in Idlib, the last remaining rebel-held province, where Turkey has gained a major say.

But there are strategic goals behind its deepening hold. Fundamentally, Turkey aims to keep out its nemesis, the US-backed Syrian Kurdish militia known as the YPG.

Also, Turkey, presenting itself as the protector of the Syrian opposition, is now positioned to be the main negotiator along with Russia over shaping Syria’s future. Moscow may be open for that: It gave a green-light for Ankara’s move into Syria. Turkey hopes its weight will lure Washington away from the alliance with the Kurds to rely on it as a bulwark against Iranian influence in Syria.

The Turkish intervention is the “most important development” in the Syrian conflict since Russia threw its military might behind President Bashar Assad in 2015, said Nicholas Heras, of the Washington-based Center for New American Security.

Having troops on the ground and controlling large parts of the Syrian population “definitely means no solution is possible without Turkish cooperation,” said Heiko Wimmen, project director for Iraq, Syria and Lebanon with the International Crisis Group.

The zone is the latest phase in the evolution of Turkey’s aims in Syria’s war. At first, it joined a Western and regional alliance funding and arming rebels with the aim of ousting Assad. Then it said it needed to protect its own security, fearing the growing clout of the Kurdish militia. Ankara considers the YPG a front for its own domestic Kurdish insurgency. The United States allied with the militia to fight the Islamic State group, and it now holds nearly 25 percent of Syria, including much of the border with Turkey and Syria’s richest oil fields.

In the summer of 2016, Turkey launched its military incursion alongside allied Syrian fighters to drive out both the Islamic State group and the YPG.

It took more than three months of fighting for the Turkish-led forces to take al-Bab district, killing more than 70 Turkish soldiers. But the battle cemented the working relationship with Moscow: For the first time, the Russian air force backed Turkish forces advancing on the town. Al-Bab’s strategic location allowed Turkey earlier this year to uproot the YPG from its westernmost stronghold Afrin, thwarting a contiguous Kurdish entity along the border. That secured Turkey’s hold on northwest Syria, but also brought it close to Syrian government forces.

Now Ankara is installing a Turkish-European style government in what it calls the Euphrates Shield area.

Esmer, the Turkish official, oversaw the formation of a 21-member governing body in al-Bab, which employs nearly 150 staff, most paid by Turkey. He estimated the council will collect some $1.7 million in revenues from rents, taxes and municipal fees in 2018.

“We provide the flour, but they (Syrians) process it to make bread. With a small profit, they organize the distribution,” Esmer said.

Most Turkish spending goes to health and education. Thousands of teachers are paid by Turkey. Schools are being rehabilitated and new ones are coming up. A new $17-million hospital financed by the Turkish Health Ministry opens this month in al-Bab. A Turkish university plans a branch in the town, and others held tests here for Syrian students wanting to enroll in Turkey.

Turkey has moved its troops out of towns, positioning them mostly on nearby hills. In al-Bab, it trained some 2,000 Syrian security, including 100 women, to police checkpoints in al-Bab.

Ahmed Hussein Taher, a school principal in Jarablus, said that means the 1,300 teachers in the town get salaries far more quickly and efficiently. Taher was promoted to principal by the Turkish-backed administration, a post he said he never would have had under Assad since he wasn’t a ruling party loyalist.

“We teach Turkish language classes to first and second graders. Hopefully in the coming years we’ll offer it to all grades,” he said. “Turkish language is a must. Our Turkish brothers have given us everything and we work with them.”

In al-Bab, engineer Zakaria Haj Hassan ordered pipes from Turkey to install in a new industrial zone that he hopes will attract Syrian investors, both here and in Turkey.

Dependency on Turkey, he said, is natural and historic.

“I remember our grandparents singing: ‘from Aleppo to Antep’,” he said, using the old Ottoman name for Gaziantep. “We still have relatives in Turkey.”

A big test for Turkey is keeping security.

Thousands of Syrian fighters worked with the Turkish military to liberate these areas. Thousands more flooded in since then as the Syrian government seized rebel-held areas elsewhere. Turkish officials estimate that now up to 60,000 Syrian gunmen operate in the Turkish zone, with nowhere else to go and no other supporter but Turkey.

Bloody clashes have frequently broken out among them, mostly triggered by lack of resources, competing leadership and disputes between locals and newly arrived fighters.

One battle erupted in al-Bab when a gunman claimed an empty lot of land, claiming it had been IS property, and the local owner protested, prompting clashes with heavy machine guns. The newly-trained local security didn’t interfere. Days later, a gunman beat a nurse in a hospital, setting off fighting that ended when his commander offered to hand him over.

There have also been reports of radicalism among the militias, with some seeking to impose strict Islamic dress on women and others seizing and looting homes of Kurdish residents.

A senior Turkish official blamed the Syrian government, saying it seeks to “destabilize” the Turkish zone by flooding the area with the thousands of gunmen transferred from other areas.

“But we are not going to let that happen. It is part of our military planning,” the official said, speaking on condition of anonymity in line with government regulations. Turkey’s objective is “to get Syria back on its feet. If there is a power vacuum and social structures are weakened, it will end up back where it was.”

The challenge is greater in neighboring Idlib, where a “witch’s brew” of more extremist organizations, including al-Qaida, are in control, said Heras. Turkey, in agreement with Russia, has set up observation posts around Idlib, protecting the area as it seeks to remodel rebels there into a more moderate force. But those posts also bring it into potential friction with Syrian troops.

Mohammed ElSheikh, 25, a humanitarian worker in al-Bab, said he expects Turkey’s control of northern Syria to last for a decade. He said Turkey is serving “the Syrian revolution” and that it and Moscow will work out a new system that keeps Syria together but doesn’t include Assad.

But ElSheikh said Turkish control can be heavy-handed as well. He said it took him months to wade through Turkish bureaucracy and security checks for approval of his organization, which supports school drop-outs.

Turks, he said, “must help Syrians, not rule them. Right now, they are ruling.”

This story has been corrected to say that the Turkish town directly across the border from al-Bab is Elbeyli, not Cobanbey. Cobanbey is the Turkish name for the Syrian border town of al-Rai, north of al-Bab.