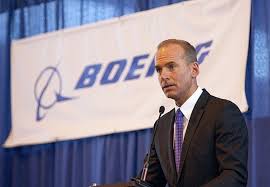 WASHINGTON (People’s Daily) — While Trump has said trade wars are "good and easy to win," the Chicago-based company Boeing are standing in the crossfire of retaliatory measures between US and China.

Boeing CEO and Chairman, Dennis Muilenburg, recently warned that an escalating trade dispute could have a serious impact on the aviation giant.

Speaking at this year’s Farnborough Air Show on Monday, he pointed out that finding a solution would be essential as the aerospace industry relies on the free flow of goods.

“All of the fabric of our global relationships is important to our business,” the CEO said during a media event prior to the airshow stressing that aerospace thrives on a global free and open trade business model.

Although the Muilenburg insisted Boeing has not yet had “a material effect” on business, one aviation industry source close to the company said that its executives are meeting regularly with high-ranking White House administration officials.

According to the Financial Times, Muilenburg said, “Our voice is being heard. We are engaged with the US government and with the Chinese government. I’m hopeful we’ll come to a good resolution.”

The US has slapped tariffs on $34 billion of Chinese goods, with China responding in equal measure. The Trump administration is planning more tariffs on Chinese imports totaling some.

Boeing wants nothing to do with Trump’s trade war with China, yet aviation experts say US companies like Boeing will take the first hit because most US aerospace manufacturing is generated by foreign demand.

Boeing, which describes itself as "the top US exporter," reported revenue of $93.4 billion last year. It employs more than 140,000 in the US and in 65 foreign nations.

The company’s upbeat sales forecast the underlining importance of China’s relationship with the aircraft industry.

So far, Beijing has not targeted Boeing. Nevertheless, aviation industry analysts are keeping an eye on how the trade war could influence China.

Cai von Rumohr, an analyst with Cowen and Co., warned that if the dispute continues and affects the broader global economy, this could “impact airline passenger and freight traffic, ultimately restraining demand for aircraft,” the Financial Times also reported.