The pilots of two Boeing 737 MAX jets that crashed and killed all 346 people on board may have been overwhelmed by "an already high workload environment" amid multiple cockpit warnings and may not have followed established procedures to regain control of the aircraft, Boeing's CEO believes. 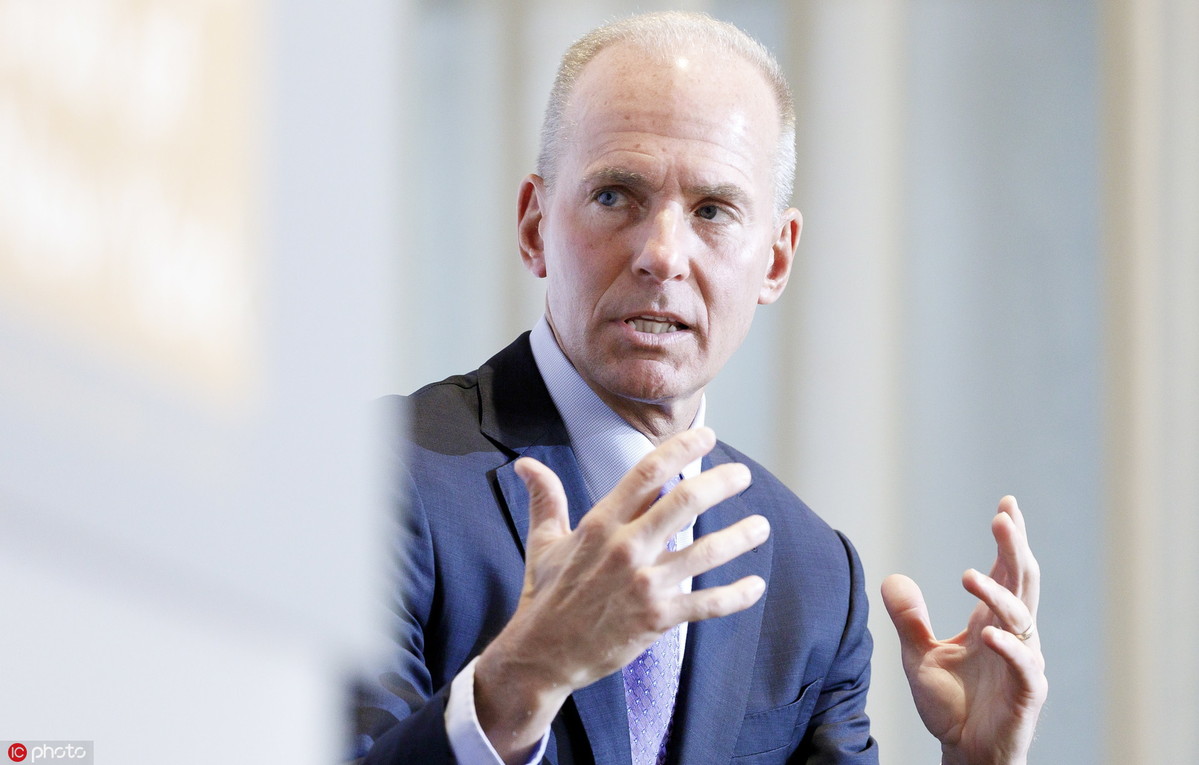 Dennis Muilenburg, the CEO of The Boeing Company, speaks at an event with the Economic Club of New York in New York, New York, USA, 02 October 2019. (Photo: IC)

Speaking at The Economic Club of New York, CEO Dennis Muilenburg said Wednesday that investigations of the crashes aren't yet complete and therefore all findings are preliminary.

"The early information established that in both flights, a software function activated in response to incorrect information from an external airplane sensor as part of a broader chain of events that created more workload for the pilots in what was already a high workload environment," he said.

The aircraft flight recorder, known as the "black box", recovered after the crashes showed that multiple alarms activated prior to the accidents, including the "stick-shaker" that vibrated the pilots' control column, audible "don't sink" warnings that the planes were too close to the ground, and a "clacker" producing loud clicking to indicate the jets flew too fast, as well as multiple warning lights alerting the pilots to dangerous speed and altitude.

Investigators believe data fed to the Maneuvering Characteristics Augmentation System (MCAS) automated anti-stall device appeared to be erroneous and repeatedly pointed the nose of the aircraft down to gain speed and avoid a mid-air stall, adding to the apparent chaos in the cockpit. Boeing hasn't yet submitted updated MCAS software to regulators for review.

Testifying before Congress in June, Chesley "Sully" Sullenberger, the commercial airline captain credited with saving the lives of 155 people in 2009 by landing his plane in the Hudson River when both engines failed simultaneously after hitting a flock of birds, said chaotic situations in the cockpit affect pilot response to an emergency.

"I'm one of a relatively small group of people who have experienced such a crisis and lived to share what we learned about it," he said. "I can tell you firsthand that the 'startle factor' is real —and it's huge. It absolutely interferes with one's ability to quickly analyze the crisis and take action."

The National Transportation Safety Board (NTSB), an independent federal agency charged with investigating the cause of airplane crashes and other accidents and with recommending corrective steps, said in a preliminary report on the 737 MAX crashes:

"The pilot responses differed and did not match the assumption of pilot responses to unintended MCAS operation on which Boeing based its hazard classifications within the safety assessment and that the FAA approved and used to ensure the design safely accommodates failures."

The NTSB said Boeing didn't consider the impact multiple cockpit alerts would have on the pilots' response to the hazard.

The NTSB also noted that there are established procedures for checking the reliability of a plane's hardware, but as early as 2002, aircraft designers knew "there were no methods available to evaluate the probability of human error".

Researchers have worked on the problem, but the NTSB said "such tools and methods are still not commonplace or required as part of the design certification process for functions such as MCAS on newly certified type designs".

The NTSB last month recommended the development of "robust tools and methods for validating assumptions about pilot response to airplane failures as part of design certification". But the federal agency offered no suggestions on how to devise such tools or how to test their efficacy.

In April, Boeing's CEO told reporters that pilots have a checklist of steps to determine the cause of the problem and correct it or overcome the difficulty by hitting cutout switches.

Larry Williams, a former certification and regulator enforcement support specialist for the US Federal Aviation Administration (FAA), told members of Congress that an experienced pilot should have been able to handle the situation that confronted the pilots of Lion Air on Oct 29, 2018, and Ethiopian Airlines on March 10, 2019, before their fatal plunges.

"You grab the yoke and pull it back, and if you can't override it, you just kick off trim and fly it manually. It's autopilot disconnect, basically. Push a button on the yoke and disconnect — grab the wheel and keep it from turning," he said.