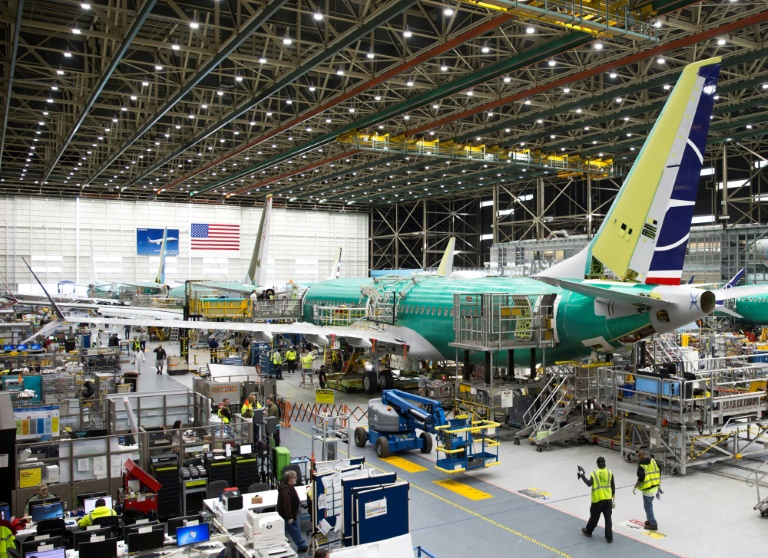 Boeing's CEO said compensation to airline customers inconvenienced by the 737 MAX could come in services or cash, depending on preference. (Photo:AFP)

The head of Boeing acknowledged Wednesday that the company "clearly fell short" in dealing with the accident-ridden 737 MAX and said that it had not adequately communicated with regulators.

Chief Executive Dennis Muilenburg's remarks to CBS News -- his first interview since the global grounding of the plane following two crashes that claimed 346 lives -- came as a top airline representative signaled that the top-selling jets could be out of service at least through mid- to late-August.

Muilenburg was pressed by CBS about failing to notify the Federal Aviation Administration for more than a year that the company had deactivated a signal designed to advise the crew of a disagreement between the plane's "angle of attack" sensors, which measure its angle vis-a-vis oncoming air to warn of impending stalls.

The sensors provide data to the Maneuvering Characteristics Augmentation System, a flight handling system connected to the deadly crashes of Lion Air and Ethiopian Airlines MAXs.

The FAA did not learn of the issue until after the Lion Air crash, more than 13 months after Boeing first unearthed the problem.

The design of the MCAS system has been criticized by aviation experts because it is tied to just one sensor at a time, making it susceptible to malfunction.

In both of the MAX crashes, the MCAS pointed the plane sharply downward based on a faulty sensor reading, hindering the pilots' effort to control the aircraft after takeoff, according to preliminary crash investigations.

Muilenburg, who has repeatedly rejected suggestions of a design flaw in the 737 MAX, acknowledged implementation shortcomings.

"The implementation of this angle of attack alert was a mistake," he told CBS. "Our communication on that was not what it should have been."

But Muilenburg, who also issued a sweeping apology to the families of flight victims during the interview, said he believes in the plane and would have no reservations putting his family aboard.

"We're confident in the fundamental safety of the airplane," he said.

Alexandre de Juniac, head of the International Air Transport Association, said Wednesday that the plane -- which has been grounded since mid-March -- will remain out of service "at least 10 to 12 weeks" while regulators review Boeing's proposed fix to the MCAS.

A note from CFRA Research characterized the timeframe for the 737 MAX resumption as "worse" than expected, but said Boeing was still well positioned once it exits the crisis.

"Our thesis on Boeing is based on long term commercial aerospace demand, a strong order book and the likelihood that Boeing will not lose significant orders as long as the plane resumes service safely," CFRA said.

"We expect continued volatility in the shares until the issues hanging over Boeing move closer to being resolved," CFRA added.

Earlier Wednesday, Muilenburg told an investor conference in New York that the company will tailor its compensation to airlines for the 737 MAX grounding around customer preference, and they could be paid back in services instead of cash.

"We know we've impacted the summer schedules for many of them, and it's difficult, it's painful," he said.

"I don't see this as an additional material event for us, but it's something that's going to require individual attention customer by customer."

Compensation could include tweaking plane delivery schedules, or offering additional training or services, as well as cash in some cases, he said.

Muilenburg described last week's meeting of international regulators as a "key" event in returning the plane to service, but acknowledged that it may take more time before global regulators are ready to approve the plane's return.

"Our hope is that we'll have a broad international alignment with the FAA," he said at the conference.

"But there may be some international authorities that will operate on a different schedule. So we'll have to tailor our plans, depending on the regulatory approval to get the airplane back up and flying."

The FAA will be the first regulator to clear the plane for service, but aviation analysts say the agency wants at least some other countries to approve the plane soon after.

Muilenburg said Boeing was prepared to be flexible as more customers get the green light.

Boeing has cut it production schedule of the 737 MAX and halted new deliveries, necessitating additional storage capacity in Washington and Texas, he said.