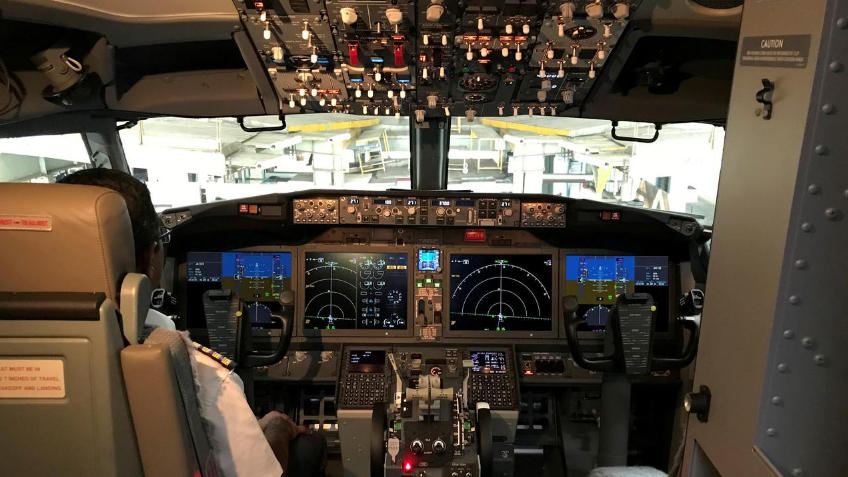 The cockpit of the Jet Airways Boeing 737 MAX 8 aircraft is pictured during its induction ceremony at the Chhatrapati Shivaji International airport in Mumbai, India, June 28, 2018. (Photo: CGTN / Reuters)

Boeing Co learned that a cockpit warning light on its 737 MAX jetliner was defective in 2017 but decided to defer fixing it until 2020, US lawmakers said on Friday.

The defective warning light alerts pilots when two sensors that measure the angle between the airflow and the wing disagree. Faulty "angle of attack" data is suspected of playing a role in two deadly crashes involving Boeing's best-selling 737 MAX in Indonesia in October and in Ethiopia in March.

Those crashes, which killed 346 people, have triggered investigations by aviation regulators and US lawmakers and left Chicago-based Boeing facing one of the biggest crises in its more than 100-year history.

Boeing decided in November 2017 to defer a software update to correct the so-called AOA Disagree alert defect until 2020, three years after discovering the flaw, US Congressmen Peter DeFazio and Rick Larsen said in a press release on Friday. Boeing only accelerated this schedule after the Lion Air accident in Indonesia, they added.

Boeing spokesman Gordon Johndroe said by email that a company safety review found the absence of the AOA Disagree alert did not adversely impact airplane safety or operation.

"Based on the safety review, the update was scheduled for the MAX 10 entry into service in 2020," Johndroe said. "We fell short in the implementation of the AOA Disagree alert and are taking steps to address these issues so they do not occur again."

Boeing has said it discovered the problem in 2017, soon after it began delivering its top-selling 737 MAX aircraft to customers. But it did not inform the US Federal Aviation Administration (FAA) about the defect until after the Lion Air crash more than one year later, the lawmakers said.

The House of Representatives Committee on Transportation and Infrastructure sent letters to Boeing, supplier United Technologies Corp and the FAA requesting further details on the AOA Disagree alert, the lawmakers said.

The letter was the second such records request sent by the committee to Boeing and the FAA related to its investigation into the MAX aircraft.