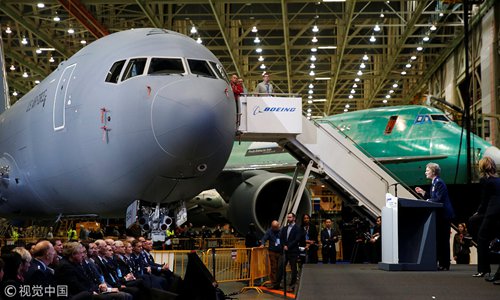 US aircraft company Boeing Friday delivered the first KC-46 refueling tanker to the US Air Force Altus Base in Oklahoma State, Boeing said. Friday's delivery came less than a month after Boeing delivered the first KC-46 tanker to the McConnell Air Force Base in the Midwestern state of Kansas. The delivery follows a two-year delay, which cost the world's largest aircraft manufacturer more than $3 billion and prompted the US Air Force to withhold 20 percent of the payment to Boeing until progress is made fixing a number of software and hardware issues, according to Sputnik. Boeing said that "three additional KC-46A aircraft will be delivered to Altus in the coming weeks." The multi-role KC-46 tanker was made from the airframe of Boeing's commercial 767 jet and built in Boeing's facility in Everett, Washington state. The aircraft can carry more than 90,718 kg of fuel and up to about 29,485 kg of cargo. Boeing is currently on contract for 52 of an expected 179 tankers for the US Air Force.