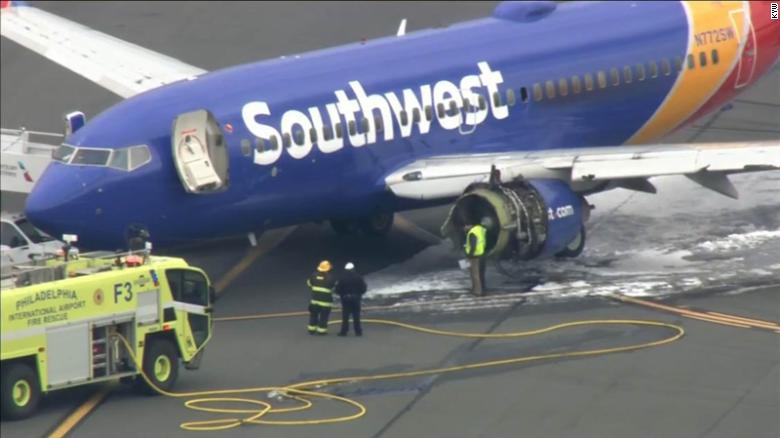 A window is missing from the plane of SWA airline Tuesday at the Philadelphia airport. (Photo: AP)

SAN FRANCISCO, April 17 - US leading aircraft manufacturer Boeing Company (Boeing) Tuesday issued a brief statement expressing condolences over the death of a passenger aboard a US airliner on a flight from New York City to Dallas.

"Boeing extends its deepest condolences to the family of the passenger who passed away as a result of today's incident on SWA (Southwest Airlines) Flight 1380," Boeing said in the statement.

It said a Boeing technical team is providing assistance at the request and under the direction of the US National Transportation Safety Board (NTSB) as the agency conducts its investigation.

A female passenger, who was later identified as Jennifer Riordan, a married mother of two, was killed when an engine of her flight jet failed and blew out a window on Tuesday.

Riordan was critically injured when she was sucked out the broken window, said some witnesses, adding that she was in cardiac arrest after being pulled back into the plane.

The SWA Boeing 737-700 was forced to make an emergency landing in the US city of Philadelphia due to the engine failure.

Southwest Airlines said in a statement that 143 travelers and five crew members were on the flight and the company was trying to gather further information.

Photos shared on social media by passengers showed the engine was badly damaged.

The Philadelphia fire department said at a press conference the plane came down "in a fairly rapid manner," and preliminary examination of the flight record showed the aircraft dropped 5.2 km in five minutes.

The US NTSB has announced an investigation into the incident, and all air traffic at Philadelphia was put on hold.