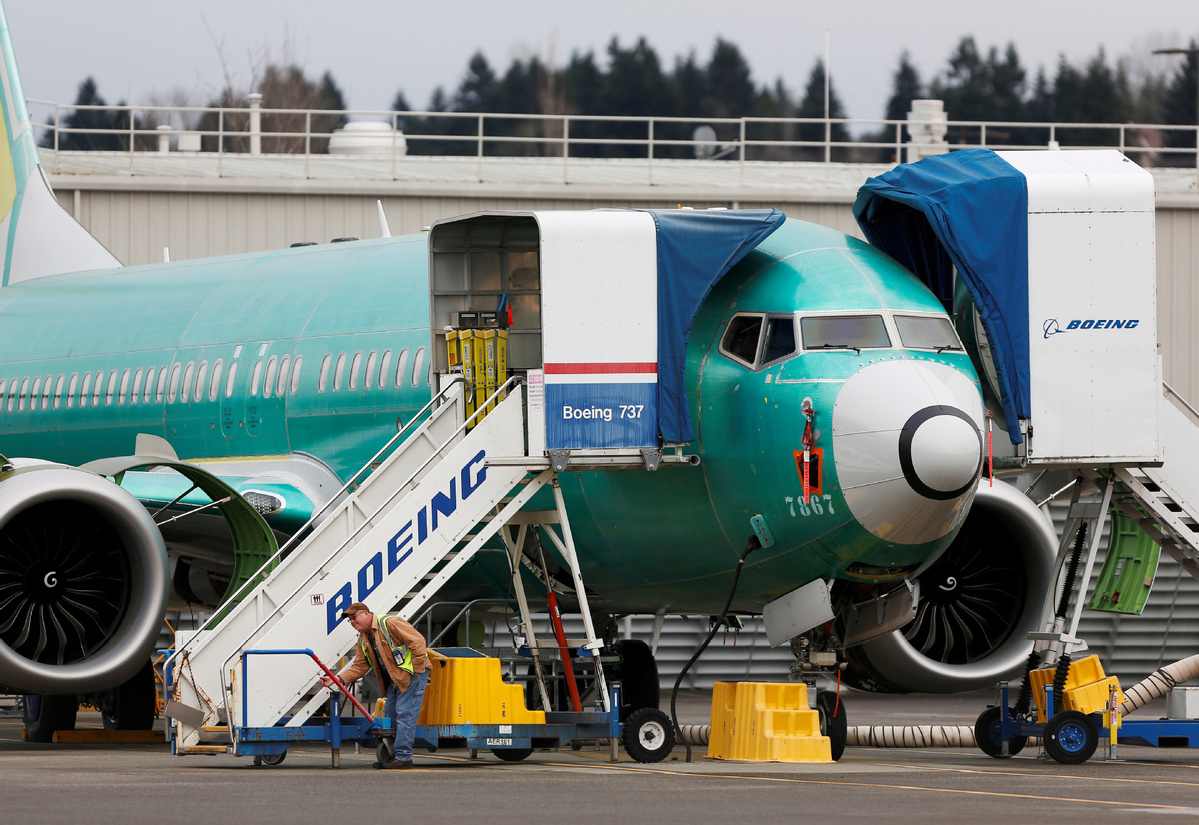 An employee works near a Boeing 737 Max aircraft at Boeing's 737 Max production facility in Renton, Washington, US, on Dec 16, 2019. (Photo:Agencies)

WASHINGTON－Boeing and the US Federal Aviation Administration, or FAA, confirmed on Sunday that they are reviewing a wiring problem that could potentially cause a short circuit on the grounded 737 Max jets.

Boeing spokesman Gordon Johndroe said on Sunday the US plane-maker "identified this issue as part of that rigorous process, and we are working with the FAA to perform the appropriate analysis. It would be premature to speculate as to whether this analysis will lead to any design changes".

The FAA said in a statement on Sunday the agency and company "are analyzing certain findings from a recent review of the proposed modifications to the Boeing 737 Max". The agency added it will "ensure that all safety related issues identified during this process are addressed".

Boeing is currently working on a plan that would separate the wiring bundles if necessary and conducting extensive analysis to establish if an electrical fault could occur in a real-world scenario, a company official said.

Officials said the FAA had directed Boeing to complete an audit in December. The wiring issue could push back the return of the Max, the officials added. Reuters has reported previously that the FAA is not likely to approve the plane until at least February and might not until March or later.

The FAA flagged the wiring issue as potentially "catastrophic." It is possible other protections like shielding, insulation and circuit breakers could prevent the short circuit, a company official said.

Boeing will halt production of the 737 Max this month following the grounding in March of its best-selling plane after two fatal crashes in five months killed 346 people.

Last month, Boeing's board fired Dennis Muilenburg as chief executive after repeatedly failing to contain the fallout from the crashes that tarnished the company's reputation with airlines and regulators.

The crisis has cost Boeing $9 billion, and has hurt suppliers and airlines.

Boeing is struggling to mend relations with the US and international regulators that it needs to win over to get the jet back in the air.

Separately, US and European regulators are expected to return to Iowa this week to review a software documentation audit of the 737 Max that was not completed last year, officials said on Sunday. The FAA and the European Union Aviation Safety Agency are scheduled to meet in Seattle this week and then return to the Rockwell Collins facility in Cedar Rapids, Iowa, next weekend to review the audit.