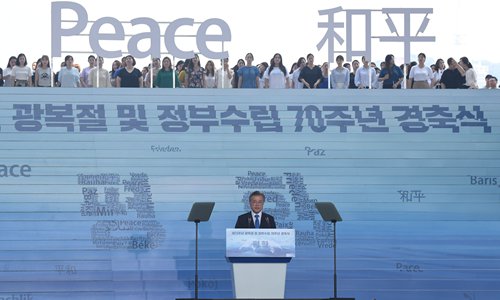 South Korean President Moon Jae-in delivers a speech in front of a backdrop that reads "Peace" during a ceremony marking the 73rd anniversary of the country's liberation from Japan, August 15, 2018. (Photo: VCG)

South Korean President Moon Jae-in said Wednesday his visit to Pyongyang next month will be a "bold step" toward formally ending the decades-old war with the nuclear-armed North.

The two Koreas agreed earlier this week to hold a third meeting between Moon and North Korean leader Kim Jong Un in September as a rapid diplomatic thaw builds on the peninsula following their first summit in April.

The leaders will "take a bold step towards declaring an end to the war and a peace treaty," Moon said at a ceremony marking the 73rd anniversary of liberation from Japanese colonial rule in 1945.

The 1950-53 Korean War ended with an armistice rather than a peace treaty, leaving the two neighbors technically still in a state of conflict.

The signatories to the armistice included the US-led United Nations Command - that fought alongside the South's troops - as well as China and North Korea.

Declaring an end to the war was one of the agreements at the ground-­breaking April summit, but little progress has been made with the United States and North Korea at loggerheads over Pyongyang's denuclearization.

The US State Department said Tuesday that while Washington supports "a peace regime," its prime goal was ending North Korea's nuclear and missile programs.

"Our main focus is on the denuclearization of the Korean Peninsula," State Department spokeswomen Heather Nauert told reporters.

China welcomed the September summit on Wednesday, saying it believed the talks will help promote the denuclearization of the peninsula.

Moon brokered the historic summit between US President Donald Trump and Kim in Singapore in June where the two leaders signed a vague agreement on denuclearization.

"Deeply-rooted distrust" must be removed for each side to carry out the agreements, Moon said, but added the two Koreas must lead the current diplomacy on the peninsula. "An improvement in inter-Korean ties is not a collateral benefit to better relations between the US and the North," he said.

The dovish South Korean leader offered his vision for economic cooperation with the North once the peninsula is denuclearized, stressing that true liberation will only be achieved by ending the division.

The rapid rapprochement between the two neighbors began this year ahead of the Winter Olympic Games in the South and cross-border exchanges have significantly increased since then.