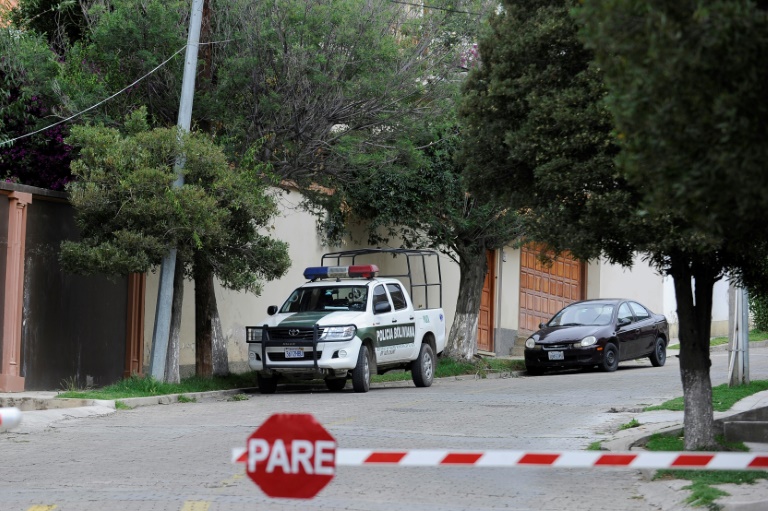 Bolivia on Saturday accused Spain of an abortive attempt to extract a wanted former government aide from Mexico's embassy in La Paz, prompting a sharp denial from Madrid.

It was the latest twist in a murky incident Friday involving embassy personnel in the Bolivian capital that has sparked a bitter diplomatic spat.

Several hours later, Bolivia's top diplomat accused Spanish embassy staff of trying to infiltrate the Mexican mission with a group of masked men in what it said was a violation of Bolivian sovereignty.

"We believe it was aimed at extracting the criminal Juan Ramon Quintana," said Interior Minister Arturo Murillo on Saturday, referring to a former aide to ousted Bolivian president Evo Morales who stands accused of sedition and terrorism.

The embassy in La Paz became the center of the diplomatic row after it sheltered nine or more officials from Morales's former government, some of them charged by the interim government in Bolivia with "sedition" or "terrorism" over the deaths of 36 people in violently quashed protests.

"The ministry wishes to clarify that the charge d'affaires was purely making a courtesy visit and vehemently denies there was any aim to facilitate the exit of people holed up inside the building," a foreign ministry statement said.

Madrid said it would send a team of investigators to La Paz "in coming days." It would not confirm or deny reports an official had already left for Bolivia.

Murillo said he would ask interim Bolivian president Jeanine Anez and Foreign Minister Karen Longaric to order the expulsion of Spanish diplomats. "They cannot do whatever they want," he said.

On Friday, Longaric said "people identified as staff members at Spain's embassy in Bolivia, accompanied by people with their faces covered, tried in a secretive and underhanded manner to enter Mexico's diplomatic residence in La Paz."

She said they were "presumably armed."

Longaric added that embassy staff in Bolivia were not authorized to carry firearms or conceal their identity.

Footage shown on Spanish television appeared to show guards pointing guns at an approaching car. Several men get out, at least one in dark glasses with his face covered with a balaclava. Several neighbors shouted angrily at the men and kicked their car.

Spain's El Pais and El Mundo newspapers both said the men were members of a special Spanish police unit assigned to protect embassy personnel, but there was no confirmation from officials in Madrid.

La Paz has sent a letter of complaint to Madrid citing a "serious trampling of Bolivia's sovereignty," with copies to the European Union, the United Nations and the Organization of American States.

In Mexico City, the foreign ministry said the incident occurred as Borreguero and Spanish consul Alvaro Fernandez wrapped up a meeting with the ambassador.

But their official vehicles never turned up, and neither of them was able to reach their drivers or their security detail, a ministry statement said.

"On hearing shouting, Ambassador Mercado invited the two visitors to re-enter the residence. At that point, the Spanish diplomats were informed that their vehicles had been stopped from entering."

The Spaniards were advised to leave the embassy on foot but refused to do so without a security detail. Eventually a Bolivian ministry car was sent to pick them up.

The presence of former top Bolivian officials inside the embassy has provoked a number of tense exchanges between La Paz and Mexico City.

Bolivia has warned that Mexico will face a "very serious problem" if its embassy refuses to hand over the wanted officials, while Mexico has accused La Paz of "harassment and intimidation" for deploying multiple police and intelligence officers outside the premises.

Bolivia has been in turmoil since late October. Morales's insistence after 14 years in power that he had been elected to a fourth term in a widely disputed vote prompted massive and violent street protests.

On November 10, after losing the army's backing, Morales resigned and fled to Mexico, before moving on to Argentina.