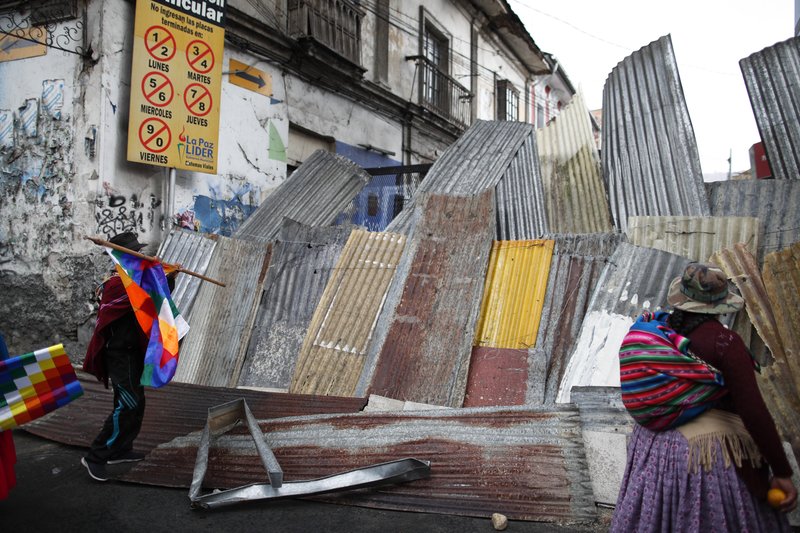 Supporters of former President Evo Morales stand on a barricaded street leading to the presidential palace during a march in La Paz, Bolivia, Thursday, Nov. 14, 2019. Morales resigned and flew to Mexico under military pressure following massive nationwide protests over alleged fraud in an election last month in which he claimed to have won a fourth term in office. (Photo: AP)

Bolivia’s former President Evo Morales cannot run as a candidate in any new elections, but his political party can, the country’s interim leader said Thursday.

“We have to let the Mexican government know that cannot be happening,” said Añez, who says she wants to restore stability in Bolivia but has been accused of a power grab by Morales supporters.

In a country gripped by turmoil, it was unclear whether election officials would have to formally bar Morales from running in a new election.

Bolivia’s first indigenous president resigned on Sunday at military prompting following massive nationwide protests over alleged fraud in an Oct. 20 election in which he claimed to have won a fourth term in office. An Organization of American States audit of the vote found widespread irregularities.

Much of the opposition to Morales sprang from his refusal to accept a referendum that would have forbidden him from running for a new term.

The pro-Morales Movement Toward Socialism party “has all the right to participate in elections, they can look for candidates,” Añez said.

But she said Morales and Álvaro García Linera, the former vice president who also resigned, cannot participate, she said.

Bolivia’s new interim government has begun winning some international recognition but faced challenges to its legitimacy at home.

Mexico welcomed Morales this week after he resigned. Mexico’s government referred to the ouster as a coup d’etat, as have other left-leaning administrations in Latin America. But Añez has gained recognition from other regional governments, including Brazil, Guatemala and Colombia, as well as the United States and United Kingdom.

Añez also announced she would recognize Venezuela’s U.S.-backed opposition leader, Juan Guaidó, as that country’s legitimate leader, joining the U.S. and 50 other countries in repudiating socialist President Nicolás Maduro, an ally of Morales.

But members of the new Bolivian leadership were focused on challenges continuing at home.

Members of the Movement Toward Socialism party, who dominate both houses of Congress, began holding legislative sessions Wednesday aimed at questioning the legitimacy of Añez, who had been no higher than fifth in the line of succession before Morales resigned. She won recognition because those above her, all Morales backers, also announced their resignations — though some later tried to recant their resignations.

Barricades blocked some streets into El Alto on Thursday and some gas stations ran out of fuel.

In addition to accusing Morales of inciting violent dissent, the new government also took aim at some of his allies at home.

Añez’s new interior minister, Arturo Murillo, said Wednesday that he had spoken with police and ordered a hunt for his predecessor, Juan Ramón Quintana — using the Spanish word for hunt that applies to chasing an animal.

“Why is it a hunt? Because he is an animal who is killing people,” Murillo said. Quintana apparently had vanished from sight.

“Those who deal in sedition, as of tomorrow, take care,” he warned.

The unrest is a key part of the challenges facing Añez, a second-tier lawmaker before she thrust herself into the presidency, citing the power vacuum created by Morales’ departure.

She needs to win recognition, stabilize the nation and organize new elections within 90 days, rebuilding after weeks of violent protests against Morales following the disputed election.

“If this is seen by the indigenous social movement as an effort by the old elite to restore the old order in Bolivian society, I think that is a recipe for tremendous political conflict,” said Kenneth Roberts, professor of government at Cornell University in Ithaca, New York.

U.N. Secretary-General Antonio Guterres is sending a personal envoy to Bolivia to support efforts to find a peaceful solution to the crisis.

The new envoy, Jean Arnault, was traveling to Bolivia on Thursday, according to U.N. spokesman Stephane Dujarric.

Morales upended politics in this nation long ruled by light-skinned descendants of Europeans by reversing deep-rooted inequality. The economy grew strongly thanks to a boom in prices of commodities and he ushered through a new constitution that created a new Congress with seats reserved for Bolivia’s smaller indigenous groups while also allowing self-rule for all indigenous communities.

Although some supporters had been disenchanted by his insistence on holding on to power, he remains popular, especially among other members of his native Aymara ethnic group. Many worry they might lose their gains, and they have been protesting reports that the multicolored Wiphala flag that represents them has been burned by people who sympathize with the opposition.

“More than 13 years of progress under Evo were lost in a minute when he resigned,” said Magenta Villamil, a demonstrator.

Morales’ backers, who hold a two-thirds majority in Congress, boycotted the session that Añez called Tuesday night to formalize her claim to the presidency, preventing a quorum.

She claimed power anyway, saying the constitution did not require congressional approval. The military, police and opposition parties quickly accepted her and Bolivia’s top constitutional court issued a statement laying out the legal justification for Añez taking the presidency, without mentioning her by name.

But other legal experts questioned the legal technicalities that led to her claim, saying at least some of the steps required a session of Congress.

Añez swore in a new Cabinet on Wednesday, and named new commanders in chief for all branches of the military.

Añez has also received the backing of Morales’ main election rival, former President Carlos Mesa, who came in second in the Oct. 20 ballot.