WORLD Bolsonaro to visit Trump to firm up conservative alliance

Bolsonaro to visit Trump to firm up conservative alliance 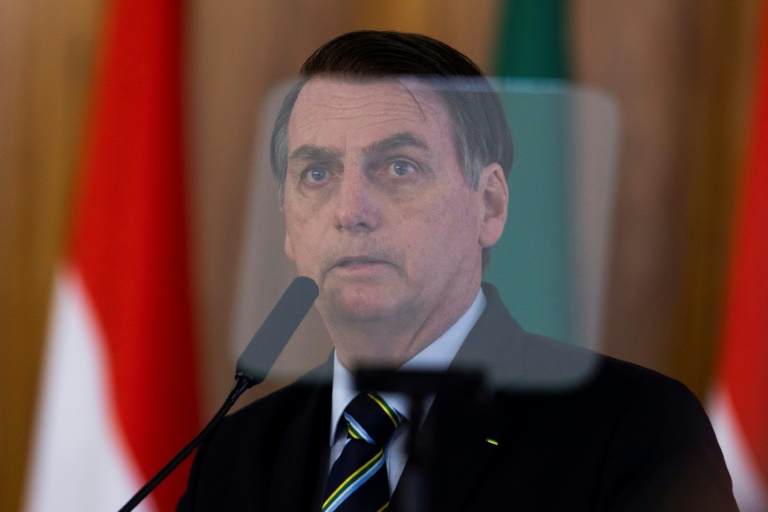 Brazil President Jair Bolsonaro is making the United States his first overseas destination for a bilateral meeting with a fellow leader. (Photo: AFP)

Brazil's far right President Jair Bolsonaro will meet US counterpart Donald Trump next week to strengthen ties in the nascent regional conservative alliance aiming to ramp up the pressure on Venezuela's Nicolas Maduro.

After decades of fractious relations between Brasilia and Washington, things have improved with the assumption to power of ex-army captain Bolsonaro -- nicknamed the "Tropical Trump" both due to his admiration for the US president and his ideological proximity in terms of nationalism and anti-globalization.

"It's the president's first foreign bilateral visit, which demonstrates the priority the government is giving to building a solid association with the United States," Bolsonaro's spokesman Otavio do Rego Barros said on Wednesday.

Alongside six ministers and his federal lawmaker son Eduardo -- who has been active in building links with fellow conservatives -- Brazil's president will spend four days in Washington from Sunday to Wednesday.

He will stay at Blair House, an official US state residence opposite the White House used for visiting dignitaries.

As well as a "private meeting" with Trump at the Oval Office on Tuesday, Bolsonaro will sit with Organization of American States Secretary General Luis Almagro, and participate in various forums discussing the opportunities offered by the Brazilian economy.

The US is Brazil's second biggest trade partner after China.

On Sunday night he will dine at the residency of Brazil's ambassador with "several opinion formers" including, according to press reports, former Trump adviser Steve Bannon and US-based Brazilian writer Olavo de Carvalho, considered Bolsonaro's guru.

Trump and Bolsonaro will discuss one of the issues that most unites them: their desire to drive Maduro from power.

The US was the first of more than 50 countries, closely followed by Brazil, to recognize Venezuela's opposition leader Juan Guaido as interim president, boosting his power struggle with Maduro.

Washington has also cranked up sanctions against the Maduro regime, including imposing an embargo on Venezuelan crude oil, due to come into effect on April 28.

Trump has repeatedly insisted that "all options are on the table" with regards military intervention in Venezuela.

But that's not an opinion shared by Bolsonaro, who in line with other members of the mostly Latin American Lima Group has ruled out military action in favor of a policy of tightening the economic and diplomatic noose around Maduro.

"Brazil is unlikely to take military action to address the situation in Venezuela, but we may see a strong stance being taken by Bolsonaro publicly following this trip to Washington," Roberta Braga, associate director at the Latin American center of the Washington-based Atlantic Council, told AFP.

Trump wants a heavyweight ally such as Brazil "to continue putting the pressure on Maduro and ensure the wave of support Guaido has received doesn't diminish over time," said Thomaz Favaro, an analyst at Control Risks.

Spokesman Do Rego Barros said Trump and Bolsonaro will sign three agreements, without elaborating what they ould be.

One of those is expected to be the granting of technological safeguards for the US to use the satellite launching base in Alcantara, an idea that has angered sectors of Brazilian nationalists who view it as a potential loss of sovereignty.

The base in northern Brazil is ideally located for launching satellites.

Its position close to the equator allows for the saving of up to 30 percent in fuel or the loading of an increased cargo.

"The Alcantara agreement is another sign of Bolsonaro's alignment with the United States, like his accepting the deal between Boeing and Embraer," internationalist Paulo Wrobel, from Rio de Janeiro's Pontifical Catholic University, told AFP.

Analysts expect the two leaders to discuss measures to increase bilateral business -- without infringing on Mercosur limits imposed on Brazil -- and the entry of the South American giant into the Organisation for Economic Co-operation and Development (OECD).

Following his US jaunt, Bolsonaro will visit China and Israel in a clear sign of his intention to approach governments he considers committed to his ideological conservatism and economic liberalism.