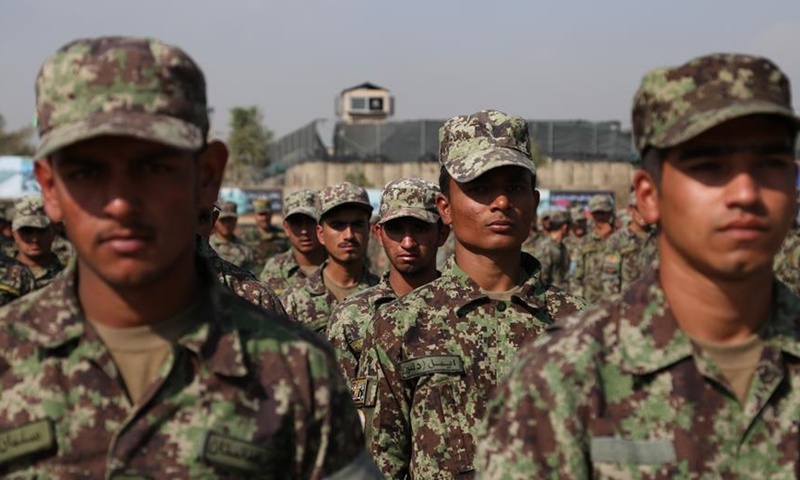 Soldiers take part in their graduation ceremony at Kabul Military Training Center in Kabul, Afghanistan, Oct. 10, 2020. A total of 1,227 youth were commissioned to the Afghanistan National Army on Saturday after completing a three-month military training. (Photo: Xinhua)

A car bomb Sunday targeting an Afghan police headquarters in the western province of Ghor killed at least 12 civilians and wounded more than 100, officials said.

The attack took place in Feroz Koh, the capital of Ghor, a province that has not seen much violence compared to some other regions of the conflict-wracked country.

"The terrorists detonated an explosives-filled car... as a result 12 civilians were killed and more than 100 people were wounded," the interior ministry said.

The presidency blamed the Taliban for the attack.

Peace talks between the Taliban and Afghan government began in Qatar in September, but violence has continued unabated on the ground.

Thousands of families were forced to flee from their homes in the restive southern province of Helmand in October as fierce fighting erupted between the Taliban and government forces.

Sporadic fighting continued even on Sunday as government forces pushed with a counter-offensive to retake some of the lost ground in and around the provincial capital of Lashkar Gah, officials said in a statement.

The Taliban, however, charged American forces with violating that deal by carrying out air strikes in Helmand against their fighters.

The US military dismissed the Taliban's accusation.