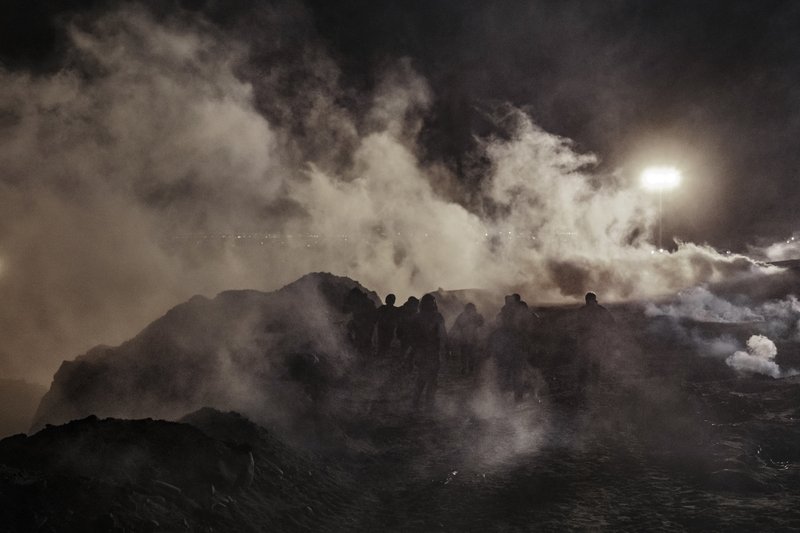 Migrants run after US Border Patrol agents throw tear gas to the Mexican side of the fence after the migrants climbed the border fence to get into the US side to San Diego, from Tijuana, Mexico, Tuesday, Jan. 1, 2019. Discouraged by the long wait to apply for asylum through official ports of entry, many migrants from recent caravans are choosing to cross the US border wall and hand themselves in to border patrol agents. (Photo: AP)

Just after people raised their glasses to ring in the New Year, about 150 migrants gathered at a section of border wall in Tijuana to try to cross into the United States, many of them asylum seekers fed up with the long wait to have their claims processed.

On the other side, US Border Patrol agents wearing camouflage and night-vision goggles and carrying assault-style rifles yelled, "Don't jump. It's dangerous. Get back!" in Spanish. American activists accompanying the migrants shouted at agents in English not to fire tear gas because children were present.

Several migrants tried to climb the metal wall, prompting agents to fire the first volley of tear gas. When migrants approached the wall again, authorities fired a second round and then a third.

The migrants fled, screaming, crying and coughing. One mother was hysterical after briefly losing her children in the thick smoke and darkness.

"The children were crying," said Jose Fajardo Anariba, 16, from Tegucigalpa, Honduras. "They couldn't tolerate it."

Tuesday's confrontation was at least the second time in a little over a month that US authorities have fired tear gas into Tijuana. The action drew sharp criticism from politicians and activists on both sides of the border and raised questions about the use of force against migrants.

Instead of offering the asylum seekers protection, "border agents are firing tear gas at vulnerable families with children," Andrea Guerrero, head of the advocacy group, Alliance San Diego, said in a statement.

At a Cabinet meeting Wednesday at the White House, President Donald Trump said the clash showed that "people tried to charge the border and couldn't." With a complete wall, no one could enter unless that person was a "champion pole vaulter."

He described the border as being "like a sieve" and noted that the tear gas was "flying" to deter the migrants and added that it's "very tough" to keep immigrants out.

Trump was making his case for $5.6 billion from Congress for a wall at the border and vowing that the partial government shutdown now in its 12th day will last "as long as it takes" to get the money.

US Customs and Border Protection said tear gas, pepper spray and smoke were used to target rock throwers, not the migrants who were trying to cross. The agency said it could not help small children who were being passed over the concertina wire from getting hurt because of the rocks being thrown.

An Associated Press photographer saw rocks thrown only after US agents fired the tear gas. Customs and Border Protection said the incident would be reviewed to ensure compliance with the agency's use-of-force policy.

The agency said 25 migrants were detained while others crawled back into Mexico through a hole under the fence. An AP photographer saw migrants put their hands up or behind their heads once they crossed the border as agents approached.

Anariba said he would try to climb the border wall again. His mother was killed in Honduras, and he has nothing in his homeland, he said.

Since a caravan of Central Americans arrived in Tijuana last month after walking, hitchhiking and taking buses across Mexico, daily apprehensions in the San Diego sector have jumped about 45 percent. Agents are now detaining about 150 migrants a day, compared with about 105 daily in 2018, authorities said.

Many of the migrants are waiting in Tijuana for a chance to apply for asylum in the US, but there was a backlog of more than 3,000 names at the San Diego crossing before the caravan's arrival.

A few have found jobs in Mexico and tried to settle there. But thousands are still camped in a concert hall in Tijuana, growing increasingly frustrated at the long wait to apply for asylum.

On Nov. 26, US agents launched tear gas across the border after some migrants tried to breach the border following a peaceful march in Tijuana. The march was to demand US authorities accelerate the asylum process.

US officials are processing fewer than 100 claims a day at the San Diego crossing, the nation's busiest.

Use of force by Customs and Border Protection has declined from a high during the 2013 budget year, when firearms were used 45 times compared with 14 times during the first 11 months of 2018, government statistics show. Since then officers have been trained to use less lethal methods such as batons, pepper spray and tear gas.

The data includes Border Patrol agents who patrol between the ports of entry and officers who police border crossings. The latest figures, which do not include this month's incidents, also show a dramatic drop in the use of less-lethal methods compared with 2013.