Boris Johnson heads to UN in push for Brexit deal

British Prime Minister Boris Johnson will hold talks with European leaders on the sidelines of the UN General Assembly (UNGA) in New York next week as part of his push to secure a Brexit deal by the end of October. 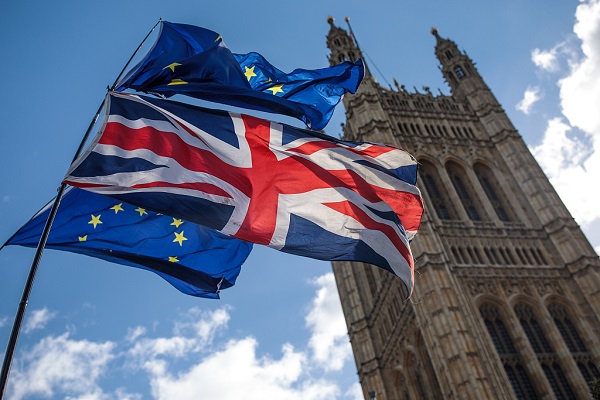 Anti-Brexit protesters demonstrate with flags outside the House of Parliament on March 11, 2019 in London, England. (File Photo: VCG)

Johnson is due to meet Irish Prime Minister Leo Varadkar, European Council President Donald Tusk, French President Emmanuel Macron and Germany's Angela Merkel on Monday and Tuesday, a senior UK official said.
"What this gives the Prime Minister an opportunity to do is talk to them at leader level about what some of our proposals are," the official said.

"We are under no illusions that there is an awful lot of work still to do, and you should view the discussions at UNGA as part of an ongoing process."

Johnson has promised to take Britain out of the European Union on October 31, with or without a deal, and is seeking changes to the agreement his predecessor Theresa May reached with Brussels.
Earlier this week, Britain shared technical documents with Brussels setting out its ideas for dealing with the contentious issue of the border between Northern Ireland and Ireland. These were not the formal written legal proposals Brussels has asked for, however.
The British official said the New York talks would be a chance to discuss the ideas set out in the papers, which covered agri-food, customs and manufactured goods.

"They do provide a significant amount of detail on what we are proposing as a potential way forward," the official said.
"What is obviously encouraging is it is clear that all sides do want to try and achieve a deal, so the onus now is on everybody to work hard to try to find a way through."
In New York, Johnson will address a breakfast meeting of British and American business leaders on Tuesday, during which he will set out his pitch for why they should invest in post-Brexit Britain.
He is also due to hold bilaterals with leaders including U.S. President Donald Trump, Indian Prime Minister Narendra Modi, Turkish President Recep Tayyip Erdogan and New Zealand's Prime Minister Jacinda Ardern.