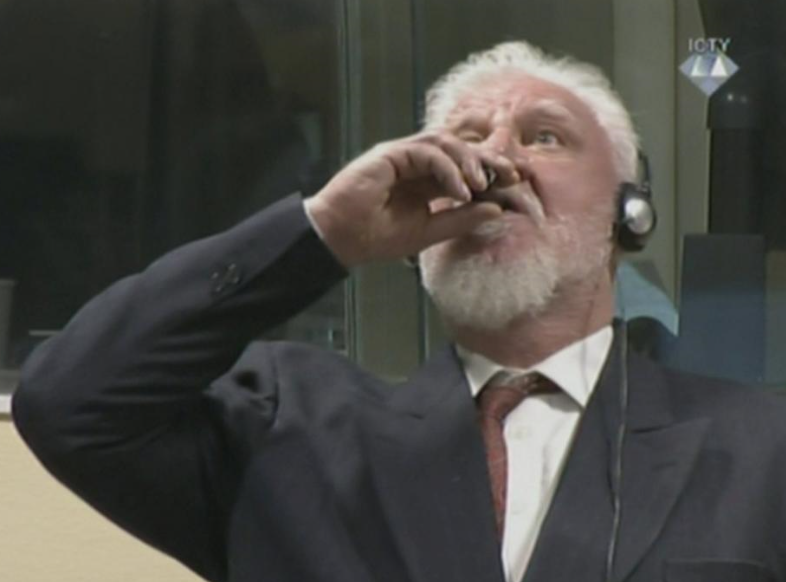 A Bosnian Croat war criminal died Wednesday after apparently drinking poison in dramatic courtroom scenes after UN judges upheld his 20-year jail term, Croatian media said, throwing the tribunal into chaos during its final judgement.Slobodan Praljak, 72, died in hospital, according to Croatia's state-run news agency HINA after he drank from a brown bottle at the hearing at the International Criminal Tribunal for the former Yugoslavia (ICTY) in The Hague.After the judges upheld a 20-year jail term originally imposed in 2013, Praljak, a former military commander of a breakaway Bosnian Croat statelet, shouted out angrily: "Praljak is not a criminal. I reject your verdict." He then raised a small brown bottle to his lips, and tipped it into his mouth in full view of the cameras filming the appeal hearing for the six Bosnian Croat political and military leaders.The hearing was then quickly suspended as Praljak's lawyer shouted out: "My client says he has taken poison."Resuming a few hours later amid confusion, presiding judge Carmel Agius revealed Dutch authorities had already launched an investigation into the incident."Courtroom one is now a crime scene," Agius said, but gave no details on what had happened to Praljak except to say he was not in court.Court officials also said they had "no comment" on what had happened.Earlier, AFP journalists had seen an ambulance arrive outside the tribunal in The Hague, and several emergency rescue workers rushed into the building carrying backpacks. In the complex ruling the judges upheld the jail terms against all six defendants, including a 25-year sentence imposed on Jadranko Prlic, the former prime minister of the breakaway Bosnian Croat statelet, known as Herzog-Bosna.