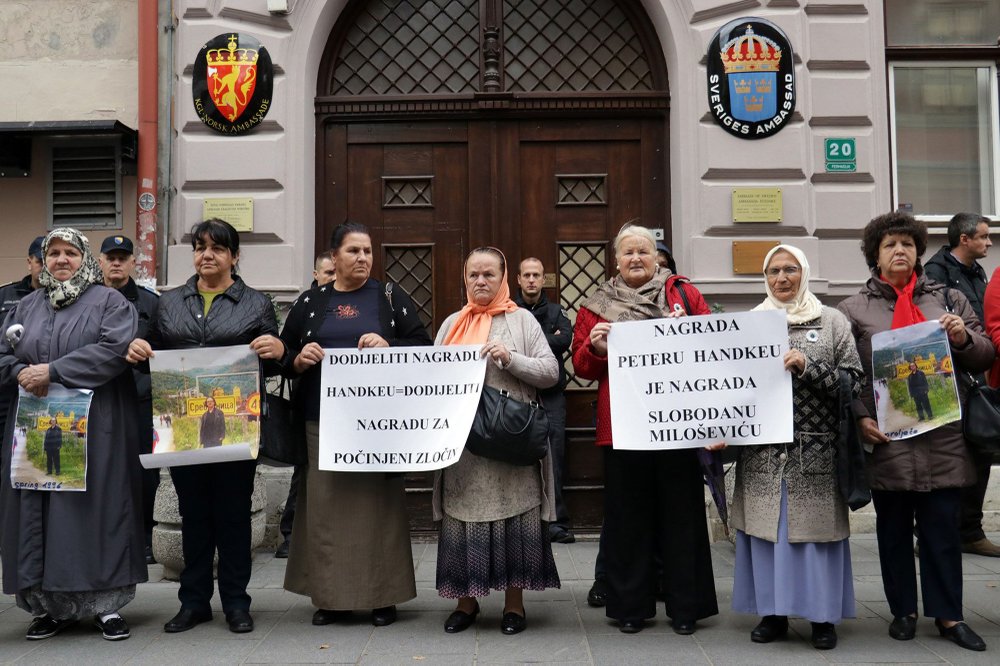 Bosnian women whose male family members, including sons and husbands, perished in the Srebrenica massacre hold placards as they protest outside the Swedish embassy in Sarajevo, Bosnia-Herzegovina, Tuesday, Nov. 5, 2019. (Photo: AP)

Bosnian war survivors, including mothers who lost husbands and sons in the Srebrenica massacre, protested Tuesday in Sarajevo, urging the Nobel Committee to reverse its decision to award the 2019 Nobel Prize in the literature to Austrian writer Peter Handke.

All three former Serb leaders were tried for genocide before a UN tribunal handling war crimes from Bosnia’s 1992-95 war. Milosevic died in 2006 before the end of his trial, while Karadzic and Mladic were convicted and imprisoned for life.

Handke, 76, has long faced criticism for his vigorous defense of the Serbs during the 1990s wars that devastated the Balkans as Yugoslavia disintegrated. He even spoke at Milosevic’s 2006 funeral, calling him “a rather tragic man.” And despite UN court rulings to the contrary, Handke has persistently denied that genocide took place in Bosnia’s 1995 Srebrenica massacre.

Bosnian Muslim women whose husbands and sons were slain at Srebrenica joined the protest, carrying Handke’s photo with the words “awarding Handke equals awarding war crimes” written over it.

″(Handke) supported war criminals, he does not deserve the (Nobel),” said Tahirovic, a member of a survivors’ group for Bosnian Serb war-time torture camps.

The protest was timed to coincide with an official three-day visit to Bosnia by Swedish Crown Princess Victoria and Prince Daniel, who were expected later Tuesday.

More than 8,000 Bosnian Muslim men and boys were killed in days of slaughter after the UN-protected enclave of Srebrenica was overrun by Bosnian Serb forces on July 11, 1995. It is the only episode of Bosnia’s war to be defined as genocide by two UN courts.

Serbs hastily disposed of the victims’ bodies in several large pits, then dug them up again and scattered the remains over the nearly 100 smaller mass graves and hidden burial sites around the town.

Tens of thousands of massacre survivors gather outside Srebrenica on July 11 each year to commemorate the crime and bury the newly exhumed and identified remains of victims. The event is typically attended by international leaders.

Munira Subasic, who lost her husband and son in the massacre, said the mothers of Srebrenica victims group wrote a letter to the Swedish queen as “fellow mothers” to let her know of Handke’s support for Serb war criminals during the 1990s Yugoslav wars. They invited the Swedish queen to visit Srebrenica for commemorations next July on the 25th anniversary of the genocide.

“I think that genocide denial is the final stage of that crime, awarding (Handke) a Nobel Prize is the last stage of genocide,” Subasic said.