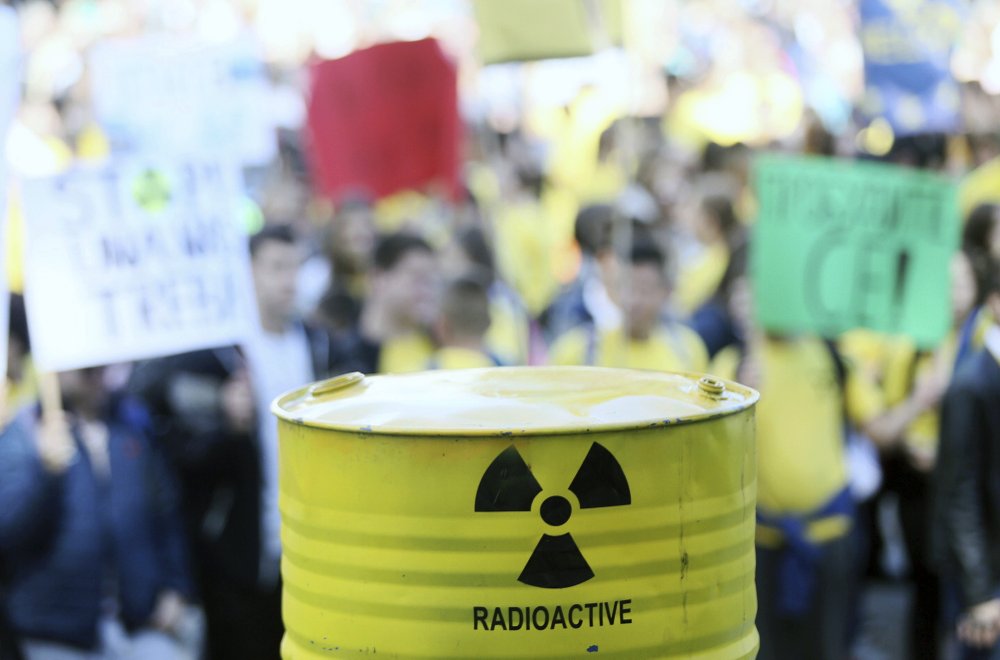 Hundreds of Bosnians protest against plans by neighboring Croatia to store part of the waste from the region's only nuclear plant near its border with Bosnia, in the northwestern Bosnian town of Novi Grad, Friday, Sept. 27, 2019. (Photo: AP)

Hundreds of people rallied Friday in northwest Bosnia against plans by neighboring Croatia to store part of the waste from the region’s only nuclear plant near its border with Bosnia and a main river known for its natural beauty.

The protesters in the Bosnian town of Novi Grad urged Croatia to abandon plans for a storage site at a former army barracks in Trgovska Gora and pledged to fight the project. The facility would hold waste from the Krsko nuclear plant.

Holding banners reading “I want a healthy future” and “Stop - the Una (river) needs us,” Bosnians they said a nuclear waste facility could endanger the Una River and the lives of around 250,000 area residents.

“We have to say NO!” Miroslav Drljaca, the head of Novi Grad municipality told the crowd. “We must fight to preserve our way of life and our Una.”

Located in Slovenia, the 1980s’ Krsko plant is owned jointly by Croatia. Officials from the two countries are set to meet next week to discuss additional waste storage facilities.

Croatia’s state HRT television reported Friday that Croatia was yet to decide whether it would build storage of its own or pay to store its share of waste at a new facility Slovenia is building.

Croatian Minister of Environment Protection and Energy Tomislav Coric told the broadcaster that Croatia also has a problem disposing of institutional waste from schools, hospitals and prisons, and was hoping to find an overall solution.

In Bosnia, activists, officials and residents from all sides of the country’s ethnic divide insisted that Croatia find another location in a part of the country nearer to the nuclear.

“How come that out of entire Croatia, the best is the Trgovska Gora pocket that is in Bosnia’s pants?” asked Drljaca. “We must not let them humiliate us!”