When Marko Cheseto lines up in Hopkinton for the start of the Boston Marathon next week, he will already be looking past the finish line, 26.2 miles away. 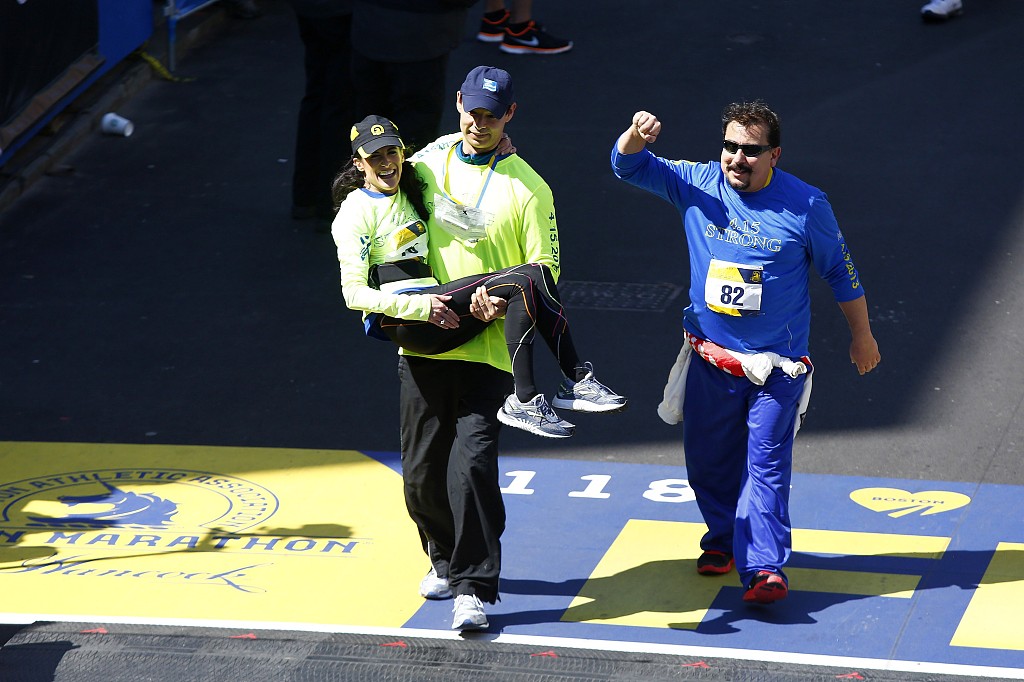 It's next year, when organizers will christen three new para athlete divisions, that he will have a chance to claim something he covets even more than a new personal best: a full-fledged Boston Marathon victory, and the possibility of climbing the podium on his two prosthetic legs just steps away from the spot where so many lost their limbs in the 2013 finish line attacks.

"I want those who were injured through that to know that we are here with them," said Cheseto, an All-American distance runner at Alaska-Anchorage who lost both feet to frostbite after he was stranded in a blizzard for 56 hours.

"We, as human beings, are very resilient; we have a lot of good people out there; we can show our solidarity out there," said Cheseto, a native Kenyan who became a US citizen in November — seven years to the day after he went missing. "Together, we can do good things."

The world's oldest and most prestigious annual marathon, Boston was the first major 26.2-miler (42.195 kilometer) to include a wheelchair division, in 1975. Once again, the wheelchair racers will be the first to break the tape on Boylston Street on April 15, when the Boston Athletic Association stages the event for the 123rd time.

But scattered among the field of 30,000 that follows will also be people riding handcycles, running on prosthetic legs or conquering other physical impairments in the hopes of a personal best, or the satisfaction of finishing.

"They're coming to our events, and no one knows they're there," said Marla Runyan, a two-time Olympian and five-time Paralympic champion who has led the association's Athletes with Disabilities program for the past two years. "The B.A.A. wants to see people to see them for the athletes that they are."

Starting next year, the organization will award titles — and prize money — in three divisions, recognizing not just the wheelchair racers who have been an official part of the race for four decades but also ambulatory runners who are visually impaired or amputees.

"We wanted to make sure that we were paying attention to this emerging element of the sport," B.A.A. CEO Tom Grilk said.

Runyan, who was the top American woman in Boston when she finished fifth in 2003, has helped create qualification standards for next year's para athlete divisions, and she will invite runners who meet them. The organization is also hosting a U.S. para athletics classification session during marathon weekend. (For example, Cheseto is T62, double below the knee amputation; Runyan, who is legally blind, competed as a T13 against other runners with visual impairments.)

"I think it's been a long time coming," said Adam Popp, who lost part of his right leg to an improvised explosive device while serving with the Air Force in Afghanistan. "There's no other race out there that's going to provide what they do. And now that the ball is rolling, hopefully more people in my situation will get into the sport."

That would be a "happy accident," Runyan said, which could lead more races to include para athlete categories; that, in turn, could encourage more runners with physical impairments to run. Ultimately, Popp would like to see a Paralympic marathon for lower-limb amputees, which hasn't existed since 1996.

"That would be my dream. But that's what I've been waiting for since November of 2015," he said. "I know a lot of other people have been waiting longer."

Popp, who finished the Los Angeles Marathon in 3 hours, 29 minutes, 36 seconds last month on what was supposed to be a Boston training run, said one the biggest obstacles for para athletes is having peers to train with, or run with, or even just to see on the course demonstrating what is possible.

"For people who have been there, that are in the hospital bed and they have started training for their 5K, they really need those peers to look up to and kind of guide the way," Popp said. "I think that what the Boston Marathon is going to do in 2020 is bring in elite level para athletes who can show others who might be coming up through the recovery what's going to be possible."

Some of them, Popp knows, will be among the hundreds who were wounded on Boylston Street in 2013 by two pressure cooker bombs with a design that maximized lower limb injuries, and were horrifically effective.

While the events of 2013 don't motivate the B.A.A., Grilk said, it has made them more aware of a community that looks to the race for inspiration.

"The role of 2013 is that more people are watching," he said. "And if it turns out that what we're doing is favorably received by people who were so adversely affected by what happened to in 2013, then so much the better."