Voters in the Pacific island chain of Bougainville flocked to the polls Saturday at the start of a long-awaited referendum on independence from Papua New Guinea. 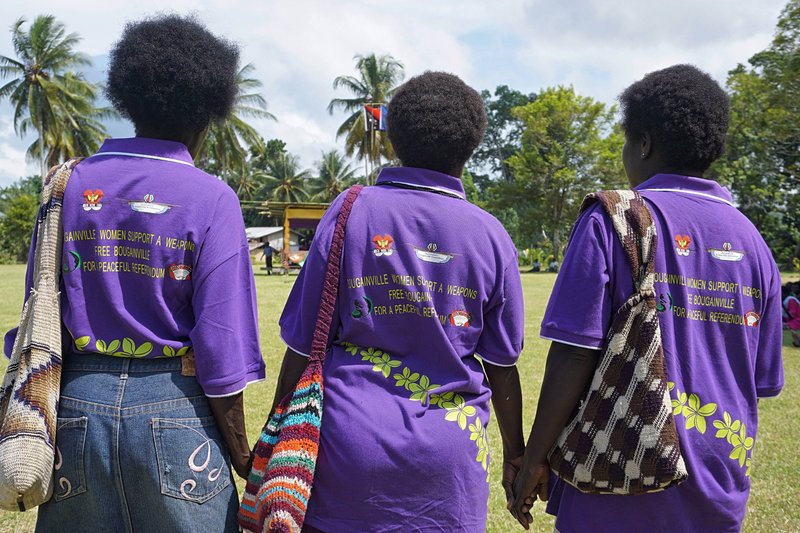 In this April 2018, photo released by United Nations Development Programme, women in the village of Aero, Central Bougainville, come together for a unification ceremony. (Photo: AP)

At least 1,000 people were at a polling station in the main city of Buka when voting began at 8:00 am amid exuberant scenes of singing and dancing that highlighted local excitement over a chance to become the world's newest nation.

Some 207,000 Bougainvilleans are registered to cast ballots over the next two weeks to choose between full independence or simply greater autonomy within Papua New Guinea, a fractious nation of eight million off the northeast coast of Australia.

The vote is a cornerstone of a 2001 peace deal that ended a brutal decade-long war between Bougainville rebels, PNG security forces and foreign mercenaries that killed up to 20,000 people and displaced thousands more.

There are few reliable public opinion polls, so a surprise vote in favour of autonomy within Papua New Guinea is possible, but supporters of full independence are expected to win handily.

Results are due to be released around December 15.

If voters do choose independence, the decision would need ratification from the PNG parliament, where there is anxiety that Bougainville could set a precedent and spur other independence movements within the tribally diverse country.

But rejection would risk rekindling former feuds and skittling the peace process.

Bougainville regional president John Momis cautioned excited voters Saturday that the referendum was only one step in a long process and urged patience.

"We should not rush things, we should take our time to ensure a good outcome," he said, adding that a final result "could be five years" away.

But in a sign of hopeful cooperation with the national government, Momis was accompanied to the polling station by Puka Temu, the PNG minister for Bougainville affairs.

Preparations for the voting were peaceful and across the nation in recent weeks once-sworn enemies have taken part in tearful reconciliation ceremonies, where arrows were snapped to symbolise the end of the conflict.

New Zealand is leading an international unarmed police contingent for the vote, backed by fellow witnesses to the 2001 peace agreement: Australia, Fiji, Solomon Islands and Vanuatu.

Since French explorer Louis de Bougainville arrived on the palm-fringed Melanesian archipelago more than two hundred years ago, control passed in turn from Germany to Australia, Japan and the United Nations before administration was handed over to Port Moresby.

But the territory has historically shared a closer affinity with the neighbouring Solomon Islands than Papua New Guinea.

T-shirts promoting independence -- depicting the distinctive men's amphorae-shaped "upe" headdress, and emblazoned with the words "black is beautiful" in a nod to the ethnic identity of many Bougainvilleans -- were selling fast at the Buka market in the run-up to the referendum.

The 1988-1998 war had its roots in a struggle over revenues from the now-shuttered Panguna copper mine, which at one point accounted for more than 40 percent of Papua New Guinea's exports.

The mine is estimated to still hold more than five million tonnes of copper and 19 million ounces of gold -- worth billions of dollars at current market prices.

Who controls that wealth is likely to be vital in determining whether a newly born Bougainville succeeds.