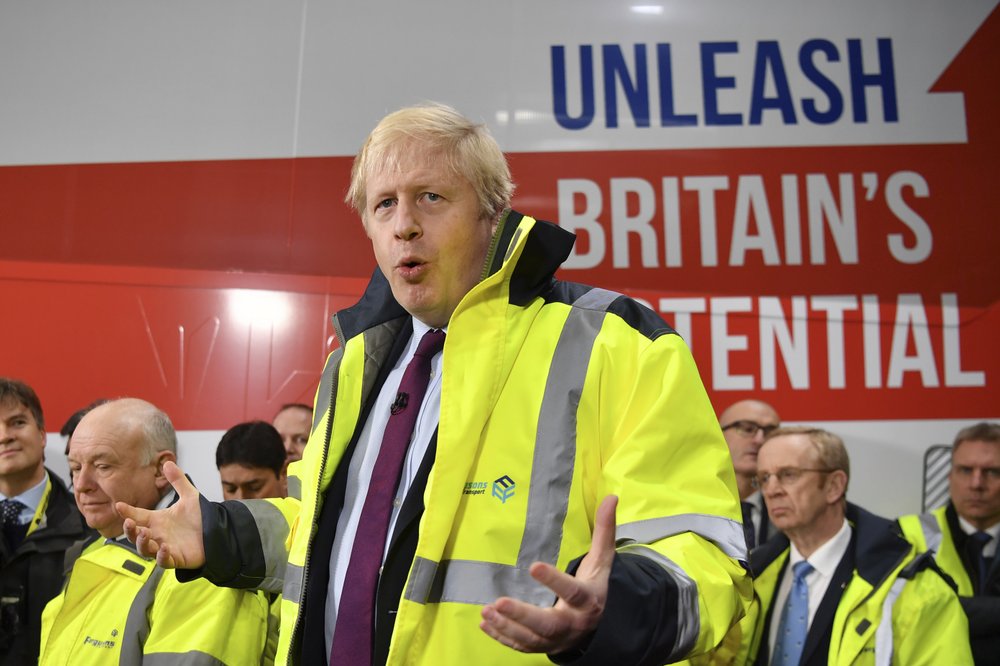 A 4-year-old boy in a Spider-Man top lying on a hospital floor took center stage Monday in Britain’s election campaign, as the opposition painted his plight as a symptom of the country’s ailing health system and branded Prime Minister Boris Johnson heartless for avoiding looking at his photo.

The story of 4-year-old Jack, splashed across the front page of the left-leaning Daily Mirror newspaper, overshadowed campaigning for Thursday’s general vote as Johnson and his Conservatives hunted for crucial votes in traditional Labour Party strongholds.

Labour leader Jeremy Corbyn, meanwhile, toured southwest and central England, where his left-of-center party is trying to cling on to key constituencies.

All 650 seats in the House of Commons seats are up for grabs in this election, which is also expected to break Britain’s political impasse over Brexit and determine its future relationship with the European Union.

Jack’s mother, Sarah Williment, told the Mirror she covered him with coats to keep him warm as he awaited assessment at Leeds General Infirmary last Tuesday. Rushed to hospital amid fears he had pneumonia, Jack was eventually diagnosed with flu and tonsillitis and sent home.

Williment told the newspaper she usually votes Conservative, but will be voting Labour for the first time this week.

Both Labour and Johnson’s Conservatives are pledging to pour funds into Britain’s state-funded National Health Service after years of only modest increases under Conservative governments. Corbyn accuses Johnson of planning to put Britain’s cherished health service “up for sale” in post-Brexit trade negotiations with the United States — a charge that Johnson strongly denies.

It was Johnson’s clumsy reaction to the story that turned it viral. A video of the prime minister briefly declining to look at a photo of Jack had been viewed more than a million times by mid-afternoon Monday.

In the clip of the interview, ITV reporter Joe Pike said to Johnson: “You refuse to look at the photo. You’ve taken my phone and put it in your pocket, prime minister.”

Johnson then took the phone out of his pocket, looked at the photo on the screen, and said: “It’s a terrible, terrible photo. And I apologize obviously to the families and all those who have terrible experiences in the NHS.”

He subsequently returned the phone and apologized for taking it.

Labour Party health spokesman Jonathan Ashworth blamed the situation on Conservative funding cuts and said the prime minister’s initial refusal to look at the photo “is a new low for Boris Johnson. It’s clear he could not care less.”

The spat came as opinion polls give the Conservatives a lead, but as many as one in five voters remain undecided. This election is especially unpredictable because the question of Brexit cuts across traditional party loyalties. Britain is now scheduled to leave the EU on Jan. 31.

Underscoring the significance of those shifting allegiances, Johnson’s first campaign stop was in the eastern port of Grimsby targeting Labour voters who also backed leaving the EU in the U.K.’s 2016 referendum.

Wearing a white jacket, hat, and rubber boots, Johnson lugged a crate of fish across the floor of a fish market in the town that has been ruled by the Labour Party for 74 years. Johnson said he was “taking nothing for granted” in the final days of campaigning. He later swapped his white fish market garb for a bright yellow high-visibility jacket as he campaigned in northeast England.

The Conservatives had a minority government before Thursday’s election. Johnson pushed for the vote, which is taking place more than two years early, in hopes of winning a majority of seats in the House of Commons and breaking Britain’s political impasse over Brexit. He says if the Conservatives win a majority, he will get Parliament to ratify his Brexit divorce deal and take the U.K. out of the EU by Jan. 31.

Labour is promising to renegotiate the divorce deal, then give voters the choice in a referendum of leaving the EU on those terms or remaining in the bloc.

Speaking in London, Labour Party official John McDonnell outlined what a Labour government would do in its first 100 days if elected — including making good on election pledges to nationalize public utilities and launch a “green industrial revolution” to tackle climate change. He also said the party would hammer out a new Brexit deal to be put to a second referendum.

“Despite all his promises, it is clear to all now that far from getting Brexit done, under Johnson, Brexit won’t be done for years or we risk a catastrophic no deal,” McDonnell said.