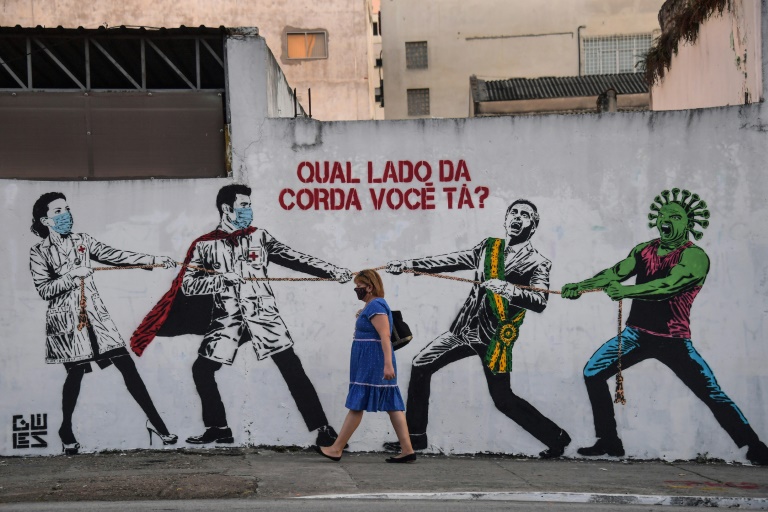 The cut -- by three-quarters of a percentage point, to 2.25 percent -- was in-line with forecasts.

It was the eighth straight cut to the Selic rate.

Brazil's economy is reeling as the country has become one of the worst flashpoints in the pandemic, with the second-highest number of cases and deaths worldwide, after the United States.

The World Bank is forecasting a contraction of eight percent this year for Latin America's biggest economy, which would be its worst annual recession on record.

With coronavirus infections still rising rapidly in Brazil, economists are skeptical the latest rate cut will staunch the losses caused by months of coronavirus stay-at-home orders and business closures.

In practice, despite the series of cuts to the Selic, commercial lending rates remain high -- often higher than before the pandemic -- reflecting the risk premium charged by banks fearing a flurry of bankruptcies.

The central bank's governors "need to sit down and think about why the usual monetary policy models aren't working," said Jason Vieira of Infinity Assets.

The uncertain environment has been compounded by messy politics, as Brazil has struggled to set a strategy for dealing with the virus.

President Jair Bolsonaro, who has famously compared the virus to a "little flu," has clashed with state and local authorities over how to contain it.

The far-right leader argues the economic impact of stay-at-home measures risks being worse than the virus itself, and has instead touted the drugs chloroquine and hydroxychloroquine as treatments, despite uncertainty about their effectiveness against COVID-19.

"That political noise is having a very bad influence" on investors, said Mauro Rochlin, an economics professor at the Getulio Vargas Foundation.

Long haunted by high inflation, Brazil has now registered two straight months of deflation, likely giving the central bank more room to cut rates in hopes of boosting the economy without having to fear a surge in prices.

The bank said its next moves would depend on "the impact of the pandemic" and any stimulus measures taken by the government.