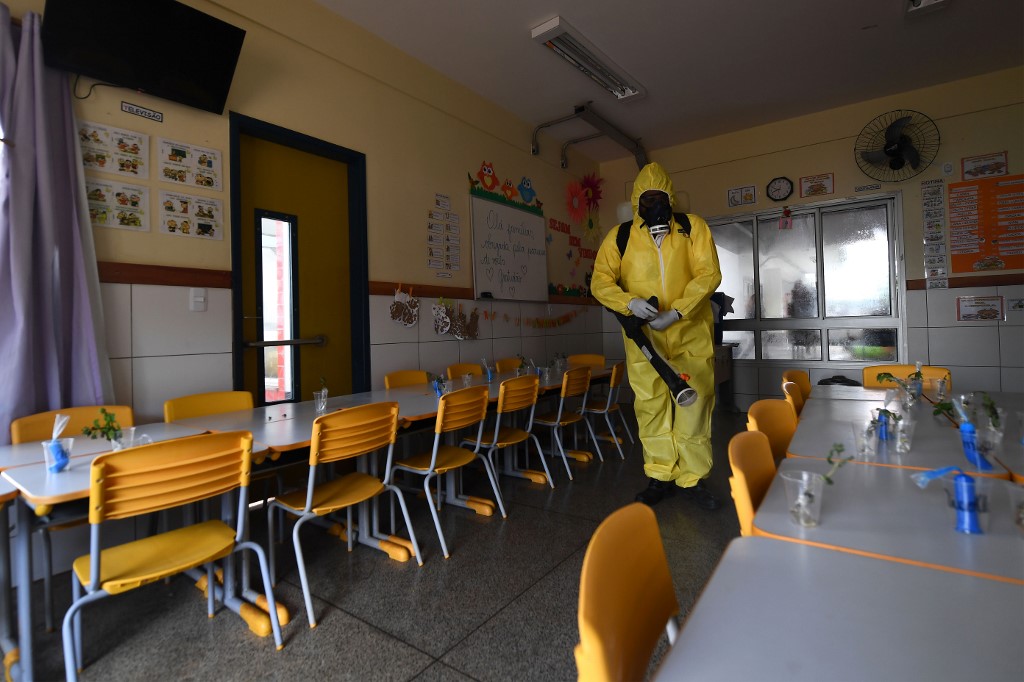 A Federal District's employee disinfects a public school as a measure against the spread of the new coronavirus in Brasilia, on August 5, 2020. (Photo: AFP)

The bank lowered the Selic rate by a quarter-point, to two percent, and left the door open to one more "small" cut in an easing cycle that has steadily lowered it from 6.5 percent in June 2019.

It was the ninth consecutive cut, and came as Brazil reeled from the impact of the coronavirus, which has caused more infections and deaths in the country than any other except the United States: more than 2.8 million and 97,000, respectively.

The pandemic has taken a heavy toll on Brazil's economy, which contracted 1.5 percent in the first quarter and is set to shrink by 5.7 percent this year, according to analysts polled by the central bank.

The bank is seeking to give the economy a boost by cutting the interest rate, but indicated it was concerned that too many cuts would fuel excessive inflation and financial instability.

Recent indicators "suggest a partial recovery" of the Brazilian economy, the bank said in its accompanying statement.

The bank's monetary policy committee "understands the current economic climate still requires extraordinarily elevated monetary stimulus, but also recognizes... the remaining room to use monetary policy, if it exists, is small," it said.

Brazil's inflation rate is forecast to come in at 1.63 percent for the year, well below the bank's target range of 2.5 to 5.5 percent.

The Brazilian economy is meanwhile showing tentative signs of a rebound from the worst of the pandemic.

Industrial output grew 17.9 percent from May to June -- but is still down 13.5 percent since March.