Critics of Brazilian President Jair Bolsonaro are again speaking out against the leader’s stance on the coronavirus pandemic, this time rejecting his view that vaccination for the virus shouldn’t be mandatory. 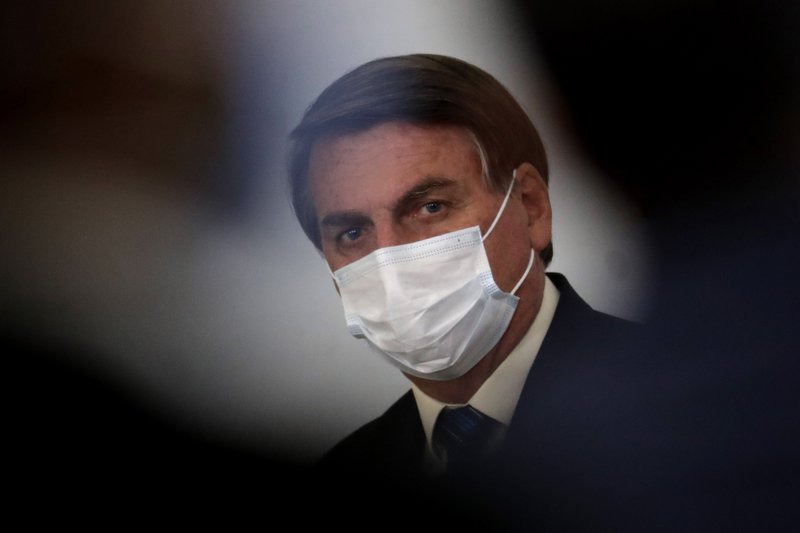 Brazil's President Jair Bolsonaro wearing a mask attends a ceremony about the extension of emergency aid to help the poor population affected by the COVID-19 pandemic, at the Planalto Presidential Palace, in Brasilia, Brazil, Tuesday, Sept. 1, 2020. (Photo: AP)

Bolsonaro’s first such comments came Monday, when he told a supporter, “No one can force anyone to get a vaccine.” He repeated it Thursday night during a live broadcast on Facebook, adding his opposition to administering vaccines that are yet to be proven on Brazilian soil.

“It has been proven in other countries, but not here in Brazil,” he said, without specifying to which potential vaccine he was referring. “We cannot be irresponsible and put a vaccine into people’s bodies. As I said, nobody can oblige someone to take a vacccine.”

The comments were swiftly rebuked by opponents on social media.

Sao Paulo state Gov. João Doria, a former Bolsonaro ally turned foe, said in an interview with The Associated Press on Friday that immunization cannot be viewed as a personal decision. Sao Paulo, with 46 million residents, is the pandemic’s epicenter in Brazil, with its more than 30,000 dead from COVID-19 accounting for about a fourth of the country's death toll from the illness.

“It is sad that once again Brazil’s president is setting a denialist example,” Doria said in a video call. “It should be obligatory, except in special cases or under health circumstances that justify not taking a vaccine. An infected person infects others, and makes possible the death of others.”

Brazil’s Workers’ Party, an adversary of both Bolsonaro and Doria, said in a statement that the president's efforts to create an air of doubt about a future vaccine “ignores the importance of the shots to protect the health of the entire population.”

The national health council, which is a branch of Bolsonaro's own health ministry, said in a statement that the government should not be talking about vaccination against COVID-19 not being mandatory.

“The right to individual liberty is not absolute to the point of being above the collective well-being,” the council said.

Since the onset of the crisis, Bolsonaro has set himself against lockdowns and other broad restrictions on activity imposed by governors at the recommendation of health experts. The president called COVID-19 “a little flu,” and warned that shutting down the economy would inflict a greater hardship on the millions who live hand to mouth.

Brazil’s health ministry to date has confirmed more than 4 million cases of the disease and 125,000 deaths. Both numbers trail only the United States, according to the tally kept by Johns Hopkins University.

Because Brazil’s caseload is so high, and it has a large, dispersed population of 210 million people, several vaccine developers selected the nation to conduct human trials of their products.

Bolsonaro’s federal government struck an initial deal with AstraZeneca for 30 million doses of its vaccine, which could later rise to 100 million in total.

Doria said Bolsonaro’s move to stir skepticism about foreign-made vaccines is a mistake.

“With one vaccine we cannot immunize the entire Brazilian population. We need two, three, maybe four, produced in large scale,” the governor said. “As long as it is proven to be efficient, it doesn’t matter if it is Chinese, Russian, French, American or British. What matters is that it saves lives.”

A recent poll by Ipsos Institute in 27 countries published Wednesday found 88% of Brazilians surveyed said they would get immunized against COVID-19 if a vaccine was available.

Brazil's health ministry expects the distribution of vaccines can start in the first months of 2021.

“What is important is that people take the vaccine because they understand that it brings a benefit to them,” he said. “And this is the vaccine’s purpose.”