WORLD Brazil mourns as nation’s history goes up in flames

Brazil mourns as nation’s history goes up in flames 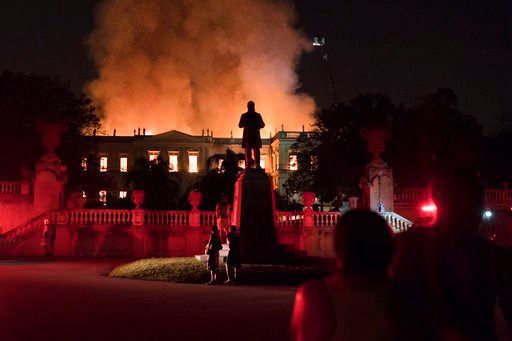 Firefighters worked through the night to put out a fire at the 200-year-old National Museum of Brazil, in Rio de Janeiro, Sunday, September. 2, 2018. (Photo: AP)

Rio de Janeiro (People’s Daily)  - A fire swept through the National Museum in Rio de Janeiro, Brazil yesterday evening, engulfing what was arguably the most important historical collection throughout the South American continent.

The fire broke at around 7:30 pm shortly after the museum had closed. By morning, 50 firefighters were still on the scene.

Museum officials have already said the loss is immeasurable and would impossible to calculate.

First established in 1818, the museum was home to over 200 years of Brazilian natural and cultural history.

Eyewitnesses over one mile away said they could see smoke and flames coming from the building.

The museum recently celebrated its 200th anniversary as one of the largest natural history museums in Latin America.

Fire Department spokesman Roberto Robbadi said 80 firemen were dispatched to the scene and by midnight the fire was under control.

No fatalities or serious injuries were reported.

Although not a large museum in size, the collection was rich and vast. It was home to country’s oldest human fossil, a female skull and over five tons of meteorites, including the largest one ever found in Brazil.

Early on firefighters realized they did not have enough water. After they discovered two nearby fire hydrants were dry fire department officials called in a water tanker to extract water from a nearby lake to help extinguish the blaze.

Robbadi explained that because the museum was an old building with plenty of flammable material, such as aged wood and books, the blaze was able to spread faster than normal.

The cause of the fire remains unclear.

Established as the Royal Museum by King Joao of Portugal, it housed the first major collection of plants and animals, and especially birds meant for scientific research.

The museum moved in 1892 to its current location, San Christovao Palace. It was home to both Portuguese and Brazilian royalty. In 1938 it was listed a national heritage site.

Over the years the museum has been strapped financially due to a lack of adequate funding. One museum official explained said they had just settled on a budget agreement with the Brazilian National Economic and Social Development Bank that included fire prevention measures.