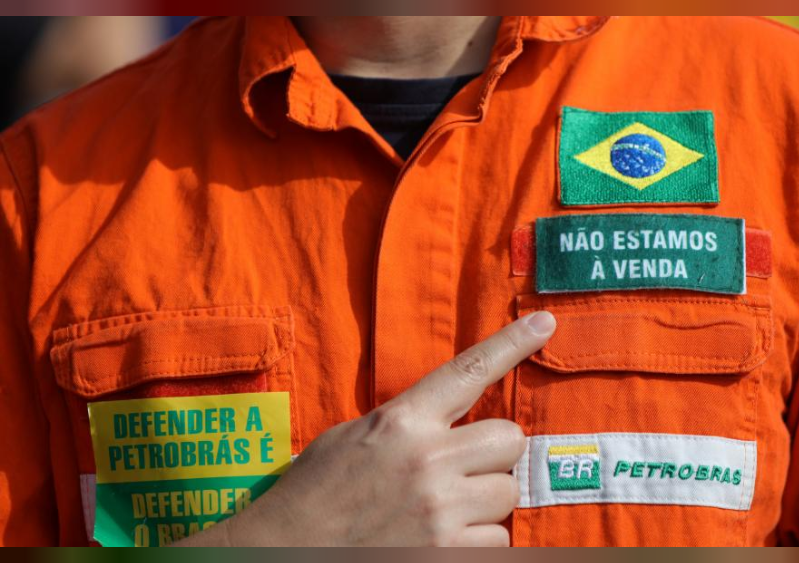 An oil worker points to a patch on his shirt that reads: "We are not for sale", near the entrance to Petrobras Alberto Pasqualini Refinery, in Canoas, Brazil May 30, 2018. (Photo: Reuters)

Brazilian oil workers began a 72-hour strike on Wednesday in a new blow to President Michel Temer following a nationwide trucker protest that has strangled Latin America’s largest economy for over a week.

Late on Tuesday, Reuters reported that Temer was considering an overhaul of a market-based fuel pricing policy at Petrobras, which could provoke even more investor flight. Temer’s office said in a Wednesday morning statement that he would preserve the policy.

The oil sector strike included workers on at least 20 oil rigs in the lucrative Campos basin of 46 operated by Petrobras, as the company is known, according to FUP, Brazil’s largest oil workers union. Petrobras said any disruption would not have an immediate major impact on its production or overall operations.

The oil strike was declared illegal by Brazil’s top labor court on Tuesday, after Petrobras argued it was about politics rather labor issues. FUP said it had not been informed of the ruling.

According to a source close to the company, Petrobras has a significant stock of fuel on hand, especially as a 10-day protest by truckers prevented significant amounts of fuel from leaving refineries.

However, the strike has raised the specter of protests spreading to more sectors as Brazilians vent frustration with an unpopular government and an uneven economic recovery.

The truckers’ highway blockades and resulting fuel shortages have already halted major industries and hammered exports of everything from beef and soybeans to coffee and cars.

FUP said on Wednesday that workers did not show up at work at eight refineries stretching from Manaus in the Amazon to Rio de Janeiro in the southeast. They also walked off the job at plants handling lubricants, nitrogen and shale gas, as well as in the ports of Suape and Paranaguá.

“Initial information points to the workers having adhered to the strike at various locations,” FUP said in a statement. “The movement is continuing through the morning, when stoppages at other Petrobras units are expected.”