WORLD Brazil on the cusp of sharp move right with Bolsonaro

Brazil on the cusp of sharp move right with Bolsonaro 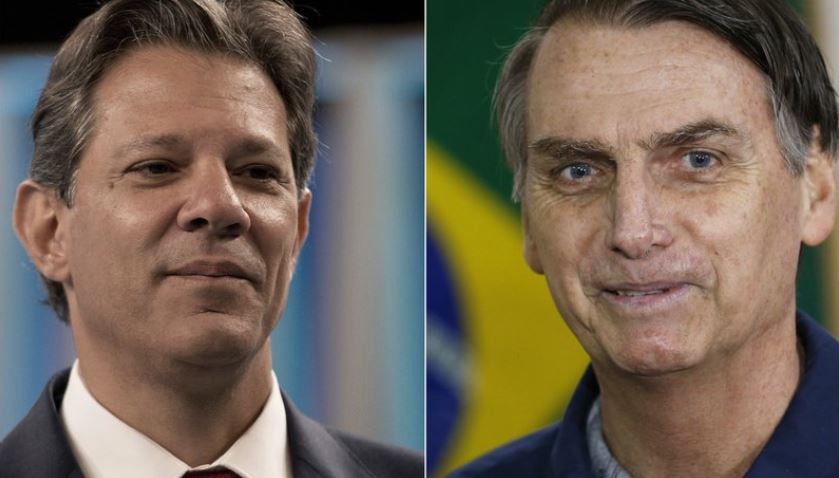 This photo combo of Workers’ Party Presidential candidate Fernando Haddad shot on Oct. 4, left, and an Oct. 7, 2018 photo of Jair Bolsonaro, of the Social Liberal Party, shows the two candidates that will face off in a second-round vote in Brazil. (Photo: AP/Silvia Izquierdo)

Brazilians appear on the cusp of handing the presidency to a brash former army captain who has reminisced fondly about dictatorship, pledged to jail corrupt politicians and promised an all-out war on the drugs and crime that plague South America’s largest nation.

Far-right congressman Jair Bolsonaro just missed outright victory in Sunday’s vote, and will face former Sao Paulo Mayor Fernando Haddad of the leftist Workers’ Party in an Oct. 28 runoff. Bolsonaro only needs a few more points to secure victory, but Haddad’s supporters vowed Monday to launch a tough fight to make up ground after he finished a distant second in the first round.

The election was a seismic shift for this nation of more than 200 million people, where the left has won the past four elections but deep divisions have opened in the wake of a massive corruption scandal and the impeachment of a president. Brazil’s move fits into a global trend among voters — in the United States and Europe, among other places — who are choosing anti-establishment and often far-right populist candidates who target minorities and promise a return to “traditional values.”

Brazil’s direction both economically and politically will have a major impact on surrounding countries that are trade partners with the regional heavyweight. It will especially have influence on one of the thorniest issues in the region, Venezuela’s economic and social collapse. Bolsonaro has promised a harder line on Venezuela, which millions have fled in recent years.

Bolsonaro’s Social and Liberal Party was a tiny, fringe group, but the candidate began surging in the polls earlier this year through his use of social media and carefully orchestrated rallies. Bolsonaro has often praised Donald Trump, and his campaign took many pages from the U.S. president’s playbook, from bashing the mainstream media and political class to using the candidate’s adult children as proxies.

Bolsonaro’s party took a whopping 52 seats in the lower house of Congress — up from just one in the last election — giving it 10 percent of that house and making it the second-largest party after the Workers’ Party, with 56.

Brian Winter, the editor-in-chief of Americas Quarterly magazine, said the results underscored “the total disappearance of the Brazilian center” and that Bolsonaro seemed almost certain to glide to victory.

Haddad may yet gain the backing of other candidates in the race, but that might just feed Bolsonaro’s criticism that traditional politicians are only interested in protecting their own. The Workers’ Party took to Twitter on Monday with a rallying cry to all those who believe in democracy and vowed to unify the country. But the leftist candidate will struggle to build a broad coalition in such a polarized race.

“If you don’t speak to people’s anger, you’re not going to get any votes,” Winter said.

Brazilians have a lot to be angry about. Since 2014, they’ve watched slack-jawed as prosecutors detailed how many in government manipulated public contracts and promised favors in exchange for billions of dollars in kickbacks and bribes. Much of that focused on the Workers’ Party, and many voters cited a desire to root out corruption in their choice of Bolsonaro.

Jana Tessarolo Clemente, a 46-year-old veterinarian from Sao Paulo said she voted for the former army captain “because we’re against the Workers’ Party more than for Bolsonaro.”

“Anyone who lives in Brazil knows that life got worse under the Workers’ Party, especially for the middle class,” she said.

Brazil has also just emerged from a protracted recession, unemployment is high and crime is rising.

Bolsonaro, whose campaign was called “Brazil above all, God above everyone,” has pushed a nostalgic narrative that he can bring back better times. Part of that includes likely attempts to roll back the rights of gays and other minorities, and a hard line on issues like equal pay for women. Bolsonaro has said he would rather have a dead son than a gay one and told a fellow lawmaker in Congress that she was “too ugly” to be raped.

To fight the country’s rampant crime, he has promised to give police a free hand to shoot first and ask questions later, arguing that criminals will be the ones who are scared in his administration. He has vowed to loosen gun laws to allow more people to arm themselves. He has proposed mass privatizations of state companies, a smaller government that spends less and a more open economy.

His promises to give police freer rein, his criticism of the social movements and reforms that have attempted to make Brazil more inclusive and equal, and his frequent praise for Brazil’s 1964-1985 military dictatorship have raised concerns that a Bolsonaro government will erode democratic values and rule with an authoritarian hand. He has also indicated that he will surround himself with former military officers, like his running mate who is a retired general.

Many Brazilians fear that the most immediate impact might be a significant rise in police violence in a country where police already have a reputation as deadly.

Bolsonaro was expected to come out in front on Sunday, but he far outperformed predictions, blazing past competitors with more financing, the institutional backing of traditional parties and much more free air time on television. His first-place finish with 46 percent of the vote — just short of the 50 percent-plus needed for an outright win — came after an unpredictable campaign in which the front-runner, former President Luiz Inacio da Silva, was barred from running after being jailed on a corruption conviction. Bolsonaro himself was stabbed and forced to campaign from a hospital bed for several weeks.

For voters, Bolsonaro and Haddad, who got 29 percent of the vote, represent starkly different visions for the future.

Bolsonaro has painted a nation in collapse, where drug traffickers and politicians steal with equal impunity, and moral rot has set in. Meanwhile, Haddad has portrayed an unequal society hijacked by an elite that can’t bear to see the lives of poor people improve. He has promised to fight long-standing inequalities, scrap a major labor reform passed last year and invest more in education.

Haddad has also spent much time arguing that da Silva, his mentor, was unfairly jailed — a strategy aimed at attracting voters who still feel strong affection for da Silva, known in Brazil simply as Lula. But he has struggled to shake many voters’ anger at the Workers’ Party for its role in the corruption scandal.

Many voters, already disillusioned with their democracy, said they felt trapped by the choice between the two front-runners, a sentiment likely to deepen in the weeks to come.

Andrea Martins, a 46-year-old lawyer and instructor in labor law, wasn’t able to vote Sunday because she doesn’t live where she is registered. But she says she would have pressed the button for “Bolsonaro with pain in my heart” since she is so disillusioned with the Workers’ Party.

“I think we need a miracle,” she said. “A miracle would be for Bolsonaro to see the light and govern the country for the people, for him to become less radical.”