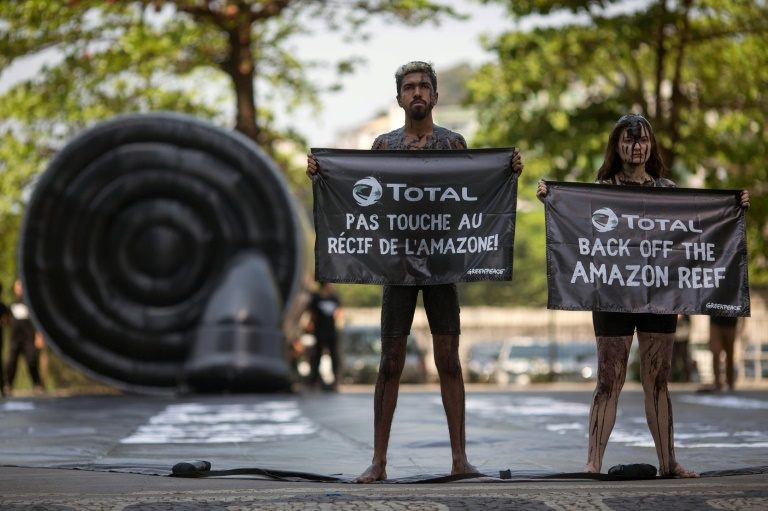 Greenpeace activists stage a protest in Rio de Janeiro against Total's planned oil exploration near a huge coral reef off the coast of Brazil. (Photo: AFP)

A Brazilian prosecutor warned of "ecocide" in recommending against a drilling license for French oil major Total close to a huge coral reef near the mouth of the Amazon River.

The prosecutor's office for Amapa state said "the only way to guarantee avoiding environmental damage to the area is to deny the license."

"Authorizing oil drilling activity without adequate studies violates the international obligations that Brazil has signed," the prosecutor's office said late Wednesday, warning of "large-scale environmental destruction that would amount to ecocide and a crime against humanity."

The recommendation was sent to the government environmental agency Ibama, which has 10 days to respond.

On Tuesday, environmental campaigners Greenpeace said that a previously discovered coral reef had been found to extend right into where Total plans to drill.

The enormous reef was found in 2016, but is only now said to overlap directly with Total's blocks, 75 miles (120 km) off the Brazilian coast, the group said.

The finding, made during a research expedition, invalidates Total's environmental impact assessment, which is based on the reefs being located at least five miles (eight kilometers) from drilling, Greenpeace said.

In 2013, Total joined BP and Brazil's Petrobras to buy the exploration blocks near the mouth of the Amazon. But they have yet to secure the go-ahead from Brazilian environmental authorities to start drilling.

In August, the regulator Ibama told Total it would have to provide additional information.