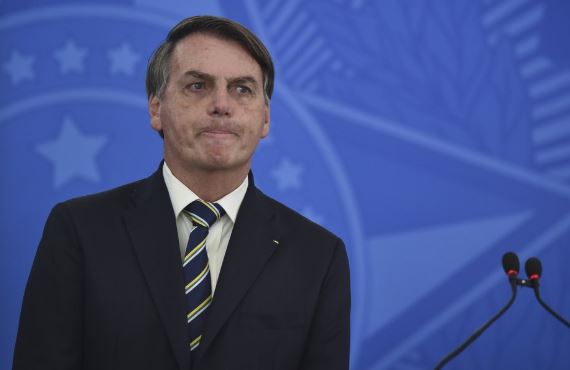 Even as coronavirus cases mount in Latin America’s largest nation, Brazilian President Jair Bolsonaro has staked out the most deliberately dismissive position of any major world leader, calling the pandemic a momentary, minor problem and saying strong measures to contain it are unnecessary.

Bolsonaro says his response to the disease matches that of President Donald Trump in the US, but the Brazilian leader has gone further, labeling the virus as “a little flu” and saying state governors’ aggressive measures to halt the disease were crimes.

On Thursday, Bolsonaro told reporters in the capital, Brasilia, that he feels Brazilians’ natural immunity will protect the nation.

“The Brazilian needs to be studied. He doesn’t catch anything. You see a guy jumping into sewage, diving in, right? Nothing happens to him. I think a lot of people were already infected in Brazil, weeks or months ago, and they already have the antibodies that help it not proliferate,” Bolsonaro said. “I’m hopeful that’s really a reality.”

A video titled “Brazil Cannot Stop” that circulated on social media drew a rebuke from Monica de Bolle, a Brazilian senior fellow at the Peterson Institute for International Economics.

“Do you know what will happen, Bolsonaro? Brazil WILL stop. Your irresponsibility will bring thousands to avoidable deaths,” she tweeted Friday. “The destroyed lungs of these people, as well as the organs of those who won’t be able to have medical care, will fall on your lap. And Brazil will not spare you.”

Does Bolsonaro actually believe, as he says, that the virus will be vanquished by a cocktail of drugs and Brazil’s tropical climate? It’s possible, but analysts say a more calculated political gamble may underlie his increasingly defiant position.

Bolsonaro may have concluded that when he faces reelection in two and a half years, the economy will matter more to most Brazilians than the death toll from coronavirus. By labeling the virus threat as overblown and decrying state governors’ quarantines and shutdowns as unnecessary, he could be preparing to blame others for any recession that might happen.

“If things go really poorly from an economic point of view, he can point his finger at the governors,” Christopher Garman, managing director for the Americas at political risk consultancy Eurasia Group, said by phone. “What he isn’t calculating is the public opinion hit that he can take for being seen to have not handled well the public health crisis.”

The governors of Sao Paulo and Rio de Janeiro, the states hardest hit by the virus, have banned public gatherings, closed schools and businesses and called for strict social distancing. Both are Bolsonaro critics and possible contenders in the 2022 presidential race. They also have backup: 25 of Brazil’s 27 governors signed a joint letter this week begging Bolsonaro to back strict anti-virus measures.