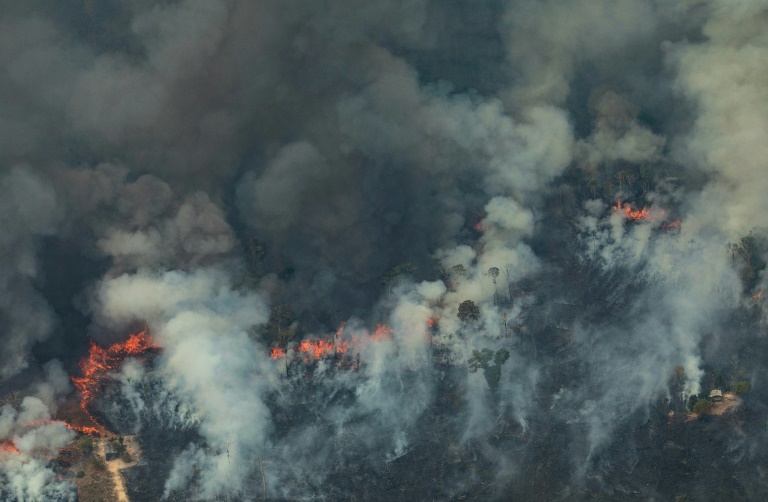 Handout aerial picture released by Greenpeace showing smoke billowing from forest fires in the municipality of Candeias do Jamari, close to Porto Velho in Rondonia State, in the Amazon basin in northwestern Brazil, on August 24, 2019. (Photo: AFP)

Brazil's President Jair Bolsonaro said Tuesday he was open to discussing G7 aid for fighting fires devastating the Amazon rainforest -- only if his French counterpart Emmanuel Macron "withdraws insults" made against him.

Bolsonaro's remarks come amid an escalating war of words with Macron over the worst fires in years that have sparked a global outcry and threatened to torpedo a huge trade deal between the European Union and South American countries.

US President Donald Trump stepped up to defend Bolsonaro's response to the blazes, tweeting on Tuesday that he was "doing a great job" and pledging "full and complete" US support.

A top Brazilian official had earlier rejected the G7 countries' offer of $20 million to combat the fires devastating the forest in Brazil and Bolivia, saying Macron should take care of "his home and his colonies."

"Mr Macron must withdraw the insults he made against me," Bolsonaro told reporters in the capital Brasilia.

"To talk or accept anything from France, with the best possible intentions, he has to withdraw these words, and from there we can talk."

Macron and Bolsonaro have repeatedly locked horns in the past week, with the French leader accusing Bolsonaro of lying to him about his commitments on climate change and vowing to block the EU-Mercosur trade deal involving Brazil that took decades to negotiate.

On Monday, Macron rebuked "extraordinarily rude" Bolsonaro after the Brazilian leader personally expressed approval online for a Facebook post implying that Brigitte Macron was not as attractive as his own first lady, Michelle Bolsonaro.

Bolsonaro has hit back, accusing Macron of treating Brazil like "a colony or no-man's land."

The latest official figures show 1,659 new fires were started in Brazil between Sunday and Monday, taking the total this year to 82,285 -- the highest since at least 2013 -- even as military aircraft and troops help battle the blazes.

More than half of the fires are in the massive Amazon basin.

Bolsonaro -- a climate-change skeptic -- has faced criticism at home over his delayed response to the fires and thousands have protested in Brazil in recent days to denounce the destruction.

Bestselling Brazilian writer Paulo Coelho took to the internet to apologize -- in French -- for Bolsonaro's behavior.

"As Amazonia burns, they have no argument except to insult, deny, say anything to avoid taking responsibility," he added.

But Trump tweeted that the Brazilian leader was "working very hard on the Amazon fires and in all respects doing a great job for the people of Brazil - Not easy."

In the hard-hit northwestern state of Rondonia, thick smoke has choked the capital Porto Velho in recent days as fires blacken swaths of the rainforest.

Defense Minister Fernando Azevedo e Silva on Monday claimed that the fires were "under control."

"It has been exaggerated a little that the situation was out of control -- it wasn't," he said. "The situation isn't simple but it is under control."

Nearly 2,500 troops and 15 aircraft, including two C-130 Hercules, have been deployed, according to the defense ministry, which has published satellite data it says show a reduction in the number of fires in the nine states spanning the Amazon.

More than 43,000 troops were available to help put out fires, the government said previously.

Experts say increased land clearing during the months-long dry season to make way for crops or grazing has aggravated the recurring problem this year.

Although about 60 percent of the Amazon is in Brazil, the vast forest also spreads over parts of eight other countries or territories, including the French overseas territory of Guiana on the continent's northeast coast.

Bolivia suspended election campaigning on Monday to deal with the voracious fires that have devastated more than 9,500 square kilometers (3,600 square miles) of forest and grassland.