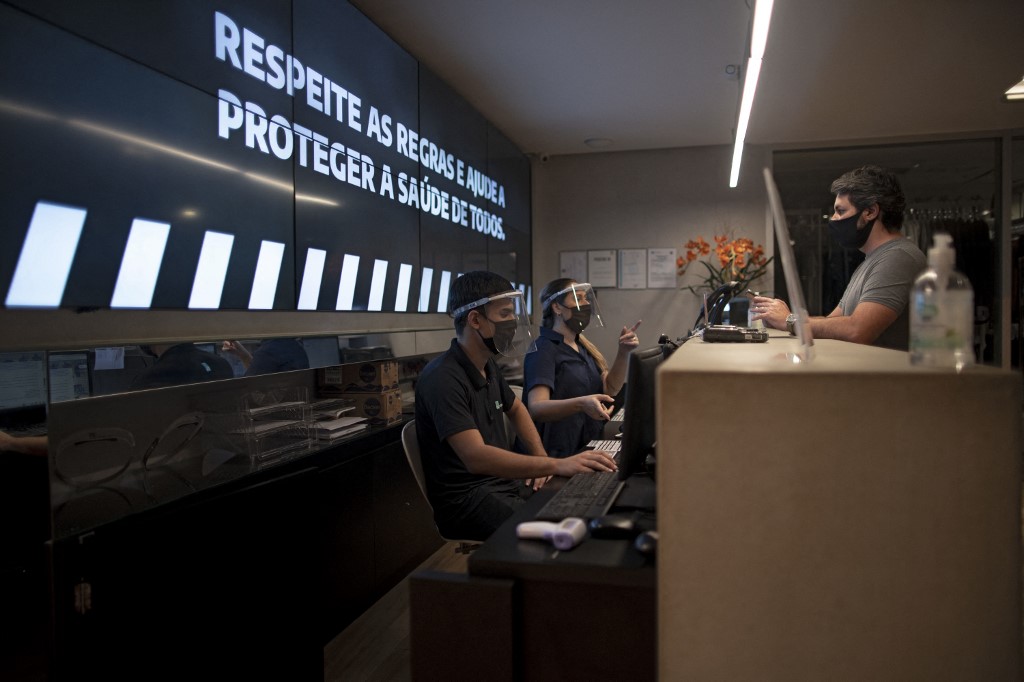 Receptionists wear face masks and shields in front of a sign reading “Respect the rules and help protect everybody's health” at the entrance of a gym in Rio de Janeiro, Brazil, on July 2, 2020. (Photo: AFP)

A total of 10,030,626 people have tested positive since the South American country confirmed its first COVID-19 case last February, representing the world's third-largest outbreak after the United States and India.

Additionally, Brazil reported 1,367 COVID-19-related deaths, taking its death toll to 243,457, only second to the United States in total fatalities.

The country's most populous state Sao Paulo is the hardest hit, with 1,949,459 cases and 57,240 deaths, according to the ministry.

Brazil is experiencing a second wave of rising infections and deaths since December. Specialists warned of further surges as a new and more contagious variant, called P1, was recently identified in Manaus, capital of the northern Brazilian state of Amazonas.

Northeastern states such as Bahia and Ceara imposed a two-week night curfew this week and banned non-essential activities to prevent overwhelming the local healthcare systems.

The federal government will deliever 100 million doses of CoronaVac vaccines it recently ordered from the Butantan Institute of Sao Paulo to states by September, Health Minister Eduardo Pazuello told state governors at a virtual meeting on Wednesday.

The minister promised to deliver more than 230.7 million doses of COVID-19 vaccines by July, according to a schedule he presented at the meeting.

The federal government said that everyone over 90 years of age has been vaccinated, local media reported Thursday citing an official document issued at the request of Brazil's Supreme Court.