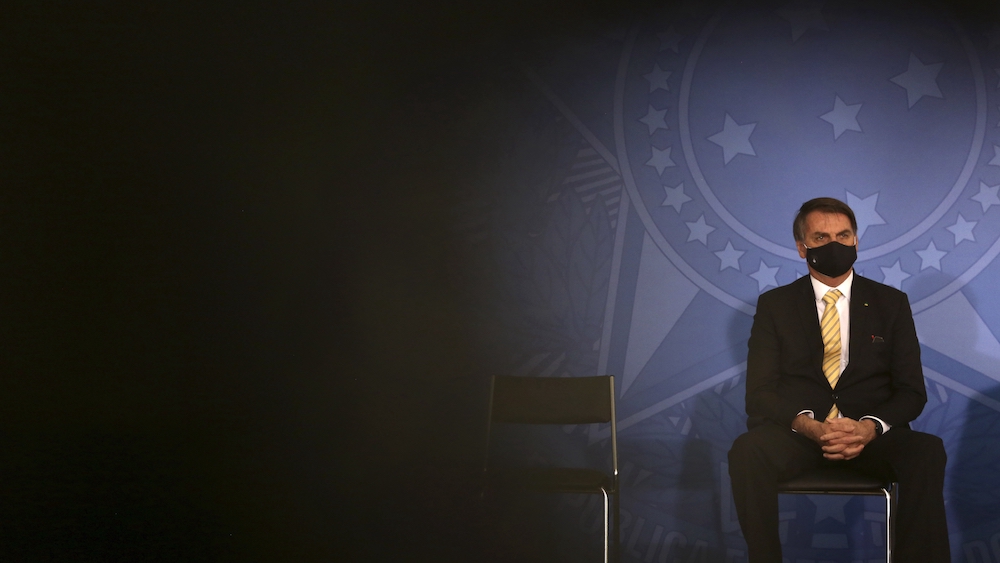 Brazil has kicked political drama to the curb. Between scandals, powerplay episodes, and a slew of surprising statements, the South American country has been a mainstay in news headlines recently. But now, COVID-19 is hogging the spotlight.

The virus is running rampant, causing over 27,900 deaths in Brazil. There's no health minister to take the lead in epidemic control efforts and a wave of resignations at the Health Ministry was followed by nominations of military officials to fill the gap. Now, questions are being raised about what this new arrangement means for a country that was controlled by the military for 21 years.

Since the virus hit the country, Justice Minister Sérgio Moro, the crown jewel of the government, resigned and accused the president of political interference. Culture Secretary Regina Duarte also left her post after a controversial TV interview downplaying the coronavirus deaths.

In between, two health ministers, Henrique Mandetta and Nelson Teich, have left their post, the latter just one month into the job. No replacement has been appointed. General Eduardo Pazuello is now acting interim minister, and President Jair Bolsonaro says he's not in a rush to appoint someone else, going back on initial plans to nominate another military official.

Militarization of the Health Ministry

After the designation of General Pazuello, other nominations from the military followed. The ministry now has 20 military officials and only one is a doctor. According to the newspaper O Estado de São Paulo, 20 more will be appointed to strategic positions.

Epidemiologist Wanderson Oliveira is the latest loss as he announced on May 23 that he, too, was resigning. This leaves the ministry without its biggest professional and technical reference – Oliveira had planned the pandemic response.

The increasing number of military officials in the administration and government ranks is nothing new. In February 2019, the president had 103 military personnel across ministries.

Officials can't deny the president's summoning for work because of hierarchy.

Between 1964 and 1985 Brazil was ruled by an authoritarian military government, so the ascension of so many officials to the administration has created anxiety in several sectors. 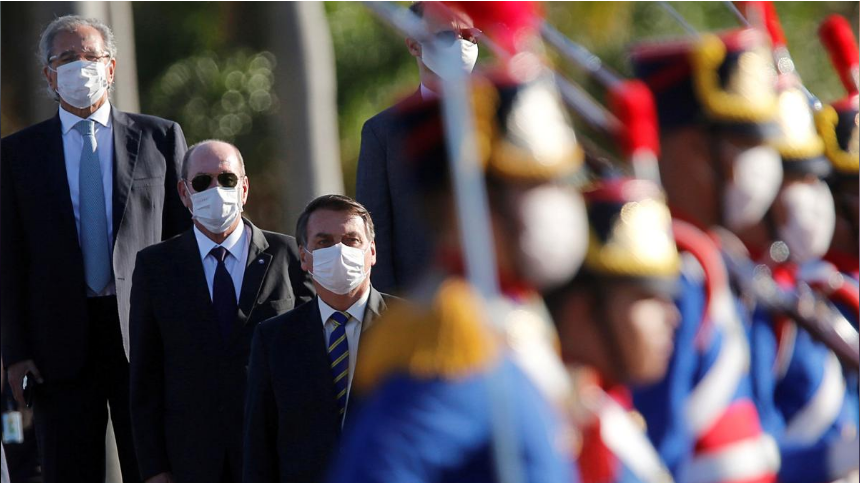 Brazil's president and other ministers attend a national flag hoisting ceremony in front the Alvorada Palace, amid the COVID-19 outbreak. (Photo: CGTN)

"The high number of military officers is a result of the lack of support from other sectors that helped elect and used to support the president," Prof. Graziella Tiesta from the School of Public Policy and Government of Getulio Vargas Foundation in Brazil told CGTN Digital by email.

Asked if the nominations could work against the pandemic fight, Tiesta said they are not the problem. "The problem is the lack of scientific basis of the political decisions and the lack of ability of Bolsonaro to govern."

"The interim minister (Pazuello) has no party affiliation and has not been elected; he only has to respond to the president. We can expect that it is exactly what he will do," the researcher added.

On a similar note, Prof. Zhou Zhiwei from the Chinese Academy of Social Sciences (CASS) told CGTN Digital that the move "shows the interim minister has similar attitude and opinions on the health crisis" as the president.

The position of the military when it comes to Bolsonaro is "not very clear," but Zhou considers that the institution should be very careful because the majority of people don't accept the return of a military regime.

Prof. Zhou noted that "the military has a strong influence in every key ministry" because of ruptured relations with the Social Liberal Party (PSL) in 2019, which limited even more Bolsonaro's space in the Brazilian multi-party system.

"Because traditional parties don't agree with the ideas and policy orientation of Bolsonaro," the current government relies mostly on the military and "Centrão" – an informal Chamber of Deputies group without an ideology but an ally of the government when it suits its interests.

"The relation between the president and the congress and the courts is becoming more intense, because of his negative response to the pandemic and irresponsible behaviors, so the support of the military is crucial to the stability of his administration," Zhou explained. 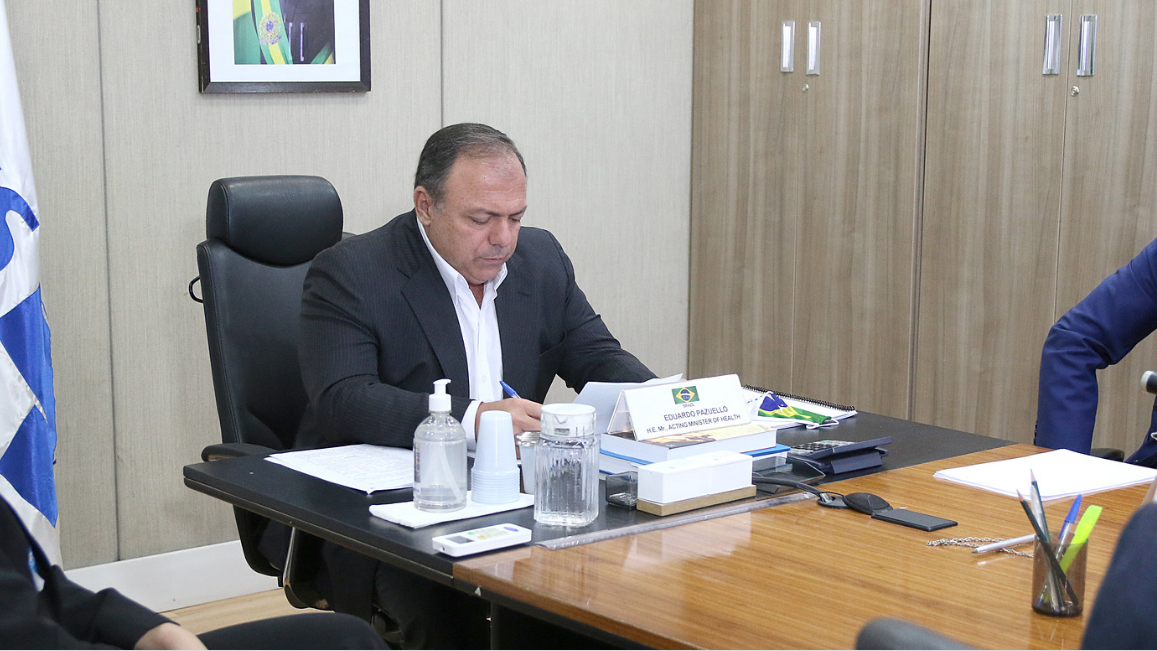 As Tiesta put it, "Almost 30 years as a congressman and Bolsonaro was never a party politician." So, he created a coalition of four "groups" to win the 2018 elections.

"After 16 months in office, Bolsonaro realized he can't completely ignore political parties and Congress. The evangelicals didn't hold sufficient support in Congress and super conservatives made it more difficult to build a coalition," she explained.

Now, Bolsonaro is being mostly supported by economists and the military, but the latter group is not happy with the economic agenda that puts a big emphasis on privatization.

"In this context, Bolsonaro appointed more military people because he knows he has never been weaker and can't lose this support," Tiesta said.

Moro's resignation left the president with many challenges and, in addition, impeachment proposals continue to increase. By May 21, they were already 39, according to the Chamber of Deputies.

"It's difficult for the Chamber of Deputies to start the process of impeachment during the epidemic, because the priority is the pandemic crisis. However, nobody knows the result of Bolsonaro's political life," Zhou noted.

For Tiesta, the risk of impeachment appears when Congress and other groups have a consensus on the successor, that's what happened with Roussef and Collor. "Today, we don't have this consensus," she said.

"Bolsonaro lost support from electors, but we can't ignore he still holds a 25-percent approval. He is now making a move toward negotiating with parties, but maybe it is too late," Tiesta added, indicating that local elections later this year might be a good predictor of national elections.

The president's future, along with that of the country, hangs in the balance.