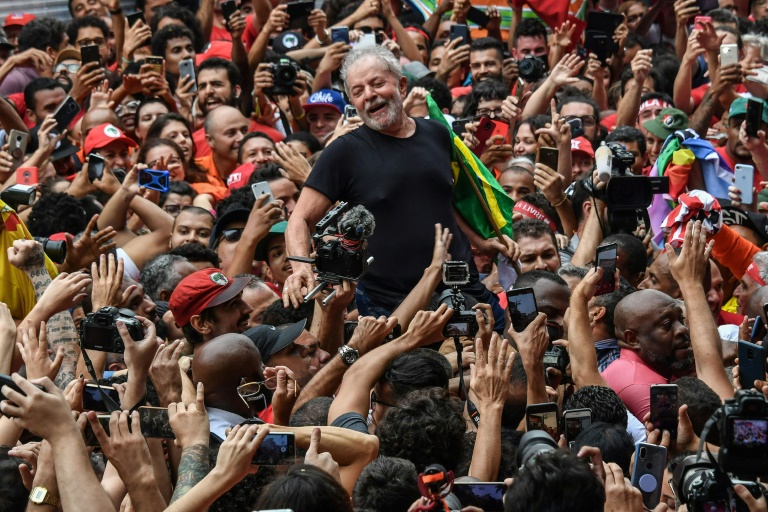 Brazil's former president Luiz Inacio Lula da Silva is carried on the shoulders of supporters outside the metalworkers' union building in Sao Bernardo do Campo, Brazil, on November 9, 2019. (Photo: AFP)

Reveling in the adoration of his followers at the metalworkers' union he once led, Lula attacked his arch-nemesis President Jair Bolsonaro, who hours earlier had called him a "scoundrel," and those who jailed him last year for corruption.

Lula was mobbed when he arrived at the union in Sao Bernardo do Campo, near Brazil's biggest city of Sao Paulo, as people jostled to hug and shake hands with the former shoeshine boy who rose to become one of Brazil's most popular presidents.

The compound was decorated with a huge banner of Lula's image and surrounded by a sea of supporters wearing red T-shirts and waving "Free Lula" flags.

"I am grateful that they released him from unjust imprisonment, from a fraud," Roque Enrique, 24, told AFP as she stood for hours waiting for Lula to arrive.

Tamara Blanco, 38, said Lula was the "best president Brazil has had... I always believed he would get out (of jail)."

Lula's release came after a politically sensitive Supreme Court ruling on Thursday that could free thousands of convicts.

A 6-5 decision overturned a rule requiring convicted criminals to go to jail after losing their first appeal.

Those convicts would remain free until they had exhausted their rights to appeal -- a process critics say could take years in cases involving people able to afford expensive lawyers.

Bolsonaro, who said on last year's election campaign trail that he hoped Lula would "rot in prison," told his Twitter followers Saturday that Lula was "momentarily free, but guilty."

The Supreme Court's decision and Lula's release provoked thousands of pro-government protesters to take to the streets in Rio de Janeiro and Sao Paulo on Saturday in opposition to the court's ruling.

Lula's criminal record prevents him from running for political office, at least for now.

But his freedom is likely to reinvigorate the rudderless left that has floundered since the charismatic 74-year-old was jailed in April 2018.

It also threatens to deepen political divisions in the country as the tough-talking Bolsonaro, who was swept to power last year on a wave of anti-left sentiment, goes on the offensive.

The court decision undermines a sprawling corruption investigation called Car Wash that has put dozens of political and business leaders behind bars, including Lula -- a probe supported by many ordinary Brazilians fed up with white-collar crime.

In an impassioned address on Friday to hundreds of supporters who greeted him as he walked out of the federal police headquarters in the southern city of Curitiba, Lula vowed to keep fighting for poor people.

"People are hungrier, they have no jobs, people work for Uber or delivering pizzas on a bike," Lula said in remarks sometimes drowned out by cheers from the crowd and fireworks overhead.

Lula led Brazil through a historic boom from 2003 to 2010, earning the gratitude of millions of Brazilians for redistributing wealth to haul them out of poverty.

He was serving eight years and 10 months for corruption and money laundering. He was sentenced to almost 13 years in February in a separate corruption case and still faces another half dozen corruption trials.

Lula has denied all the charges, arguing they were politically motivated to keep him out of the 2018 presidential election that he was tipped to win.

Justice Minister Sergio Moro, who convicted Lula when he was a judge in 2017, said Saturday that while the Supreme Court's decision must be respected, it could be "altered... by Congress" to allow the jailing of convicted criminals after their first appeal.

"I am back," Lula declared Saturday in his speech, calling Moro "not a judge, but a villain."

Moro, who joined Bolsonaro's cabinet in January, has faced calls for his resignation over leaked chats purportedly showing he worked with Car Wash prosecutors to keep Lula out of last year's presidential race.

Moro has denied wrongdoing and accused criminals of hacking the messages with the aim of overturning convictions resulting from the investigation.

Lula's political prospects could change if the Supreme Court were to decide in a separate case that Moro had been biased.

Despite his age, Lula made clear he is not going to sit on the sidelines.

"I'm a very young man. I am 74 from a biological point of view, but I have the energy of a 30-year-old," he said in a video posted on his official Twitter account Saturday.

That followed a video Friday showing Lula working out in the prison gym, lifting weights and running on a treadmill, to Survivor's classic hit "Eye of the Tiger."

"I'm going to Sao Paulo and afterward the doors of Brazil will be open so that I can travel around this country," he declared Friday.