WORLD Brazil's Lula likely to go behind bars in days

Brazil's Lula likely to go behind bars in days 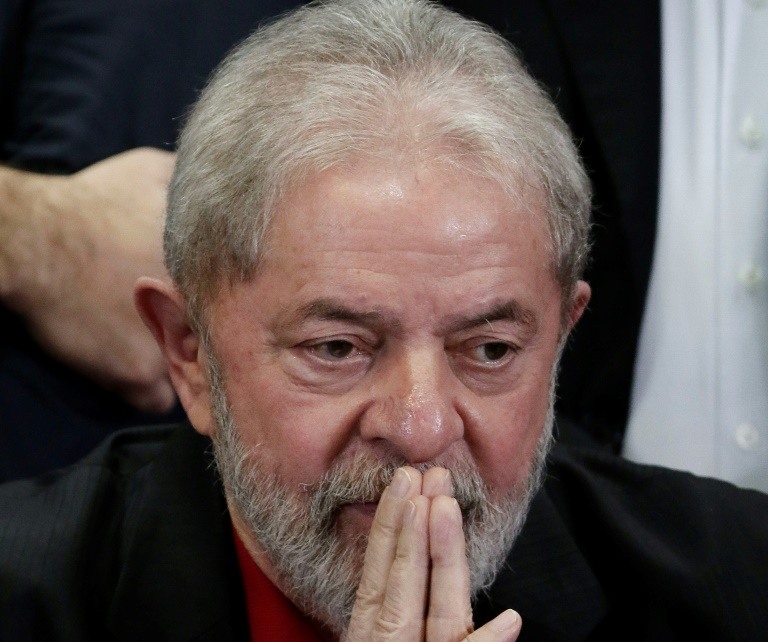 Luiz Inacio Lula da Silva is seeking a third term as Brazil's president and leads easily in opinion polls, but the Supreme Court's rejection of his effort to delay a prison sentence for corruption throws his electoral bid into doubt. (Photo: Reuters)

Lawyers for the founder of Brazil's leftist Workers' Party can wait until Monday to file a final, purely technical appeal with the lower court that in January sentenced Lula to 12 years and one month for corruption.

The appeal would almost certainly be quickly rejected and Lula, once one of the world's most popular politicians, would be ordered to start his sentence immediately.

Lula, who despite his legal problems leads easily in opinion polls ahead of the upcoming presidential election, had hoped the Supreme Court would grant him liberty while he appealed his conviction in higher courts.

But the Supreme Court ruled in a tense, nearly 11-hour session by 6-5 that because the 72-year-old has already lost a lower court appeal against his conviction, he must begin the sentence.

The ruling brought a tide of celebration on the right and among prosecutors supporting the epic "Car Wash" anti-graft probe, which has revealed high-level corruption throughout Brazilian business and politics over the last four years.

To them, Lula epitomizes the corruption-riddled system and his conviction on charges of accepting a seaside apartment as a bribe is "Car Wash's" biggest scalp by far.

But on the left, where Lula retains fervent backing, the Supreme Court ruling is seen as part of a right-wing coup meant to destroy the Workers' Party and maintain the current, deeply unpopular elite in power.

The Workers' Party tweeted that "the Brazilian people have a right to vote for Lula" and promised to take its fight to "the streets... right to the bitter end."

"A sad day for democracy and for Brazil," Gleisi Hoffmann, who heads the party, said.

Lawyers for Lula described the ruling as "violating the personal human dignity and other fundamental rights" of Lula.

In a statement released early Thursday they vowed to pursue the higher court appeals. "We have firm expectations that this conviction will be overturned," they said.

- Campaign from behind bars? -

Lula, who grew up poor and with little formal education before becoming a trade union leader and politician, says he will go down fighting.

Analysts say that his election hopes, which were already slim, have now been dealt a body blow. But he is not necessarily out of the count.

In theory, once someone has been convicted and lost their lower court appeal, they are barred from running for office under Brazil's clean slate law. But the issue will not be decided for months.

Even if he were barred, as seems likely, he would have an opportunity during that period to exercise influence on his followers, possibly preparing the way for a replacement candidate.

"The party's idea is to maintain his candidacy whatever the circumstances until the (election court) turns him down, and to start working on a name as plan B," Globo political columnist Gerson Camarotti wrote Thursday.

In the latest election polling, Lula scores more than 30 percent, with his nearest rivals in a crowded field getting only around half that.

Current center-right President Michel Temer -- who took over in 2016 after the hugely controversial impeachment of president Dilma Rousseff from Lula's Workers' Party -- is himself accused of serious corruption.

However, he has been shielded by Congress, which is dominated by allies, and has not had to face trial. A new poll from Ibope that was published Thursday showed only five percent of Brazilians think Temer's government is doing a good or very good job.