WORLD Brazil's passivity in COVID-19 control will affect US: experts

Brazil's passivity in COVID-19 control will affect US: experts 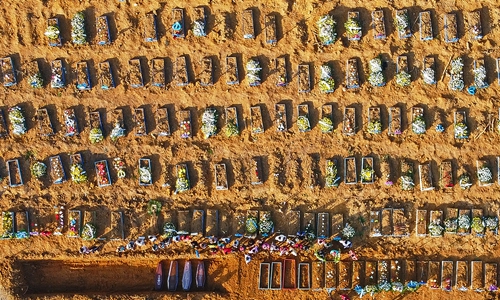 An aerial view of coffins being buried at an area where new graves have been dug at the Parque Taruma cemetery during the COVID-19 pandemic in Manaus, Brazil on Tuesday. Graves are being dug at a new area of the cemetery for suspected and confirmed victims of the coronavirus pandemic. (Photo: AFP)

Latin American countries, many of which are acting passively or lack the social management capabilities to curb the COVID-19 pandemic, are being warned of seeing an increase in infections, which Chinese experts noted could affect the US, which set a bad example in its economy-first strategy and inciting populism to divert domestic pressure.

Tedros Adhanom, director-general of the World Health Organization, said during a Wednesday briefing that South America will see an upward trend as most countries there are still in the early stages of their epidemics, and they will have to deal with the coronavirus for a long time.

As Latin America's worst-hit country, Brazil on Thursday reported 2,678 new infections, bringing the total to 45,757. The actual situation might be worse due to a lack of testing and bad hygiene. About 14 million Brazilians live in densely populated favelas without proper sanitation, The Guardian reported.

Distrust of Brazil's Jair Bolsonaro administration rose when the president sacked Health Minister Luiz Mandetta, whose insistence on strict management and social distancing got in the way of Bolsonaro's downplaying of the COVID-19.

The president described the disease as a "little flu" and said the economic devastation caused by pandemic control measures would be worse than virus itself.

Zhou Zhiwei, an expert on Latin American studies at the Chinese Academy of Social Sciences, noted that Bolsonaro is following US President Donald Trump in downplaying the seriousness of the pandemic at the early stage, and acting slowly with lax measures.

Populist sentiment is also mounting in the country and in the end, it is the Brazilians who suffer, Zhou told the Global Times on Thursday.

The Bolsonaro administration's passive epidemic-control strategy was due to his promise of reforms to rescue Brazil's devastating economic situation since 2015, according to Zhou. Lockdowns and social distancing will lead to economic stagnation, and if the economy is hit hard, it could be a blow to his career. Meanwhile, many local officials and legislators are calling for strict methods to curb the pandemic.

Bolsonaro is actually applying "herd immunity" strategy, but Brazil does not have the same medical resources and capacity as the UK, which means that as the pandemic sweeps the country, it will be impossible to treat patients in a timely way, Zhou said.

Brazil is facing severe shortages of medical resources in several states.  Intensive care units at hospitals in Sao Paulo are full and the city is racing to build makeshift hospitals. Manaus, the capital of Amazonas state, is running out of beds, medical equipment and testing kits, and its health system is near collapse, media reported. In March, then health minister Mandetta predicted that the health system would collapse in April and the curve would not be flattened until July.

Some countries have taken the initiative and done a better job than Brazil, including Colombia and Venezuela, which adopted strict measures to cut transmission. But shortcomings in effective social management and a lack  of resources are challenges for many Latin American countries, and analysts said the chaos in Brazil is likely to affect all of Latin America and even the US, which just announced a 60-day suspension of issuing green cards.

"Brazil faces a long battle against the virus. The US cannot shut its doors forever, so it might face imported cases from Brazil and the larger Latin American region due to its geographic proximity and close ties with them, Zhou said.

With a poverty rate of 30 percent, the outbreak will exacerbate social conflicts and the chaos would increase the US' costs in maneuvering in the region, Zhou said, noting that economic difficulties and political instability in Latin America could drive an emigration wave to the US.