Brazil's Temer says no threat of a coup amid truckers' protest 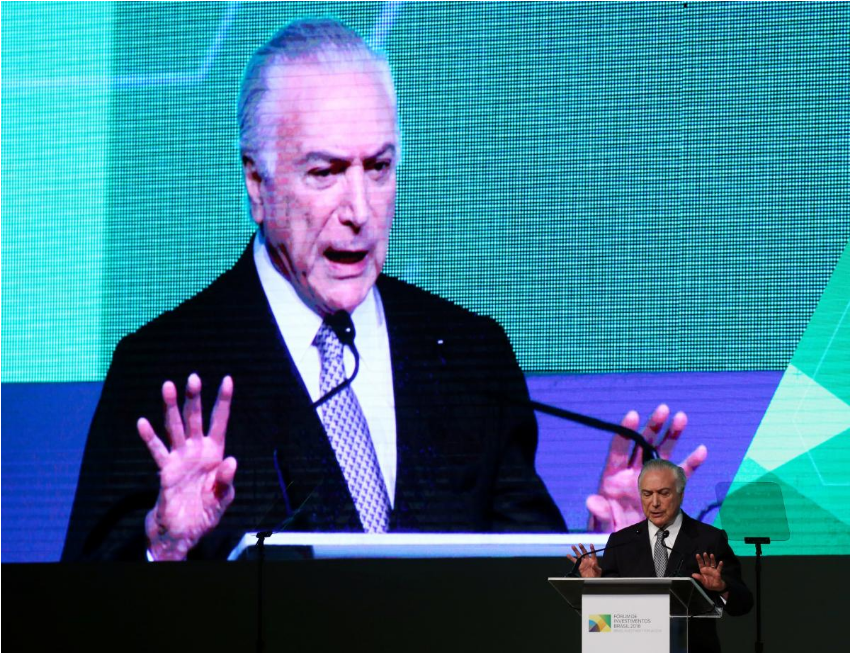 Brazilian President Michel Temer said on Tuesday there was no chance that a nationwide truckers’ protest that has paralyzed Latin America’s biggest economy will spark a military coup and topple his government.

Temer, speaking to a small group of foreign journalists at an investment forum in Sao Paulo, batted down questions about risks of a military intervention.

The nine-day trucker demonstration against diesel price hikes has emptied roads and left major cities running short on food, gasoline and medical supplies. The nationwide protest has been has been slow to unwind despite a raft of concessions that Temer offered over the weekend.

Some striking truckers are calling for a coup, it is a hotly debated topic on social media, and fringe groups who want the military in charge have been a constant presence during many anti-government protests that have taken place in recent years.

Polling shows that Temer is Brazil’s least popular president since the nation’s 1964-85 military regime ended. He remains under investigation on graft allegations.

If Brazil’s Prosecutor General Raquel Dodge were to decide to charge Temer, it would be up to a congressional vote on whether or not he would be tried before the Supreme Court.

Temer last year fought off two such corruption charges. But it is not clear that he retains congressional support to survive any potential new charge, especially ahead of general elections in October and with Brazilians in polling consistently demonstrating deep dissatisfaction with leaders across the board.

Brazil’s government has started talking tougher against the trucker protest, threatening to crack down on alleged political agitators contributing to the crisis.

“Starting today, we will begin to find those infiltrators and we will fine those companies,” he said in a radio interview, adding that antitrust agency Cade would also investigate the fuel distributors involved. “They know the price they will pay for the suffering they have imposed on the Brazilian people.”

The more aggressive stance underscored the government’s mounting urgency to end the protest.

The highway blockades and fuel shortages have halted industries from automaking to sugarcane crushing, hammering exports of everything from beef and soybeans to coffee and cars.

Some factions within the loosely organized trucker movement have added to demands and ignored a call to demobilize by industry group Abcam, which spearheaded the early protests and says it represents 600,000 drivers.

Oil industry regulator ANP said fuel distribution had begun to improve in cities such as Rio de Janeiro and the capital Brasilia but it remained scarce in several regions including the business hub of Sao Paulo.

It will take at least a week for fuel distribution to return to normal, according to ANP.