A song protesting sexual violence that has become an anthem for women across Latin America was the focus of a demonstration Friday in the capital of Brazil, where women are increasingly willing to denounce aggressors. 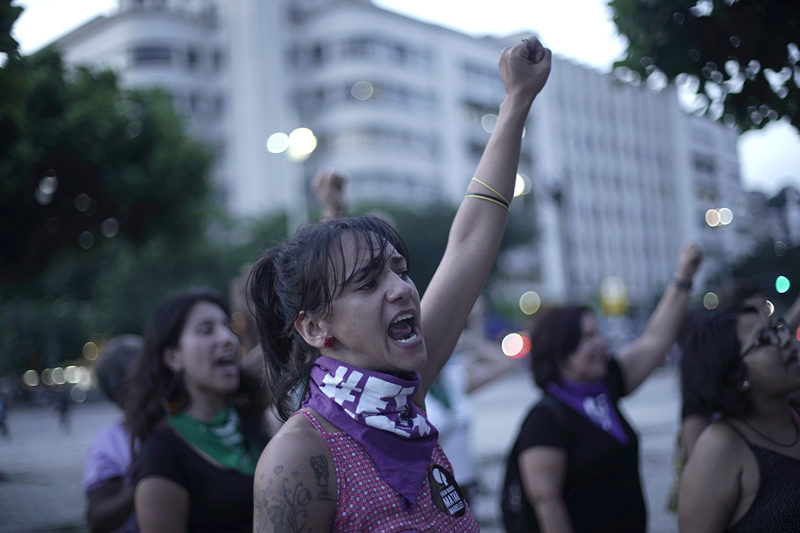 Women perform the feminist anthem "A rapist in your path," in a demonstration against gender-based violence in Rio de Janeiro, Brazil, Friday, Dec. 13, 2019.

About 200 women wearing blindfolds sang the song “The Rapist is You,” whose matter-of-fact lyrics absolve victims of any semblance of guilt and blame a patriarchal justice system for a failure to hold those responsible to account. They performed in front of the Supreme Court holding signs with names of slain women and dancing the steps now known the continent over.

“This movement is important to denounce violence against women,” said Liss Fernandez, a Chilean photographer who helped organize the demonstration. “The movement is being realized to support the fight of women in Chile, Brazil, and in Latin America.”

Created by the Chilean feminist collective “Lastesis,” the song was first performed late last month in that South American country’s capital of Santiago amid widespread anti-government protests that elicited a harsh crackdown by security forces.

As the Brasilia demonstration went on, a separate group organized and carried out the same presentation in Rio de Janeiro. They ranged in age from elderly women to a pre-teen girl, who wore a green kerchief wrapped around her neck. It said: “It’s for the lives of women.”

The song has found fertile ground in Latin America's largest country, where macho culture historically has been taken for granted and crimes against women are vastly underreported. That situation has gradually changed in recent years with passage of laws specifically aimed at addressing domestic violence, femicide and rape, as well as educational campaigns and social movements promoting awareness.

In Rio de Janeiro’s famously libidinous Carnival celebrations, for example, women since 2017 have increasingly sported temporary tattoos saying “No means no!” to ward off would-be assaulters.

“Situations that were normalized years ago aren’t anymore,” Samira Bueno, executive director of the non-profit group Brazilian Public Security Forum, said by phone. “Many women who live in situations of violence now understand that they can live a life free of violence — that the violence doesn’t need to be a constant in their lives. There are laws.”

Brazil’s national survey of victimization in 2013 estimated that just 7.5% of sexual violence victims notified police. That was one-third the level at which U.S. rape or sexual assault victims report, according to a 2018 report from the U.S. Department of Justice.

Last year, the number of Brazilian women who reported being raped reached at least 53,726, according to data from the Brazilian Public Security Forum. The tally doesn’t include four of Brazil’s states that don’t break down rape cases by gender. Brazil’s legal definition of rape is broader than that of the U.S. and doesn’t necessarily require penetration.

Brazil has seen a broad-based decline in crime in 2019, particularly homicides. Yet preliminary data indicate a continued rise in the number of rapes and domestic violence incidents, Bueno said, though she added that appears to largely reflect women’s greater willingness to report crimes.

The data also show greater police willingness and training to classify homicides as femicide when appropriate, Bueno said. One case that made headlines in early 2019 was that of Elaine Caparroz, a woman in her mid-50s who invited a law student she met online to her Rio apartment. He drugged her and spent hours beating and biting her, at one point pulling a drawer from a chest and slamming it down on her.

Caparroz spent four days in intensive care with several facial fractures and her eyes swollen completely shut. The case was classified as attempted femicide and, speaking publicly at an event in May, Caparroz encouraged fellow women to report such crimes. “Let’s fight for this to decrease, and to end,” Caparroz told the audience in Sao Paulo. “Let’s fight for our rights, women. Let’s be courageous. Keep our heads raised, not feel shame, not feel humiliated, and move forward.”